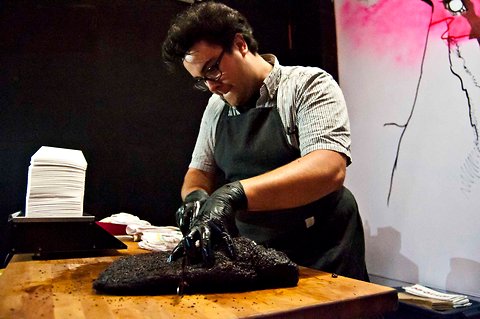 1) The Basics at BrisketTown: In this HRN special segment, Hunter Augeri and Daniel Delaney, recently crowned the "Brisket Kings of New York City," insist on simplicity when it comes to their brisket: just salt and pepper. Before opening their Williamsburg meat haven BrisketTown, Augeri and Delaney put their beef through a series of tests, toying with minute variations in proportions and preparations, and soliciting public input on each iteration. Delaney describes why they chose to take on brisket:

[Brisket] had the most lore around it. It's sort of the evil villain in the barbecue scene, the one that nobody gets right. It's easy to make pulled pork, its easy to makes ribs, they're just so much more forgiving, but brisket is not. They don't have king of pulled pork of New York, I don't know what it is, it's just unsaid. 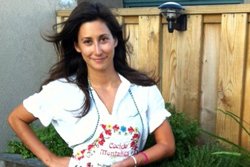 2) Roberta's Tara Norvell on How a Kitchen Should Be Run: Michael Harlan Turkell invites Tara Norvell, Roberta's new sous chef, into the radio station to talk about how cooking drove her away from a career in fashion design and into kitchens in London and New York. Raised on elaborate, home-cooked Spanish meals, Norvell never tasted sushi or Thai food before coming to New York at the age of 21. The unconventional path she took to get to working the line has shaped her view of how a kitchen should be run:

You can just feel the difference when you have a plate full of love rather than a plate that was just put together by different people. At Trullo [in London], we'd come in in the morning, discuss what we wanted to put on the menu around coffees, and as a family say, 'what should we make today?' And then we'd make the menu, make the food, and you'd just have so much more of a connection with the food. We'd be shelling beans, talking over shelling beans, hanging out, and cooking service. It was just a lot of fun. 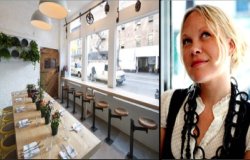 3) Heather Tierney, Slinging Juice in Little Italy: Joe Campanale sits down with Heather Tierney, the cocktail maven who runs Apotheke and Pulqueria, to talk about the drink organization system at Apotheke, pulque supremacy, and her new project The Butcher's Daughter, a juice bar and vegetarian cafe in Little Italy. Tierney explains her shift into non-alcoholic beverages for her the spot:

I got into juicing a couple summers ago. I went out to LA, and the food is so healthy and fresh, and everyone is into juicing. I came back and bought a juicer and started experimenting with produce. The thing is, at Apotheke we have a juicer as well, and we have an herb garden on the roof that no one really knows about, and we make juices that are alcoholic. The way we approach cocktails at Apotheke is the inspiration for how we approach the juice at Butcher's Daughter: we have Simple Juices and we have Heritage Juices. 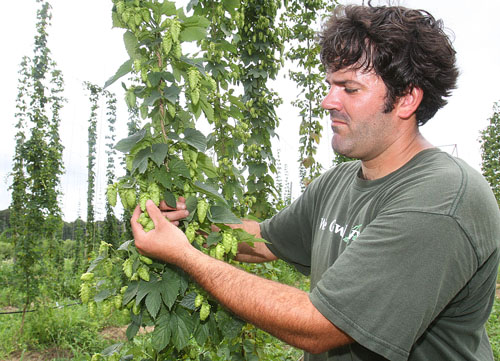 4) The History of New York Hops: John Condzella is bringing local hops back to home brewers and microbreweries in the New York area. A fourth-generation farmer, Condzella grows his hops on the North Fork of Long Island on his two year old Condzella's Farm, which was recently revitalized thanks to a successful Kickstarter campaign geared towards the purchase of a Wolf WHE 140 Hopfen Pflückmaschine-a German hop harvesting machine. Here's John on the rich but forgotten history of hops in New York:

About 100 years ago, there's a saying that hops were king in New York. They produced 80% of the nation's crop, at the peak it was about 21 million pounds a year. That's a lot of hops. Upstate New York has a lot of dairy farms but before all those dairies, most if not all of those farms were hop farms?It was a combination of a widespread blight and prohibition that put an end to New York's hop production and everything moved out west to where it is today. 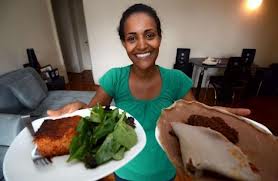 5) Ethiopian Chef Kubee Kassaye: When Kubee Kassaye moved from Ethiopia to Queens at thirteen, the only English words she knew were yes and no. She went on to graduate from the New York College of Technology at the top of her class and eventually became the chef at Peninsula Hotel in Manhattan, her first job cooking outside her home. Her success and her cooking have earned her the Les Dames d'Escoffier International Legacy Award. On what's next:

My dream is to open my own restaurant, an Ethiopian-Italian restaurant. Everybody has Ethiopian restaurants, but I want something different, to expand out. I like Italian food and Ethiopian food. They compliment each other.