Something about the padded, sequestered interior of Le Périgord, the French haute cuisine holdout on east-east-east 52nd Street, turns people into librarians. Nobody at a typical lunch shift at this nearly 50-year-old restaurant talked much above a whisper. And yet the air—which smelled vaguely of your grandmother's living room—is so still (no music inside, no traffic outside) you could clearly hear conversations a few tables away.

"You go to this restaurant to feel like a human being," said a man to his friend. I pegged the speaker being in his late 50s, but later realized that he was a well-preserved septuagenarian. No one in the room, waiter or patron, was under 40. When a pair a twentysomethings came in later, they were so befuddled by the unfamiliar scene of relaxed gentility that they seated themselves, thinking that was OK. The maître d' soon resituated them.

Le Périgord is still owned by Georges Briguet, who bought the place from the original owner two years after the restaurant opened. Without too much mental effort, one can guess the sort of celebrity that came here once upon a time. Truman Capote, Henry Kissinger, Jackie Kennedy, etc. Plus, a regular salting of nearby UN officials. And, of course, your run-of-the-mill, blue-suited moneybags who thinks Kissinger wasn't so bad, and Capote was mean to write that stuff about Babe Paley in Answered Prayers.

My relatively talkative neighbor was certainly a regular—so regular that he asked whether a favored lamb dish that wasn't on the menu was available. It was. "Well, why don't you put it on the damn menu then?" he muttered as the waiter walked away. (Just because the customers look polished doesn't mean they are. My friend dropped an F bomb every other sentence, and talked with great relish about past trysts.) "I have some friends coming into town and they asked for restaurant recommendations," he told his more docile friend. "I thought of sending them here, but thought they might think it too dull. So I told them to go to Le Grenouille." 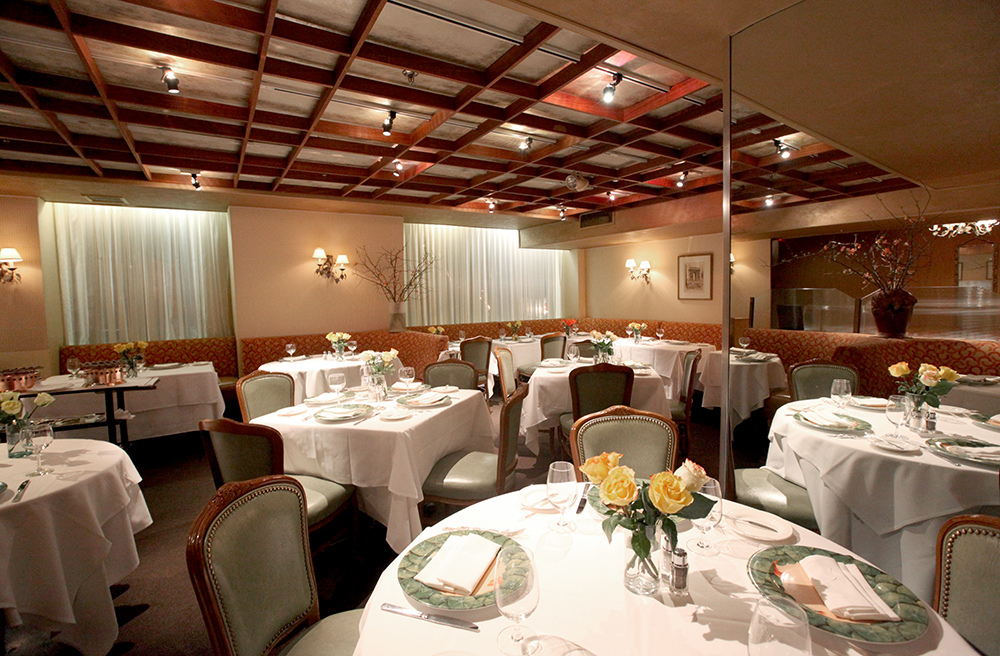 I took my neighbor's tip and ordered the wonderful Le Buffet Froid—a delicious selection of chilled asparagus, celery, cheese, pâté, cornichons, shrimp, tomato and other tidbits. Almost a meal in itself, it was sublimely satisfying. I followed that with Sole Meunière, grilled with a mustard sauce. Hey, if I'm in a place like this, I'm going to order a dish like that. It was worth the $45 just to watch the waiter expertly bone the fish tableside. Where does that happen anymore in Manhattan? Plus, the fillet was delectable; the veggies perfectly steamed. There was a dessert trolley—of course there was!—but I passed. The espresso was expert.

My neighbor had moved on to the topic of money. Actually, he seldom left it. Most conversations at Le Périgord are about money or old times. The two men reminisced about sitting on stoops in Brooklyn back in the days when they had no scratch. Recently, the guy's house was reappraised at a value of $4 million. He seemed to be in the art game. "25 years ago, I could have told anybody I knew how to get rich. You buy a Hopper etching for $500. Today, it would be worth $150,000." He laughed. "Why didn't I do that, and make myself rich?"

His friend paused briefly over his pâté. "But, you did," he replied.

—Brooks of Sheffield
· All Coverage of Le Perigord [~ENY~]