Patrick Cappiello on Building the Wine List at Pearl & Ash

For several years, Patrick Cappiello was the Sommelier at Gilt Restaurant inside The Palace Hotel. While there, he added to a large wine list that focused on the classic wine regions of the world, in the style of venues like Veritas and Tribeca Grill, where he had worked previously. When Gilt closed recently to make way for an upcoming project from Michel Richard that Patrick will also be involved with, Patrick faced a break in his work schedule. Without much to do at the hotel during the construction period, Patrick took some time off, travelled to Europe, and designed a wine program for a different restaurant, called Pearl & Ash, which recently opened in Nolita. This was Patrick's first opportunity to design a wine program from scratch for an opening. Going against the grain of downtown's small wine list trend, he has developed a sizable program that again plays to regions like Bordeaux and Burgundy, and which doesn't hesitate to go far north of the $100 mark. But does Bordeaux sell on the Bowery? Eater caught up with Patrick to ask him a few questions about the transition.

What was the vision for Pearl & Ash? Patrick Cappiello: The concept is that we — myself, Richard Kuo the chef, and Branden McRill who is the GM — want to create a restaurant that we'd like to eat at. The chef lives right around the corner from me, so it is our neighborhood, we both live down here. We wanted to create a restaurant that was the kind of place that we wished was in our neighborhood, that we would want to eat at, that we'd want to drink at. And to do it in a way that is financially approachable to people, which is something that is missing.

Most chefs who want to create really beautiful, well-balanced food made from great products have to go to Williamsburg to do it. Also, people who want to create a wine program that is based on creating a great value, and really trying to source excellent wines with age that have good provenance, the kind of wines that I want on a wine list that I drink off of, they tend to be not so much in Manhattan. One of the benefits we have is that our owner owns the building, so there is less pressure to generate tons of income. We still want to make money, but first and foremost we want to create something we are excited about. Low markups on the wine list, even when I was in Midtown that was the goal. What I did and what I will continue to do at The Palace shared that same goal.

How did you get involved with Pearl & Ash? This whole thing happened because I met the chef, Richard Kuo, who was one of the co-chefs at Frej, which is now Aska out in Kinfolk Studios in Williamsburg. I went and had dinner there and I was really impressed with the food. Richard remembered me because he had staged at Gilt at one point. He later came to Gilt and dined with us and we exchanged contact info and just kept in touch. As his relationship ended with Frej he was kind of in limbo for a few months where he didn't have too much going on, and we would just get coffee and catch up. And during that time the announcement about Gilt's closing came about, so it was kind of like two guys going through a really weird time in their lives. And then he hit me up one day with a text message saying he had found a new place and he reached out to me about putting together a wine list for them. I met with the owner and the statement I made to them was, "I don't know how to make small wine lists." I said, "If you are looking for somebody to put together a 20 bottle wine list, I'm probably not your guy." Putting together a 20 bottle wine list that is going to make everyone who walks through the door happy isn't something I have a working knowledge of. After a lot of discussion with them, I put together a proposal with a minimum of 100 selections. I ended up pushing that to almost 300 selections now, and I'm thinking of doing more. I want it to be exciting and somewhere people come to drink wine. 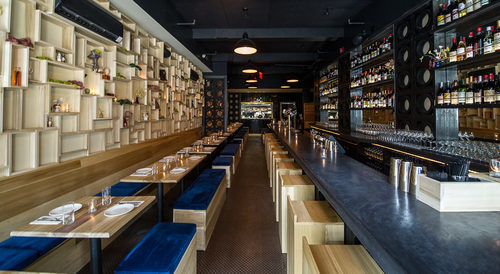 [Pearl & Ash by Daniel Krieger]
How is Pearl & Ash different from Gilt? First of all, we are going to be a restaurant that is open late. I remember moving to New York and people talking about Blue Ribbon. Even living in this neighborhood I can tell you that if you want to get something to eat after 11 p.m., it is almost really hard to find something. We are already committed to the kitchen being open until midnight on weekdays and 2 a.m. on the weekends.

In terms of the wine list, did you design this list differently than what you did at Gilt? I remember tasting wines like Francois Chidaine Montlouis, and I remember thinking they were so great and wanting to pour them by the glass. But Monlouis-sur-Loire, that's something you can't really put on a Midtown menu because nobody knows what it is. Vouvray you can. So I always worked with Chidaine's Vouvray, even though I think his Montlouis is better. So I was so excited because the first wine I put on the Peal list by the glass was a Chidaine Montlouis and that's a wine that I buy at a wine store in my neighborhood and drink often, a wine that I bring to parties and turn friends on to. And the second wine I put on by the glass was a Lambrusco. I love Lambrusco. As a kid, my Grandmother always had Lambrusco in the refrigerator. That was my first wine experience when I was 12: my Grandmother giving me a sip of the Lambrusco that she used to drink on Sunday afternoons. It has always been a wine that I've loved, but I couldn't pour Lambrusco in Midtown.

So, with the by the glass selection, there are already differences. I mean at Gilt I was pouring Dom Perignon by the glass and down here it is sparkling Montlouis. That's the best example of the difference. It's still my style and the kind of things that I like and the way I like to do it, but it's what I can afford to drink as opposed to what my clients can afford to drink.

There were things that I gleaned from the Gilt experience, and there were things that I always wanted to do that I couldn't, like wines from the Jura. I never had wines from Jura, red or white, on the list at the hotel because I didn't think they were wines that anyone would want or understand or drink. Now I have wines from the Jura on a list. But I also have Kistler and La Spinetta on the wine list. Anybody who makes a wine list based just on what they want to drink and only what they want to drink, all you are going to do is make people mad. I don't want people to feel scared when they look at the wine list. I think you have to be smart about it. I want to have a least three wines that anybody, no matter where they are in their wine drinking career or wine experience, will be like, "Wow, I want to drink those wines." There is nothing worse than looking at a wine list and being like, wow, I don't recognize any of these. I wanted to do a wine list for everybody, but I wanted to do it in a scaled down version from what we had at Gilt. 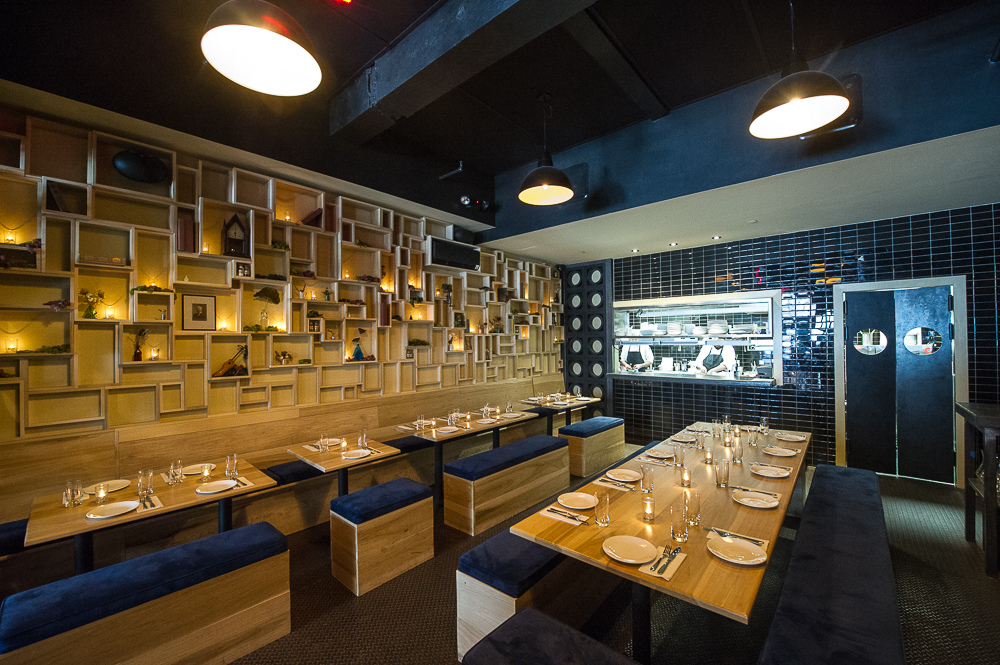 How much do you envision yourself being at Pearl & Ash? Right now, I'm not at the hotel, and I have the availability to do it, and I'm on the floor all the time. As the owner sees the vision for the wine program, he may want to add someone on the staff to be at Pearl. The guys at the hotel are fine with it. They told me to go find something to do until the construction there is done, which I did. I think the owner at Pearl needs to see the ripple effect of the wine sales and then he may employ someone on the floor in the future. That's how I see my role right now: I'm the shepherd until I can find an assistant shepherd.

A number of the wines on the opening list — over half of the list — are $100 a bottle or higher. How is that playing out in terms of the downtown location? I think we do balance that with a number of options that are under $100 or even under $50. I think it is the job of the wine buyer to bring the best possible bottles at every price point. You or I can say all day that there is plenty of great wine that costs $40, but if a guy likes Grand Cru Burgundy I've never had a $40 bottle of wine in a restaurant that tastes the same as Grand Cru Burgundy. It may seem crazy to say that you may disappoint people by not putting expensive bottles of wine on your wine list, but it is the truth. And you are also depriving your business of revenue. By putting bottles on the list that are over $100, that are over $200, that are up to $1,000... I mean we have a bottle of Chateau Haut-Brion 1999 and that is $995 and that bottle will sell eventually. Someone will roll in and drink that bottle of wine. Like I said, we want to offer something for everybody, even for rich people. And I think there are expensive wines on the list, but they are also a good deal. If you know those wines, which have a lot of age of them, and how they are smartly priced, I guarantee you that they will sell.

There is a significant amount of Bordeaux on the opening list. What is it like selling Bordeaux in a downtown setting? Bordeaux is a part of my background and a part of who I am, and it has been a big part of pretty much every restaurant I've ever worked at. When I started at Veritas I used to sell a bottle of Chateau Haut-Brion 1989 every three days. When I started at Gilt I got a tremendous amount of wine from Chateau & Estate. I knew the wines, and I loved the wines. And then this past summer I had an opportunity to go and visit Bordeaux. Bordeaux is in my blood and I believe in it, and I put the wines on the list because they are wines that I love and that I appreciate and that I think age well. I think that people who know wine know that Cabernet has the innate ability to age. Those older wines have always been really rewarding for me when I open those wines.

How do you see the wines on the list pairing with the food? Richard's food is beautifully presented and complex, but all about balance. And that's the thing for me. That's what makes it wine friendly. Although there is a lot going on with the dishes, it is balanced. He is keeping it very focused.