Share All sharing options for: Four Months After Sandy, Restaurant Workers Look Back

This is a look back at the last four months of post-Sandy life for many restaurant workers. Have your own story you want to tell, either anonymously or on-the-record? E-mail us. 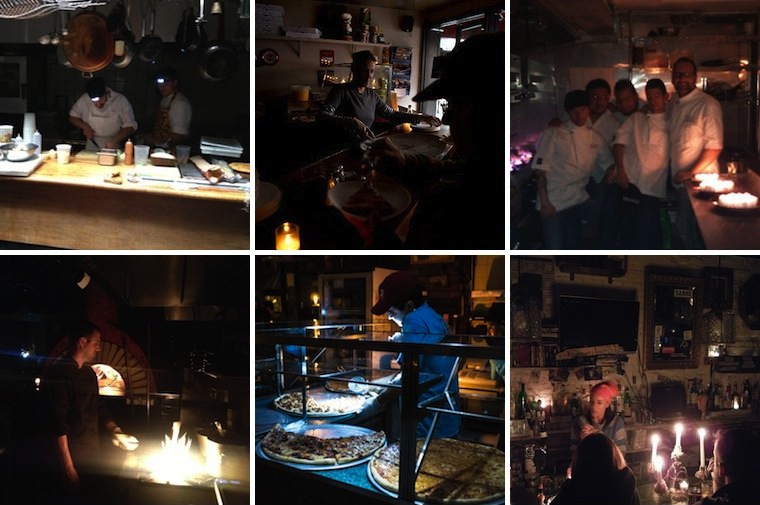 Chefs, cooks, and others working by candlelight immediately after Sandy. [Photo credits]

Shortly after Hurricane Sandy hit the Northeast, wiping out entire neighborhoods across the region and killing power to all of Manhattan below 39th Street, a minor movement was born: Eat Down Tip Up. It was a short-lived Tumblr and a hashtag on Twitter, both existing to allow people to share pictures of or at least talk about eating in downtown Manhattan restaurants and tipping well.

The movement's effectiveness is debatable?the Tumblr stopped posting on November 8 and the Twitter hashtag slowed down by mid-December?but the logic was simple. Restaurants operate on such razor-thin margins that are basically without parallel in the business community and any disruption could be back-breaking, even for restaurateurs whose operations didn't sustain any physical damage. And for workers, both tipped and untipped, that loss of income and the slow business immediately after the storm had lasting financial effects.

Many?maybe even most?workers' lives are back to normal, but for many others the storm is still ongoing.

Immediately After the Storm

On October 30, 2013, the day after the storm, Beth Trimble put on her coat and boots and, joined by her husband and five-year-old son, started walking from her home in Prospect Heights to the South Street Seaport, where she worked as the Kitchen Manager at the casual organic restaurant Made Fresh Daily. There a scene played out that was seen across downtown Manhattan and the outer boroughs, as owners, managers, and skeleton staffs assessed their damage, began cleaning, and, in some lucky cases, began serving again (or continued serving) as soon as possible.

Why make the trek from Brooklyn or Queens or elsewhere to your shuttered restaurant, even with transit down for those first couple of days? For Trimble and others Eater spoke to, it was a combination of loyalty to their employers, a desire to help out however possible, and (of course) to not lose their jobs. As Trimble put it, "I was afraid that if I didn't show up, there would be no reason to pay me and I need to get paid, so even though it was ridiculous to walk 2 hours each way, and I was in pain at the end of the day, I did it."

Made Fresh Daily was without power for six days, during which time Trimble and her family, along with the restaurant's owners and landlord (who contracted a work crew to help), cleaned the place up and figured out what needed to be replaced. It was able to reopen on November 15, two and a half weeks after the storm.

The story was similar for Kathleen Joyce, a bartender at Meade's, a bar and restaurant also in the South Street Seaport. Like everywhere in that heaily-damaged neighborhood, Meade's took on a ton of water. The immediate cleaning effort was aided, Joyce says, by neighbors and customers who showed up to help out. By Friday, the restaurant still didn't have power and was "days, weeks from having a working kitchen," but like many places around the city the crew was able to set up a makeshift cash bar. At the end of the first night, such was the support from a relieved customer base that the plastic cup acting as the "register" and the tip cup were filled almost equally.

The New York State Department of Labor saw over 158,000 new claims for unemployment in November 2012, the highest level since the height of the recession, according to the New York Times. The state as a whole had lost 29,100 jobs because of the storm, though it's unclear how many of those jobs or unemployment claims were in the hospitality sector. (The Department of Labor did not respond to requests to comment for this story.) But clearly claims were being filed.

Nonprofits got into the act as well, creating funds for temporarily unemployed workers. A group called Modest Needs set up a fund for service industry employees, as did the advocacy group Restaurant Opportunities Center, which gave out funds in stop-gap increments of $500 to 115 workers who were ineligible for state or federal aid.

Despite the Department of Labor setting up a system for specific Sandy-related aid, roadblocks to that aid existed. Several restaurateurs recently accused the state of misleading them on the sorts of aid available for employees. Additionally, State unemployment isn't available for anyone losing less than a week of work, and many city restaurants were only closed for six days. (In addition to its other work, the ROC has been advocating for a change to this policy.) And Sandy unemployment aid requires a two-step process, with workers first having to get disqualified from regular unemployment to make them eligible. All of which delays the aid and forces out-of-work employees to get creative in order to pay for bills and food.

A line cook Eater spoke to?whom we'll call "Marco" to protect his employment?was out of work for a month. Marco is originally from Mexico but now lives in Queens, traveling with several coworkers to his downtown Manhattan restaurant for three days after the storm to help clean. He and his coworkers were paid for the few days they helped clean and make initial repairs, but not for the next month while the restaurant got a completely new kitchen. It's unclear why Marco didn't pursue state aid, but he didn't. Like many others, for food and basic bills he had to rely on family members who also work in restaurants, and whose restaurants were less affected by the storm.

Go to most restaurants in Manhattan below 39th Street and it's hard to tell that a hurricane hit just four months ago. Many workers in this large swath of the city say that, after the initial shock, things are essentially back to normal, especially in the bigger restaurants. But walk around the South Street Seaport, or stretches of Avenue C in the East Village, or hell, go to Staten Island or the Rockaways, and the story is different. As Adam Weprin of the still-shuttered Bridge Café put it earlier this week, the Seaport "is a ghost town ... People don't even know that we are closed. People have no clue that this corner of Manhattan has been hit so badly." 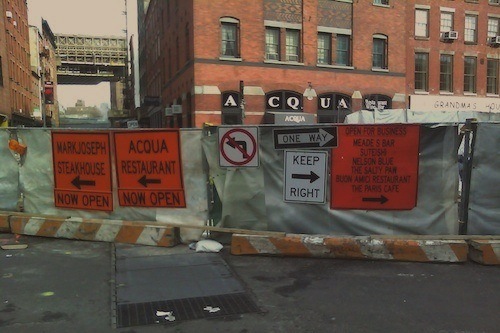 Joyce, from Meade's Bar, set up a Facebook page with a friend called South Street Seaport Lives to track the neighborhood's return. But, she says, the amount of news to post on that page is less and less with every passing month, even though the neighborhood is still far from return. She describes herself as "extremely optimistic," but admits to having been "very scared" at times. As she told Eater two weeks ago, "We still have butts in seats and that makes me feel good, because it's so depressing here."

Meade's owner Lee Holin?the youngest son of Jeremy Holin, who owns Jeremy's Ale House around the corner on Front Street?says that the full effect of the storm won't be felt until the summer. The winter months are typically slower in the tourism-driven Seaport. A full return to normalcy by the summer will rely on the Seaport's apartments reopening in time, along with (more importantly) the various office buildings that are still closed and whose white collar employees drive the Seaport's lunch business.

Made Fresh Daily's Beth Trimble, on the other hand, decided to leave that restaurant at the end of January to open a wholesale catering business closer to her home in Brooklyn, describing the process of helping get Made Fresh Daily back open as "empowering in a way, a weird way." She estimates that it could be another year before business is back to normal. Meanwhile, the Village Voice reports today that the restaurant's owner Jacqueline Goewey has tweaked the menu to become more efficient in the new Seaport.

And for Marco, while his restaurant reopened after a month, he's found his hours cut. While before the storm he would work 50 hours a week on average, his schedule's been rearranged such that now he never gets more than 35. He hopes his hours will be back up by March or April, but that will depend on business getting back to normal.

All of which is to say: until further notice, #EatDownTipUp.
· All Coverage of Post-Sandy NYC