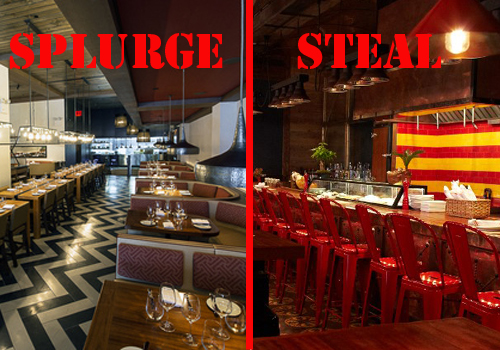 1) Manzanilla/Cata: Earlier this month, acclaimed Spanish chef Dani Garcia opened Manzanilla, a "Spanish Brasserie" that serves traditional and modern tapas as well as entrees like suckling pig and monkfish cooked on the plancha. The early word suggests that Garcia has a hit on his hands, but dinner at Manzanilla does not come cheap. Most of the "snacks" are over $10, appetizers are priced in the mid teens, and the entrees are in the mid 20s and low 30s. For tapas as well as Spanish-influenced brasserie dishes at a more relaxed price, head to Cata, the new Lower East Side restaurant from the team behind Alta. Both restaurants serve things like sea bass crudo, foie gras, grilled octopus, and mixed seafood with rice, but at Cata, most of the small plates are under $10 (seafood dishes hover in the mid teens), and proteins like the Peking duck breast and the skirt steak are priced around $15. You'll definitely want to order a few plates per person, but at Cata, you can try a lot of food and escape for around $30 a head. [Photo, Photo] 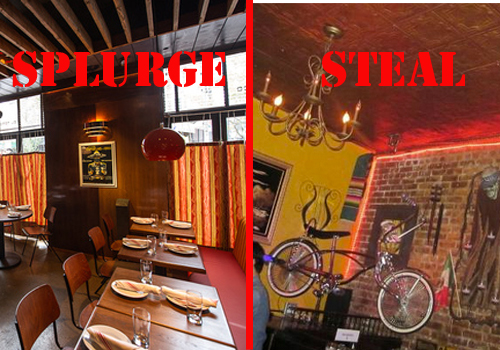 2) El Toro Blanco/Florencia 13: John McDonald and Josh Capon recently opened an exciting new Mexican restaurant in the Village. The best dishes at El Toro Blanco are made with salsas that have a fresh quality that you don't often find in New York Mexican cuisine. Although it's not an expensive restaurant, per se, this is one of those places where you want to order a lot of things eat, plus enough drinks to keep the night loose and fun. If you can't afford to pay $24 for entrees and $14 for drinks — or if you can't get a table on a busy weekend night — check out Florencia 13, just a few blocks away on Sullivan Street. Florencia 13 has developed a strong following among Southern California expats who love spicy, saucy LA-style Mexican fare. Here you'll find similar snacks, tacos, enchiladas, and protein-based entrees for three to five dollars less per plate, and the larger dishes also come with rice, beans, and guacamole (most of the entrees at ETB come without sides). The dining room is not anywhere near as stylish as the one at John McDonald's restaurant, but the space at Florencia 13 has a fun, SoCal dive bar vibe. [Photo] 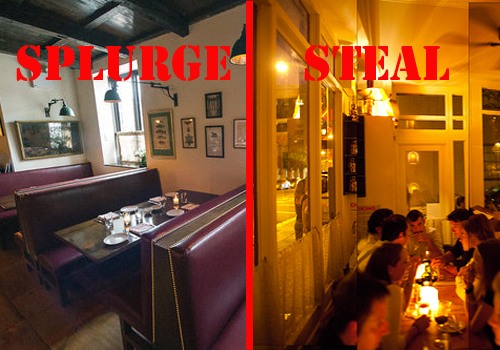 3) Perla/Malaparte: Perla's chef Michael Toscano makes excellent pasta dishes, and he has a knack for preparing beef and game. He's a very inventive chef, working in a hip Italian restaurant. Malaparte over on Washington Street does not have a young gun chef in the kitchen, but it does have a menu of fresh and satisfying Italian fare, and the dining room is cozy and cool. Start with the sausage and polenta ($11) or the mussels in spicy tomato sauce ($9), then move on to spaghetti carbonara ($16), pasta with clams ($16), or the roasted pork chop ($19). Unlike Perla, where the pastas start at $18 and most of the entrees are in the high 20s, almost everything on the menu at Malaparte is under $20 (steak and branzino are the only exceptions).[Photo, Photo] 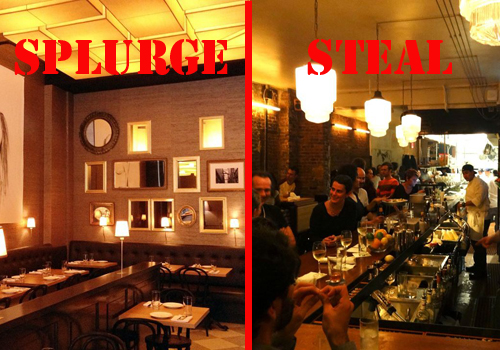 4) Maysville/Mayfield: Pete Wells was very impressed by Gramercy Tavern vet Kyle Knall's nuanced version of Southern food at Maysville. His dishes have a lot of components, but the chef knows how to put them together so that no flavor gets obscured in the mix. If you want a taste of exciting New American food, but you don't want to pay $26 for an entree, consider Mayfield, a new Crown Heights hot spot with a similar menu (and a similar name). The chefs here are Jacques Belanger (formerly of MP Taverna) and Lev Gewirtzman (formerly of Ouest). Like Maysville, the menu includes things like oysters on the half shell, a Brussels sprouts salad, smoked fish, pasta, scallops, and a pork entree, but at Mayfield, most dishes clock in under $20. Maysville offers a crispy chicken leg with potatoes, while Mayfield serves crispy fried quail with spoonbread. At the moment, both restaurants are very, very busy. [Photo, Photo] 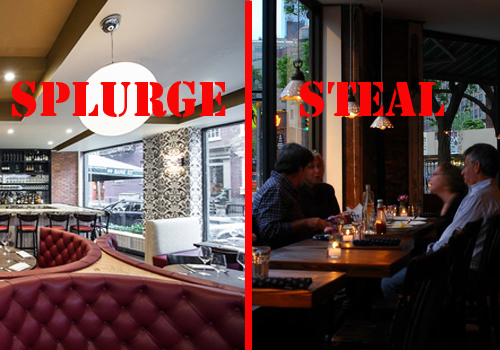 5) The Marrow/Doma Na Rohu: The menu at Harold Dieterle's new hot spot includes German and Italian-influenced dishes inspired by the chef's family. Most entrees are priced in the mid 20s, with the most expensive dish — the wagyu culotte steak — clocking in at $33. Doma Na Rohu on Morton Street also serves an interesting menu of European fare, and you should have no problem getting a table here if Dieterle's restaurant is slammed. Although Doma Na Rohu does not serve pastas or uni-topped bone marrow, the menu includes a winter salad, fresh sausages, steak, braised duck, and schnitzel. Like Dieterle's menu, you'll also find dumplings, spaetzle, and pretzel bread used in some of the dishes. Most entrees are priced in the mid teens, and appetizers are under $10. Doma Na Rohu lacks the sizzle and ambition of The Marrow, but the dining room has a great, relaxed neighborhood vibe. [Photo, Photo]