First Ramp Dish of the Season Spotted at Gramercy Tavern

Share All sharing options for: First Ramp Dish of the Season Spotted at Gramercy Tavern

Ladies and gentleman, boys and girls, Ramp Mania 2013 has officially begun in New York City. The gold medal goes to Gramercy Tavern, which served a kale and radish salad with ramp dressing last night. That's a stealthy way to use the first ramps of the season. In the weeks to come, the menus of New York City will be flooded with ramp burgers, ramp martinis, ramp pizzas, ramp sliders, ramp dogs, tempura-fried ramps, chocolate-dipped ramps, ramp baos, bacon-wrapped ramps, and ramp-wrapped bacon. 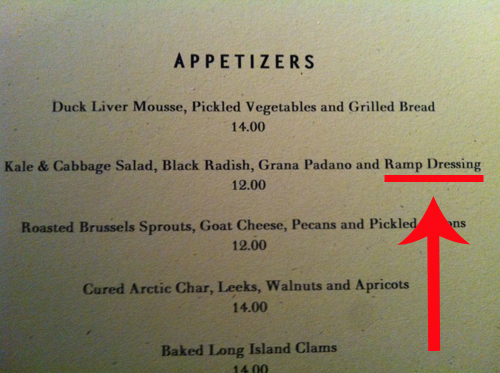 When asked about the ramps, a server explained that, yes, the kitchen got them recently. They are in very short supply right now (hence the use of them in a salad dressing). Gramercy Tavern gets most of its produce from local farms, but they also have a few suppliers based in the south, so these delicious, garlicky greens were most likely sourced from a warmer climate.

Last year, the first spring ramps hit the menu at Seersucker on March 17. So, Spring Ramp Mania has started almost exactly one month early this year. If you spot any other early-arrival ramps on the menus of NYC, please let us know.
UPDATE: Gothamist reached out to Gramercy Tavern, and apparently there was some confusion. The ramps are actually pickled ramps from last season. But at least ramps are on the menu again.
· All Coverage of Ramps [~ENY~]
· All Coverage of Gramercy Tavern [~ENY~]
[Photo: I Eat food]