Share All sharing options for: CB3 Tussles With EMM Group; The Immigrant Expands 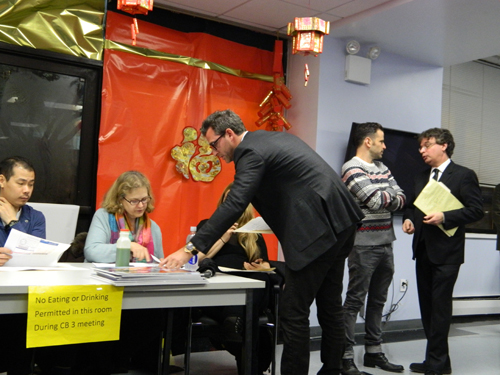 As noted earlier, members of EMM Group appeared before the board last night to try to move the primary dance space at their 199 Bowery entertainment complex. Right now, the dancing is done at Bow, a club in the basement, and the EMM people wanted to move it to Finale, which is on the ground floor. The team encountered opposition from community members, who also noted that the bakery component that EMM had promised still hadn't opened yet, though partners Eugene Remm and Mark Birnbaum insisted that it's on the way. After over two hours of deliberating, the team withdrew, pushing off the argument until March's meeting.

Restaurateur Taavo Somer appeared before the board to try and extend the bar on the ground floor of Peels by eliminating the coffee counter. Somer said adding seats to the bar makes the space "look more active in that corner," which is usually empty after 6 p.m. The restaurateur got initial approval.

Jason Corey got the go ahead to transform the grandfathered retail space at 349 East 9th Street into beercentric tavern The Immigrant Tap Room. Corey agreed to "box within a box" soundproofing of the space to appease his neighbor, who claimed she would have to "vacate [her] apartment if the bar moved in." Chip shop Eastwood will extend its offerings to beer and wine at 200 Clinton St. The dinner theater spot proposed by the owner of Piano's at 154 Ludlow was shot down, after members of the community spoke against the operators. And sake bar SakaMai at 157 Ludlow got a thumbs up for a stand up bar and full liquor license.
— Ashley Mason
· All Coverage of First Word [~ENY~]
[Photo: Ashley Mason]