And now, Levi Dalton, the accomplished sommelier behind the I'll Drink to That podcast, offers his thoughts on how the development of wine lists has changed over the last 15 years or so. 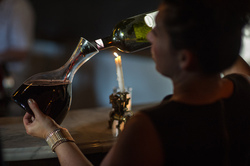 What's most notable about wine focused restaurants today is how rarely they open. The embrace of ethnic cuisines (Ma po tofu! Tacos!) sharing few historical ties with wine, the popularity surge of artisanal cocktails, the rising price of wines from classic regions, and higher rents per square foot all play a part in the shortage of newly stocked cellars. But what really seems to have left big wine lists for dead is the decline of interest in California Cult wines, which were the killer app of wine program growth across America in the second half of the 1990s and beyond. The Cult wines, propelled by lofty scores, used to fly high. They were easily understood in terms of grape (Cabernet!) and place (California!), pretty much approachable to drink on release, and crucially, not allocated to retail. Three and four star restaurants with a buying history received the wines and everybody else did not.

Not only were guests willing to pay the markups on Cult wines that fueled restaurant cellar growth, they were often delighted to have the opportunity. The excitement bred by scores was palpable, and questions from guests about wine often turned on what was available to buy. The Cult bottles could not be found on retail shelves, mailing lists were closed, and very little was flipped at auction during the first few years of their popularity. It was a great recipe for restaurants, and many sommeliers who got into the rapidly expanding wine business since then owe their experience to the market that developed around Cult wines.

Fast forward to today and the same ingredients no longer mix as well. The wines from today's most coveted regions, such as Burgundy and the Northern Rhone, enjoy a robust trade on the retail market. There is a substantial auction market for them already in place. And there is easily searchable comparison pricing information. Collectible wines now often carry high enough original price levels that a markup can lift them beyond the reach of many restaurant patrons. Restaurant operators have recently balked at tying up dollars in large inventory numbers and become wary of discouraging clientele who might want a comfortable glass of wine but not a trek through high elevation wine prices. The physical footprint of many new restaurants has also shrunk, meaning fewer seats and a smaller number of bottles sold. Wine programs have been tailored to match. New wine lists have shrunk in size, or are nearly gone altogether as restaurants opt for a cocktail or beer focus. Wine Directors and consultants who oversee multiple venues have proliferated. And loyalty may be history.

Ask any old time sales rep how the Cult brands were distributed and they will most likely tell you that allocations were based on customer loyalty. A buyer who purchased regularly from a portfolio would be rewarded with highly desirable Cult Cabernet. Those commitments were focused on glass pours. Wine by the glass choices were often made with an eye to allocation fulfillment in mind. As that incentive has diminished, so have the locked in glass pours that might stay in place for months or even years. Today there are no truly must have wines, in the sense of wines that must be on lists for them to be taken seriously, and that has brought along ramifications all throughout the industry. Salesmen relying on loyalty may have seen their phones cease to ring quite as much with reorders. An increase in the number of importers in the New York market, brought about by the increased ease of global communication, has meant more competition for placements. Rapid by the glass changes have also been pushed along by an increased focus on seasonality, and by an emphasis on wines available in scarce quantities instead of largely recognizable brands. Where old school buyers might have supported a range of distributors by offering them some space on their large lists, newer buyers without those deep lists find that they can show some support to a broad group of suppliers, regions, and styles by changing their glass pours frequently.

And they do change them frequently. Matt Stinton, the Beverage Director for Hearth as well as all of the Terroir wine bars, makes a point of changing about half of his glass pours every month and a half, and may end up in some way altering the selection in a single location over 60 times a year. Matt says that while these changes are partly informed by limited storage space and a desire to spread the wealth out among the suppliers, they are mostly about keeping the staff excited and rewarding customers "coming in because they want to find something new." A guest who once might have worked his way through a large list of selections over many visits may now find similar variety in the rotating choices of a smaller list. In fact, Matt explicitly tries not to offer the same wine by the same producer in the next vintage, or to replace one type of wine with another of the same, instead seeking out more diversity. It's a setup that can be challenging to maintain ("you are always looking for replacements," says Matt) but also helpful. Short vintages, like 2012, are less of a headache because there is little need to lock in big quantity. And the sense that something will disappear from the list encourages guests to try something now that they might not see again later.

"The limited time only kind of pour is really fun because it keeps the staff on their toes," says John Ragan, who is the Wine Director of the Union Square Hospitality Group. "It's pretty awesome when you show up for work every day and you say, 'Okay, cool, what's next? What's happening today? What's new?'" John thinks that that excitement can also carry over for guests as well: "They can come in, and there is always something new happening." Maialino is one USHG restaurant that makes glass pour rotation a priority, and John cites North End Grill as another recent opening that was designed with wine list flexibility in mind. That being said, John sees the advantages that some of the older USHG venues have developed through long term relationships with specific wineries and suppliers. If newer establishments end up missing out on those same advantages it may be because the structure of the market has pushed them in a different direction.
· All Coverage of Wine on Eater [~ENY~]