A Line Cook Remembers the Whales of La Petite Maison

Share All sharing options for: A Line Cook Remembers the Whales of La Petite Maison

As a Whale Week special, a former chef at shuttered Euro hangout La Petite Maison recalls some of the splashy diners that visited the restaurant: 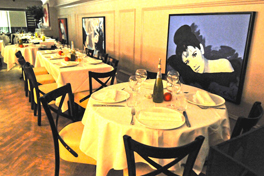 I worked in the kitchen at La Petite Maison in the city when it was still busy. We had quite a few ultra-wealthy people with various "quirks" come through on a regular basis, but two stories I will never forget.

The first involves one of the owners and his girlfriend. He came in and ordered something simple with no grand requests. She ordered a steak and salad, which wasn't on the menu as such, but was no big deal to prepare. She then sent it back because the steak wasn't sliced. It was then sliced and sent back out. It came back again because the girlfriend wanted it sliced into bite-sized portions along with the salad, the cut-up lettuce leaves turned up like little cups that would hold the individually sliced pieces of steak, and the steak placed on top of them. Basically, she didn't want to use a knife, and the fork was only for picking up what someone had already arranged for her.

The second story involves the Saudi royal family, who would come through at least once a month, as they were big fans of the restaurant in Nice. We never questioned the orders we got from their tables because we knew they would always order so much food. So what if the items were listed on the menu as "serves two"? They would take one for each person at the table. They came in as a 14-top one night and ordered something like seven Dover sole and four rack of lamb, among other things. The kitchen started making their food when another ticket came in for three more Dover sole (at north of $70 an order) and a few more lamb.

We looked at each other a bit funny and added everything to their order. A waiter came back after all of the food was already cooking to say that something got screwed up in the computer system, and the second ticket was actually a cancel instead of a fire (the waitstaff there was kept around because they were pretty to look at, not because of competency). Long story short, the kitchen didn't send out about a grand worth of stuff to the Saudis. A manger decided to leave it on the bill and see what would happen. Rather than bother with having it removed, they paid it, left, and came back two weeks later.
· All Coverage of Whale Week [~ENY~]
· All Coverage of La Petite Maison [~ENY~]
Photo]