To close out Whale Week 2013, here is the dining diary of an anonymous young man who works in the finance industry: 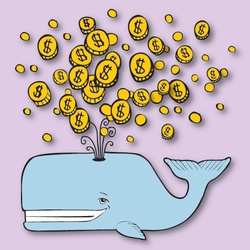 I was planning on proposing to my girlfriend in early August, and I really wanted to make the days leading up to it memorable. I started plotting in early July, around the same time our three interns joined the group. My goal was to get reservations in succession for three of the toughest tables in NYC. The interns and I loaded the restaurants' numbers to speed dial on our turrets, and I'm pretty sure as a group we dialed Brooklyn Fare 600 times. I bought them all lunch, and took them out to Fette Sau in Williamsburg for dinner and beers a week later as a thank you for nailing all the reservations I wanted.

Blanca: Thursday, August 9: To date, this is my favorite restaurant, and I've been to Per Se, EMP, Daniel, Jean Georges, and so on. I've been to Roberta's and a couple of other bars in Bushwick a few times before, so going out there wasn't as edgy as it might be for most Manhattanites. Walking through Roberta's and into Blanca's space was really awesome, as I know my girlfriend would have never expected to see a spotless, massive, stainless steel kitchen and 12 chairs with a front row view. We did the wine tasting and were there for over four hours, something close to 30 courses. It was a lot of fun and a great casual atmosphere. Girlfriend loved the pastas, I thought the meats were excellent. Carlo Mirachi opened the door for us on the way out, and we jumped into a black car.

Chef's Table at Brooklyn Fare: Friday, August 10: Jumped on the C Train and arrived for the first seating at Brooklyn fare. We sat two people away from the prep table and Cesar Ramirez. The atmosphere was much calmer, lights were dimmer, and to what I remember, the plates were very elaborate. To date, Chef's Table and Marea are tied for my girlfriend's favorite restaurant. There were multiple plates of amazing sashimi, and Cesar was very focused and quiet.

Atera: Saturday, August 11: We arrived at Atera after having a drink at my favorite bar, Weather Up in Tribeca. The restaurant looked like an old distinguished office. We again sat closest to the kitchen, and our server made us some pretty interesting cocktails. Matt Lightner was away on this day (I'd later meet him at the opening of Atera bar downstairs). Of the restaurants we'd been to, the food here was the most creative, and the experience was somewhat similar to Alinea in Chicago. I don't remember the exact plates, but I still remember being blown away by the presentations.

Southampton: Sunday, August 12: Sunday morning, we left Manhattan for Southampton, and stayed at the 1708 House, which was a pretty awesome bed and breakfast and pretty close to the main shopping area. Around sunset we made our way to Cooper's Beach, which was perfectly quiet at the time. I hired a photographer to snap pictures of the proposal and we ended up with some really nice shots of the waves crashing and the sun setting! She said yes of course. After that we went to RedBar Brasserie to celebrate.

The NoMad Rooftop: Monday, August 13: The next morning before the ride back, I scored tickets to The NoMad Rooftop. We had some pretty primo seats with the Empire State Building behind us. They also brought out some Champagne and toasted our engagement. We had a tasting menu, which was very vegetable-centric, along with a tomato soda. It was a great time, and pretty awesome to see the sun set on Midtown.
· All Coverage of Whale Week [~ENY~]