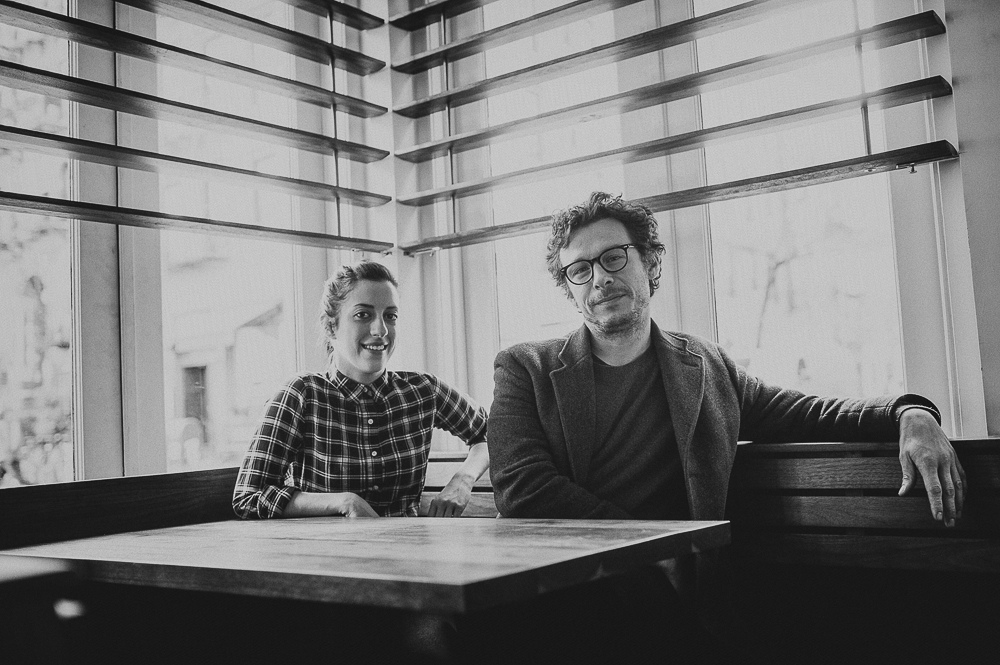 Just over a year ago, West Village empire builder Gabe Stulman and executive chef/partner Mehdi Brunet-Benkritly opened Chez Sardine, a 30-seat "inauthentic" Japanese izakaya, serving everything from hand rolls to foie gras grilled cheese. Danielle Stulman, the manager of Fedora and Gabe's sister, was tapped to be the GM of this tiny hot spot, and she was recently promoted to run the front of the house at Fedora as well.

Twelve months later, Gabe calls Brunet-Benkritly and Danielle the "heart and soul" of the restaurant. They have an easy rapport, alternately laughing at each other's jokes and praising each other's work. On a recent afternoon, Brunet-Benkritly and Danielle talked with Eater NY about salmon heads, small spaces and splitting their time between the restaurants in the neighborhood.

Do you guys remember the opening night?
Danielle Stulman: Yeah, it was right after Thanksgiving. Mehdi Brunet-Benkritly: I guess I remember being in the complete weeds. It's a restaurant that has a very different system than…anything I've ever done. It's less traditional. DS: It's not your typical appetizer, entrée…parade. And understanding that on night one (and for the first three or four months)…it took a while to be like, this is how it's going to be.

When did the idea for Chez Sardine start percolating?
MBB: I had a restaurant concept I was thinking about for a few years, even before I came [to New York]. And then I met Gabriel…. When we started understanding Fedora a little more, I started talking with him about the idea. It was different than what it became. [The idea was for] a much smaller space. I was seeing it tiny, tiny and it was mostly a bar. I shouldn't give away my idea now, because it's not even done. It was not going to be very sushi-oriented, actually. Because I had no experience with that. When we decided to take that space, the idea changed a lot, because it was a lot bigger. Gabe flat-out told me, "We can do whatever we want. We can still make that restaurant if you want." So it became that, and then we decided to put a sushi bar in because, aesthetically, it looks amazing and it's fun and it just seemed like it was fitting. So we decided to do a little bit of sushi. And then a lot of things started changing.

Were you always planning to add brunch?
DS: That corner is so beautiful, it's a space that should be open during the day. I get to work there all day, and I think I work in the most beautiful office in all of New York City. The fact we can do that two days a week is really awesome. MBB: It's a beautiful room. We knew we were going to do brunch from the start. DS: We waited a couple months to get on our feet, but it was always part of the plan.

How do you split your time between the two places?
MBB: I'm still the chef at Fedora, and the fact that they're next to each other, that helps. Now, it's normal. I do two days in each. I do the job of my chefs, on their day off. DS: You're in the kitchen. MBB: I'm always at both places. When I'm at Sardine, I jump in to do a menu change at Fedora. So, tomorrow, we have a menu change at Sardine, but I'm actually at Fedora. DS: I just started getting into my schedule, and it feels like…I'm where on what day? Even though it's my day at Sardine, I might have a meeting with someone at Fedora.

What has the neighborhood reaction been like?
DS:: I'd say really positive. I don't know what it's been like to open any of the other restaurants, but I feel like from working at Fedora for a while, I really started to see regulars there and meet them. And then all of a sudden, they become your friends, and you feel like you're having a fun time at work, with all these people you know. When I jumped to Sardine, I thought, well, those regulars are just Fedora's. But it's funny how they start to all come together. There are a lot of people who already love your restaurants, and then you get a lot of new people who are just for you that have their favorites amongst your restaurants. It's exciting.

Are there any big changes planned? Lunch or another location, maybe?
DS: I don't want there to be another Chez Sardine. MBB (joking): Well, there's the one in Dubai opening next month, and then one in Kolkata the year after that. DS (laughing): Oh, I forgot about that. MBB: I don't think we're going to open for lunch. We're never closed to any opportunities, but…. We're starting to see our biggest brunches. DS: Last Saturday was a huge brunch for us. MBB:
It was tough to get prepped for the next service, because the space is so tiny. If we start doing those numbers every week, well, we'll learn and we'll work a little differently. DS: I think that's always been our system, though: see what works and then make changes and try new things and take suggestions and listen to other people talk to each other about it. That's always helped us grow and, hopefully, get better with each passing day. 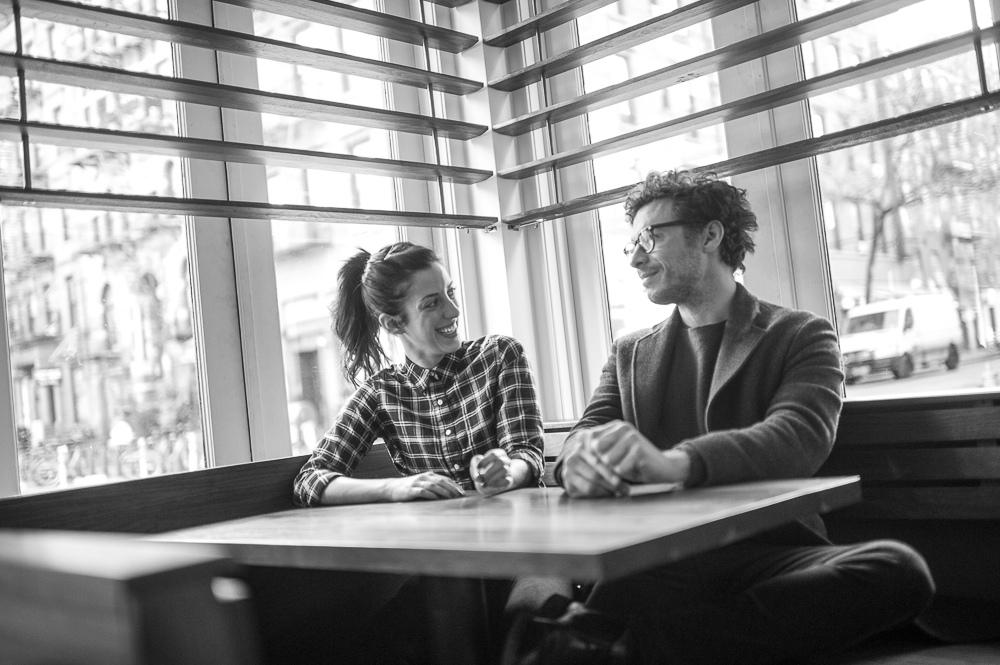 So, Danielle, do you and Gabe work well together?
DS: It was definitely an adjustment from Fedora. I'm in charge of a lot, and that's huge. I've said this from day one and I'll say it until the last day, is that alongside Gina (his wife, my sister-in-law), I am so invested in seeing him do well. I know it's because he's my brother; I've known him for 30 years. So, I'm going to work my ass off for the restaurant, because I believe in it and my heart is there. He's my blood. But working with him has had its challenges. I'm always going to know him as my brother, but he's also my boss. Overall, he's an extremely brilliant guy and he knows what he's doing and I'm really, really fortunate to be working with him.

What did you think about the professional reviews?
MBB: The first review was pretty amazing, from New York magazine. Let's be real, Adam Platt would never have given us four stars, but we got a glowing four stars [from Underground Gourmet]. So that was great. Time Out was good. We like Jay Cheshes, he likes us. He gave an amazing review to Fedora a few years ago. And then, the New York Times. I don't think we're for him, and I think it becomes that at some point. Pete Wells didn't appreciate the things that excite us.

I like to think I'm a pretty delicate cook, and I love vegetables and I love fresh things. When you know you did what you do, and someone decides not to like it, I'm fine with that. It's the New York Times, so you want to get better than one star. … But it's very much in the past.

Do you think there's anything on the menu that's underrated?
MBB: They sell very evenly. Of course, we want to celebrate the head every day, because it [the miso-maple salmon head] is a different dish. We've put it in the middle in a circle on the menu since day one. I never thought we would serve so many. We serve between 12 and 20 a night. (I'm slightly exaggerating, but those were the numbers at some point. Right now, we serve an average of 12 a night.) So that's pretty cool. We're not changing the world. Great ideas come every now and then. I think there's lots of people with amazing ideas. What we do is very simple…but things like that are fun. DS: When I think salmon head, I think Mehdi, I think fun. MBB: That's what Pete Wells does not like. It's fun, but it's also a serious little place. DS: We take our service very seriously.
· All Coverage of Chez Sardine [~ENY~]
· All Coverage of One Year In [~ENY~]