Sietsema's Quest for Cuy in Queens

Share All sharing options for: Sietsema's Quest for Cuy in Queens

Most who frequent the city's South American eateries have heard of cuy. It's a small rodent that belongs to the genus of animals known as cavies. It has two rows of sharp teeth inside its mouth, and two sets of fore-fangs, something like a beaver. The fur is brown to gray and very bushy, and the average specimen is about six to eight inches in length. The head is small, the eyes are beady. If you wandered into a pet shop stateside, you'd find it in a cage marked guinea pig. In Ecuador, Brazil, and Peru it's a dietary staple, stewed, spit-roasted, or deep fried, most often eaten on special occasions. Dad always gets the head.

I first ate cuy in the early '90s at an Ecuadorian restaurant in Sunset Park, now long shuttered. When the thing was brought to the table, it was standing in a bed of pebbly potatoes and mote, the slaked corn kernels here called hominy, and in Mexico, pozole. Sleek and brown, fur removed but crackly skin intact, it looked like a bronze sculpture of a hunting animal trying to catch a scent. Later in the decade, I ate the rodent again in the northern highlands of Ecuador.

In the ensuing years, cuy has not become easier to get in the city. It takes some digging. Even now, it may not be strictly legal. As part of the research for a book, I ate cuy again last night in the company of two friends somewhere in Queens. Getting the thing took days of negotiation on the part of another pal who speaks idiomatic Andean Spanish, and can be very persuasive over the phone. A price was agreed upon, with the owner requiring a minimum of two. A deposit was demanded ahead of time in cash, but we demurred due to the great distance. We got the cuys anyway, after a long walk from the subway. 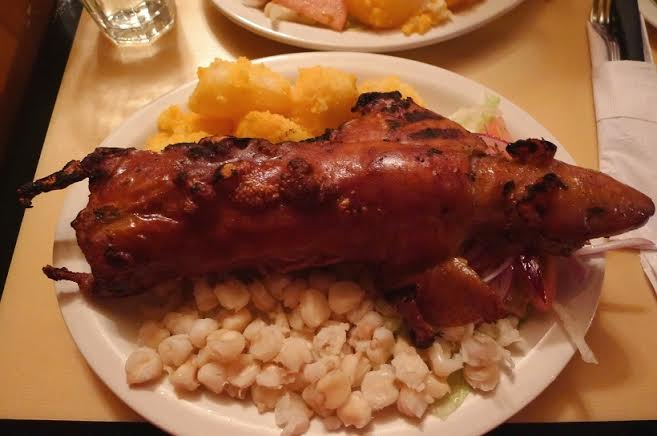 The animals came distributed on three plates lined with salad, mote, and potatoes that appeared to be drenched in margarine. Very yellow. My friends each got half a cuy; I was honored with a whole specimen due to my status as the oldest male at the table. Actually, I was the only male at the table. As with the cuy in Sunset Park nearly two decades ago, mine was served splayed, but it still appeared to be standing on all fours.

Yes, it was somewhat gruesome, but also somewhat tasty. Devoid of its fur, the animal is not as corpulent as you might have imagined. It didn't taste like chicken, it was more like a game hen, with dark and stringy flesh. The burnished skin was the real prize, seemingly acres of it, and it had been massaged with garlic and coarse salt prior to roasting and was crisp as a potato chip. Washed down with Coronas, the guinea pigs were a treat. But not one I'd repeat more often than every couple of decades or so.
· All Posts by Sietsema [~ENY~]