1) Fort Greene: Hungry Ghost opened its third Brooklyn outpost on Fulton Street last week. Located in a space that formerly housed a tire shop, the cafe has a handful of tables and a long counter. The menu is the same as the one served at the original Prospect Heights location, with sandwiches and panini, like curried chicken salad, and ham and Swiss with sauerkraut. Hungry Ghost also serves a range of house-baked goods and coffee drinks. According to Brownstowner, it plans to start hosting events like a comedy night. Status: Certified Open. 781 Fulton St., no phone. 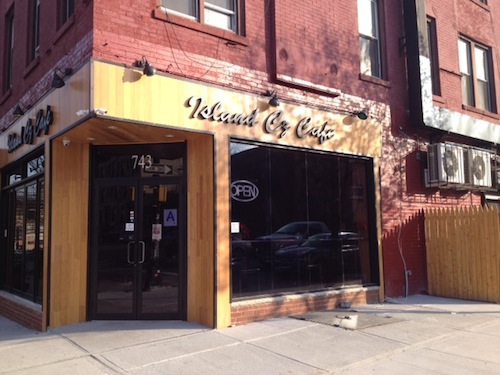 3) Hell's Kitchen: The team behind Snack Taverna has opened Snack EOS on Ninth Avenue. The restaurant is open for breakfast, lunch, and dinner, with a menu that strays from Taverna's, with more updated versions of traditional Greek dishes. There are quite a few dips, skewers, and other meze, like grilled oysters, and tomato htipiti with smoked mackerel, plus entrees like pork souvlaki, and angel hair pasta with whelks, fennel pesto, and bottarga. Some of the cocktails are made with Greek liquors like ouzo and sambuca, and the wine list includes many Greek and Mediterranean bottles. Status: Certified Open. 522 9th Ave., 646-964-4964.

4) Midtown: The now mostly-defunct mini chain Pop Burger (all original locations have closed, leaving only the Pop Pub spinoff on University Place) has teamed up with the Pod Hotel to open Pop @ Pod. The beer and burger bar has some old Pop dishes and some new ones, plus a range of craft beers and beer cocktails. There are also vintage foosball tables to play with, and every booth has its own flat screen TV. Status: Certified Open. 230 E. 51st St., 212-355-0300.

5) Alphabet City: A new Basque pintxos bar called Donostia has opened on Tompkins Square Park. The menu includes a long list of the little sandwiches known as montaditos, with fillings like a the classic tortilla espanola or razor clams and white bean puree. There are also various cured fish, meats, cheeses and other traditional tapas, plus a small breakfast menu. Status: Certified Open. 155 Avenue B, 646-256-9773.

6) Bushwick: Russian-influenced cafe Dillinger's opened a couple of weeks ago, Bedford + Bowery reports. It's open from 7 a.m. to 7 p.m., with things like a croissant with smoked gouda and pumpkin butter for breakfast, and Russian-style hot dogs on pretzel buns for the rest of the day. The team plans to expand the menu in the coming weeks, and hopes to get a liquor license soon. Status: Certified Open. 146 Evergreen Ave., 347-260-2123.