Share All sharing options for: Friends of Eater Offer Headline Predictions for 2014

As is the tradition at Eater, our closeout of the year is a survey of friends, industry types, and bloggers. We've already covered best standbys, top newcomers, biggest dining surprises, best meals, and break-ups. Now, headline predictions for 2014. 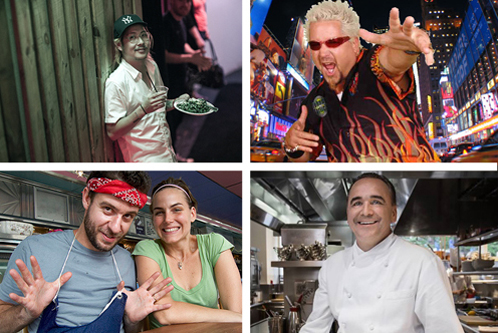 Q: What Are Your Headline Predictions for 2014?
Kat Kinsman, Eatocracy managing editor:
· Fieri to Open Multi-Level Party Barn Adjacent to Barclays Center
· Wells Awards Three Stars to New Missy Robbins-Helmed Restaurant (I have no idea what she's actually doing next, but I can dream)
· Year of the Female Chef

*Impatiently waiting for John Fraser's vegetable place; for Ivan Ramen to open downtown and for Mission Chinese to re-open.

*And in the random department – biscuits and bagels in 2014.

Danyelle Freeman, Restaurant Girl: Uni is going to be huge. It's already creeping onto menus all over the city, and not just at Japanese joints. There's an uni & lobster Risotto at Marea, another uni risotto at Bar Masa, and Kingside's got a tuna crudo with uni vinaigrette, to name just a few uni-inspired dishes I've spotted around town lately. I also think 2014 will be the year of the rabbit… on every menu. And we'll see more uber local sourcing, everything from arugula & tomatoes grown in restaurant gardens to honey made on a neighboring rooftop and cheese made just down the street.

Levi Dalton, Eater wine editor: Sommelier slices off multiple fingers in freak sabering accident: he thinks two are still unaccounted for, but is having trouble counting.

Robert Sietsema, Eater contributing editor: Many sit-down restaurants have simply become too expensive for average people to eat in them very often; there will be lots of new dining "concepts" on the horizon, and more eat-and-run and carryout places flaunting invented kinds of food in cross-cultural categories. There will be even more food courts, where mini-versions of restaurants basically pool the costs.

Jay Pascual, The Food Doc: With young culinary talent finding it difficult to gain support here in the city, especially as investors hedge their bets and fund the big stars and known quantities, I fear a culinary "Brain Drain" is imminent for New York.

Marguerite Preston, Eater NY associate editor: LIC is the new Greenpoint. Rotisserie chickens and high-end food courts are all the rage. Deviled eggs-only single dish restaurant fails to live up to the hype.

Michael Kaminer, Daily News critic: The two biggest restaurant openings in my own neighborhood have been TGIFriday's and IHOP. With that in mind, I predict Denny's will cause a frenzy when it finally opens in Manhattan.