The end of the 20th century saw a craze for Belgian fries that resulted in at least 10 places opening up in various Manhattan neighborhoods peddling French fries and little else. The only place to survive from that era is the East Village's Pommes Frites, founded in 1997 and at one time boasting three branches. But an upstart on MacDougal in Greenwich Village, La Frite, has decided to unearth the hoary formula, and give it another spin. We decided to pit the two downtown fry specialists against each other to see which one reigns supreme.

La Frite (99 MacDougal Street, 917-388-2541) occupies a diminutive walk-up space with a nice view of a block of MacDougal that hosts over 20 restaurants — mainly fast-food establishments. Not too many incarnations ago, this storefront was an Anglo-Indian fried Oreo, Twinkie, and pickle place called Chipsy, which offered masala fries as a sideline. They were very good. La Frite describes itself as a "French Fry Joint," without specifying any particular style of French fries. 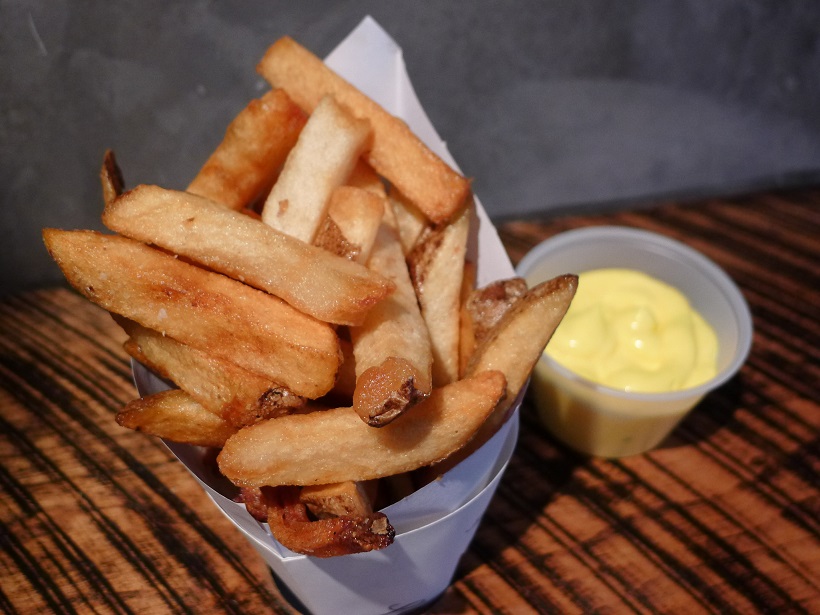 The only product offered are potato-based French fries (no sweet potato fries here), twice cooked in the Belgian manner and offered in a paper cone. The interior features a single table and a couple of stand-up dining counters, all with holes drilled in the wood surfaces to place your cone while dining. A limited roster of free toppings are provided, along with a dozen sauces priced at $1.50 each, including a mild garlic aioli, BBQ ketchup, and Dijon mustard — it might occur to you that they're really not knocking themselves out as far as toppings go. 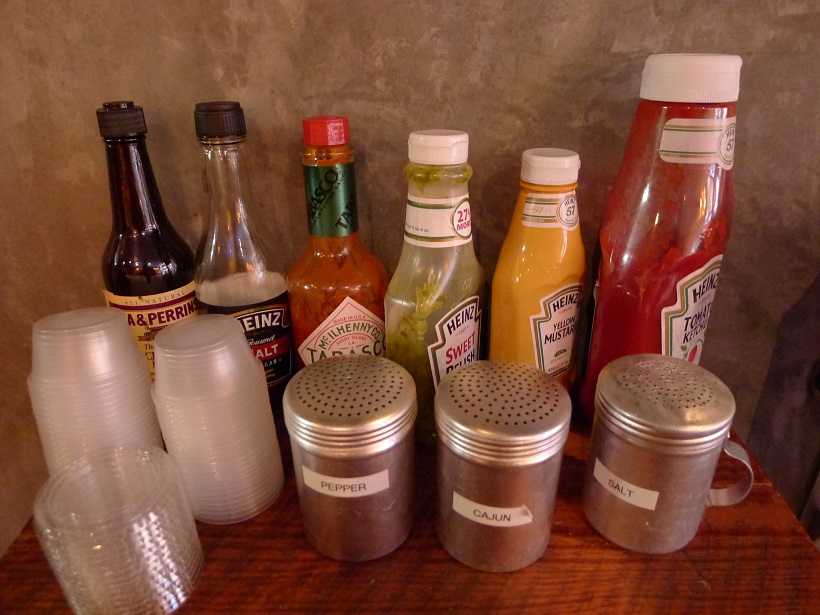 The potatoes, in stubby 3/8th inch thick sticks, are slightly on the mealy side, but perfectly fried, with little swatches of skin adhering. Toppings, either free or paid for, are deposited in little plastic containers rather than dumped on top of the fries. Fries are cooked to order and delivered hot. 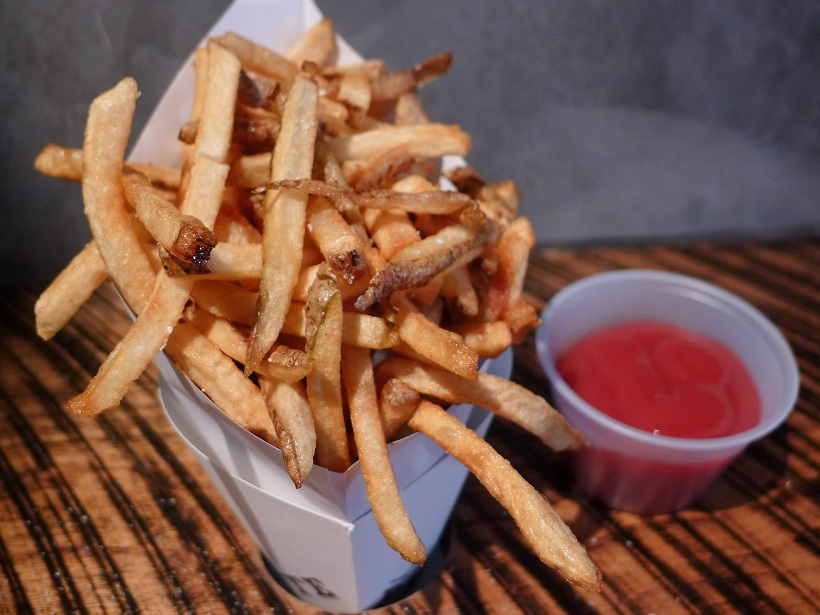 A second option is available: The same potatoes in shoestring form, about the same length and circumference as McDonald's, only 10 times better, a shape and size more suited to this type of low-moisture potato. Indeed, the skinny fries at La Frite are the better than what you usually get in bistros. Price: $4.50 regular size, $7.50 double. Note: Open till 1 a.m. weekdays, 4 a.m. weekends. 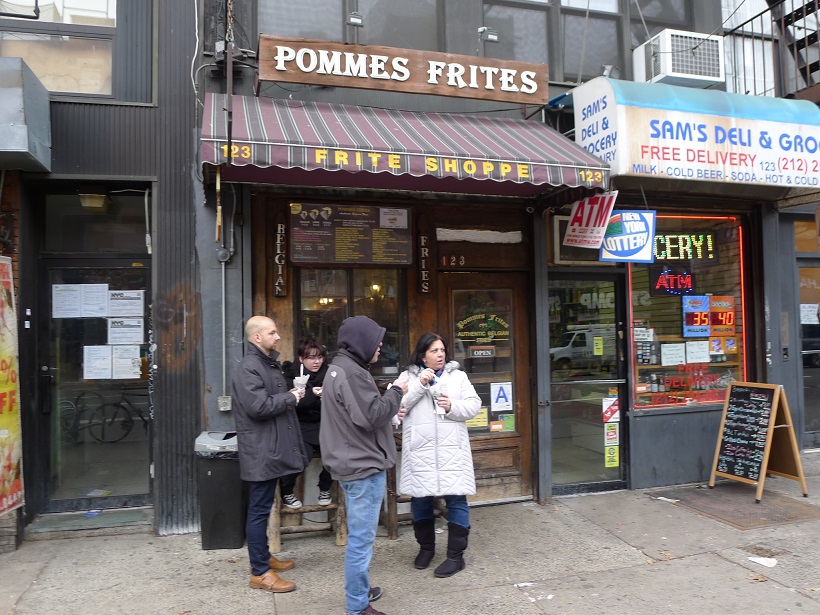 Pommes Frites (123 2nd Ave, 212-674-1234) has ruled the city's French fry scene for 16 years, catering far into the night to partygoers, second-shift workers, stoners, and other grease-inclined denizens of the night. The crazy Tudor-style interior is invariably mobbed around 10 p.m., and even in winter weather a line forms outside the take-out window. Moreover, the place has perfected the art of French fry toppings, offering at least three dozen choices spanning many international cuisines. Included are many memorable topping combinations, such as my favorite, the "especial": ketchup, Dutch frites sauce, and raw onions, gobbed on with a free hand without extra charge. 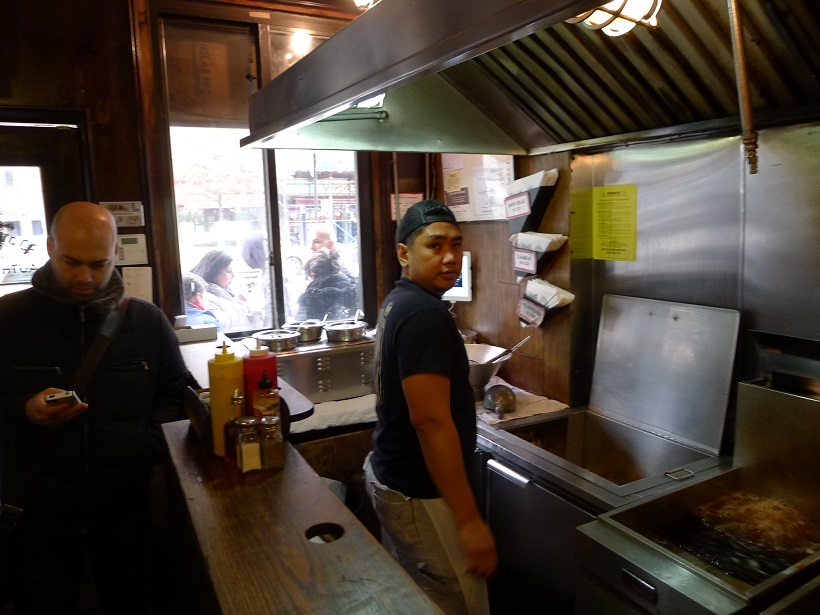 That said, the frying method when I tried them yesterday had rendered the fries a little dry, and a bit browner than they might have been. Still, excellent flavor and potatoes that had just the right grain and interior texture. I can remember previous batches over the years that glistened slightly with grease, a byproduct of the two-temperature fryings that the potatoes had undergone. 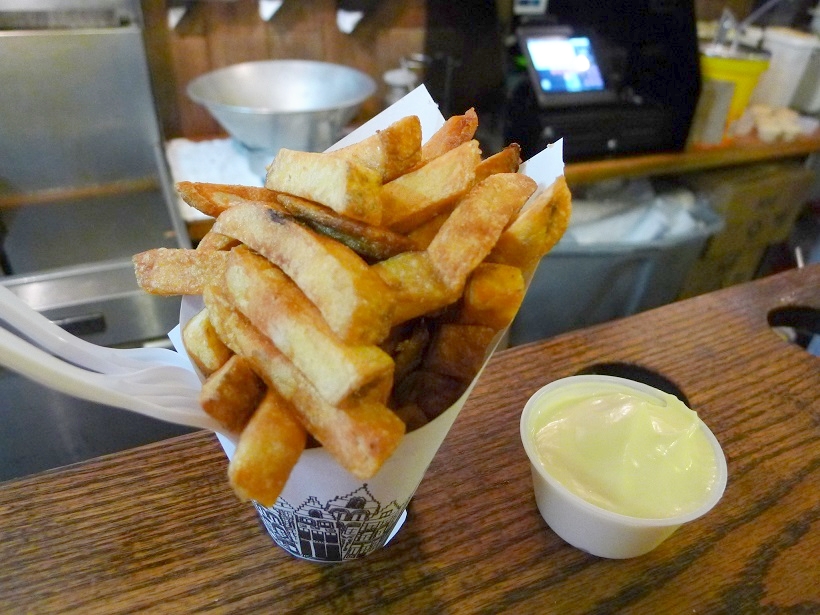 The grease glisten is a desirable feature, and the batch I tasted didn't have that signature greasiness. Still, who am I to complain? The fries were damn good anyway. And the quantity you get at the price is about 30 percent more that in the same-priced serving at La Frite. Price: $4.50 regular, $6.25 large.