Share All sharing options for: Sietsema's 15 Favorite Dishes of 2013

I eat good food all the time, so selecting the things that most impressed me was difficult. Certainly, novelty is an important factor, and so is perfect execution and attractive plating. Here are things that I ate last year that are so good, I would walk barefoot through the snow to get them. Keep your eyes peeled tomorrow for my 15 Worst Dishes of 2013.

In no particular order: 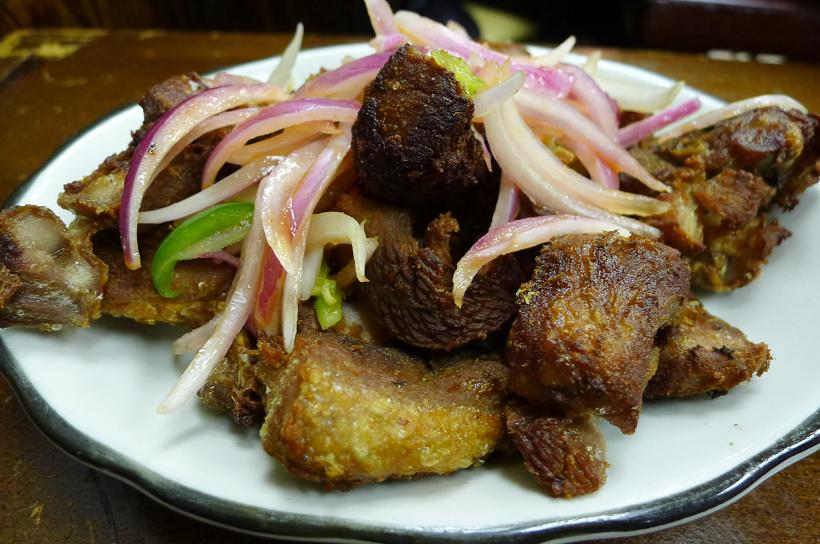 Pork Griot at Cathedral Cuisine — Griot is one of the highest attainments of Haitian cuisine, a confit of fatty pork chunks first marinated in shallots and sour orange before being fried in rendered lard. Sounds good? It most emphatically is, served with pickled purple onions. The chewy texture and concentrated porky flavor is sublime. 3402 Church Ave, Brooklyn, 718-483-8266. 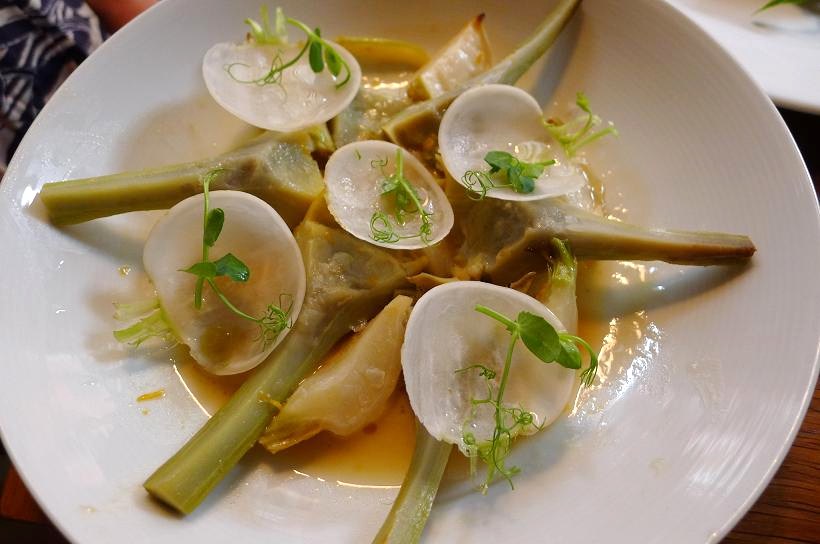 Artichokes Barigoule at Café Cluny — Veteran of Jimmy's 43 and the late, lamented Vandaag (though what am I complaining about? Mighty Quinn's took its place), chef Philip Kirschen-Clark landed at low-key Café Cluny in the West Village early in the year, and immediately began whipping up unspeakably colorful and tasty vegetarian wonders, such as this spiky collection of artichokes in Meyer lemon and white miso, decorated with raw and cooked turnips. 284 W 12th St, 212-255-6900. 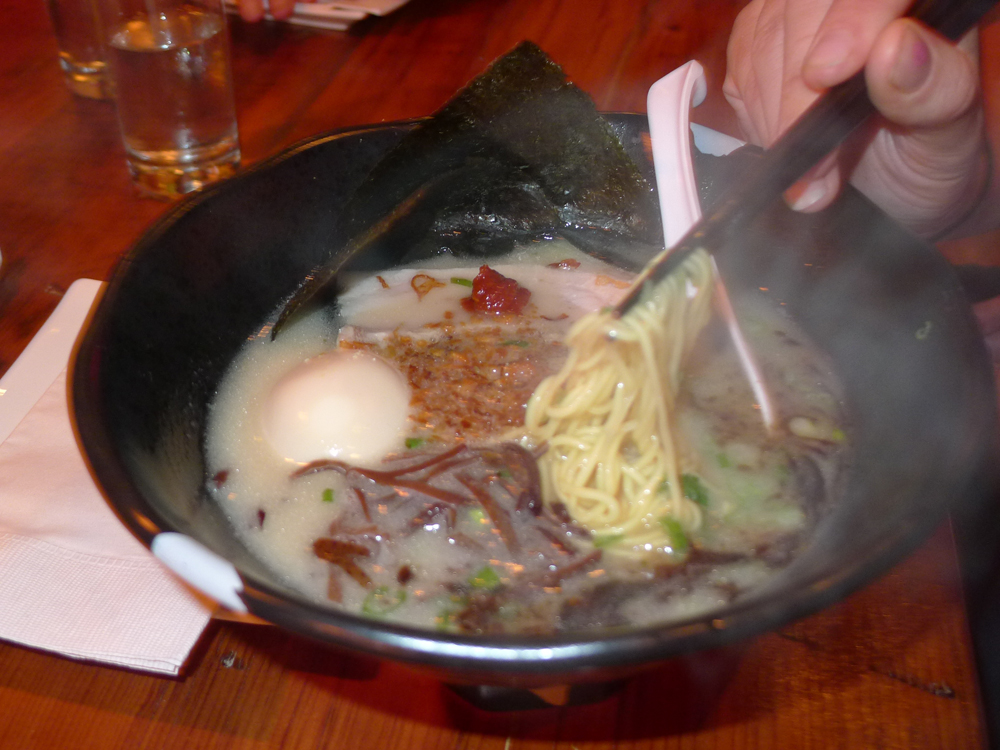 Tonkotsu Black at Jinya Ramen — So much good ramen in the city! But this was my favorite, via an ambitious L.A. noodle chain that set down like an alien spaceship on Greenwich Avenue. The opaque hybrid broth is redolent of pig foot and black garlic oil, muy savory, and the noodlery offers inexpensive customizing add-ins such as the dab of plum pickle shown in the photo. 24 Greenwich Ave, 646-329-6856. 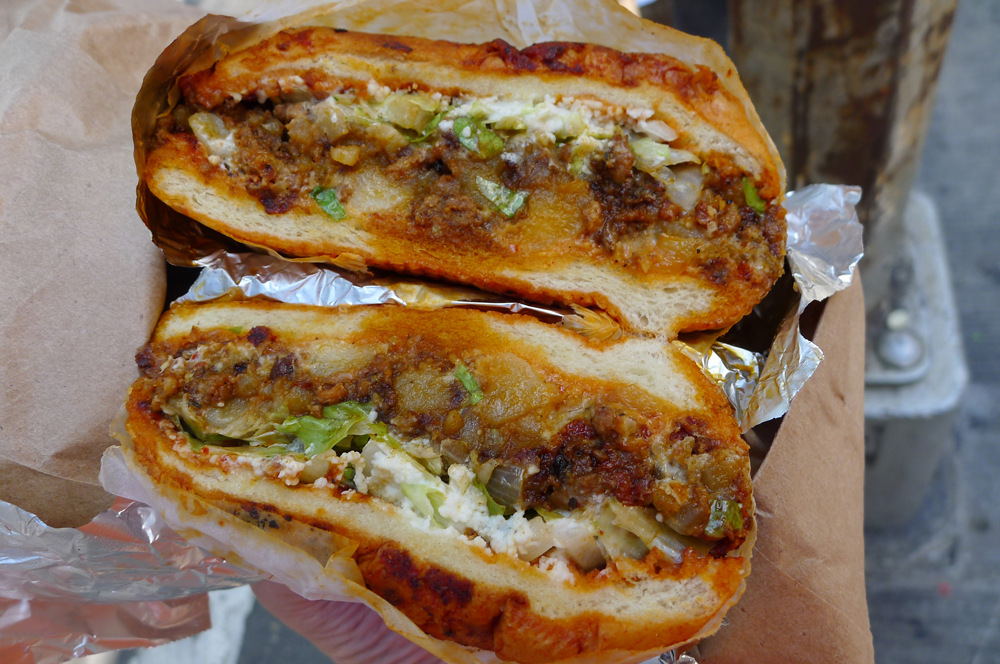 Pambazo at La Mesita — Who doesn't love the sandwiches of Mexico? Including the elongated torta and the bulbous cemita. But this rarer contraption comes dipped in red chile sauce, making a gigantic mess. Need I say it's also ultra tasty? Shown here is the chorizo and potato rendition, at this rather obscure (and so far, mainly under-patronized) new spot under the M tracks in Bushwick. 1513 Myrtle Ave, Brooklyn, 718-366-8700. 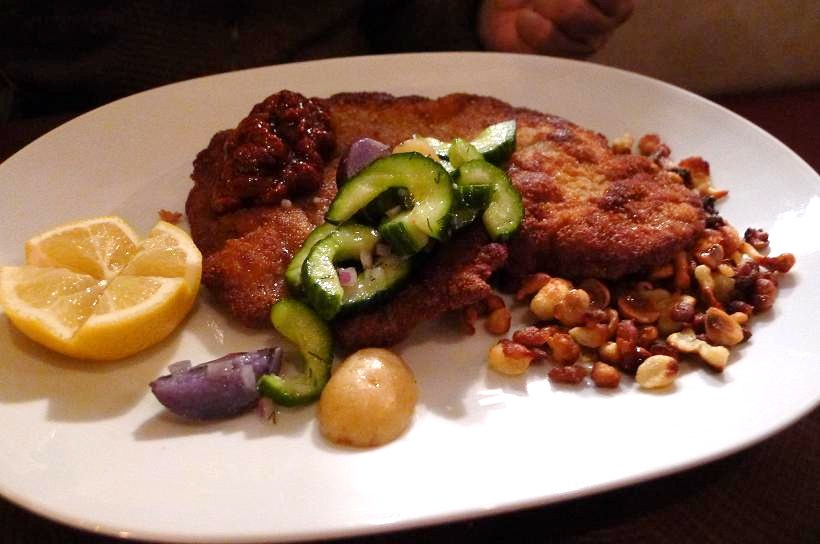 Duck Schnitzel at The Marrow — A fried schnitzel done to perfect brownness is a thing of beauty, whether it be pork, veal, chicken or — as they do in northern Italy — horse or donkey. Here Harold Dieterle in his third, organ-themed outing, does the formula one better with rich, dark duck. And the sides (cucumber-potato salad, quark-cheese spaetzle toasted to crunchiness, and stewed wolfberries) couldn't be better. 99 Bank St, 212-428-6000. 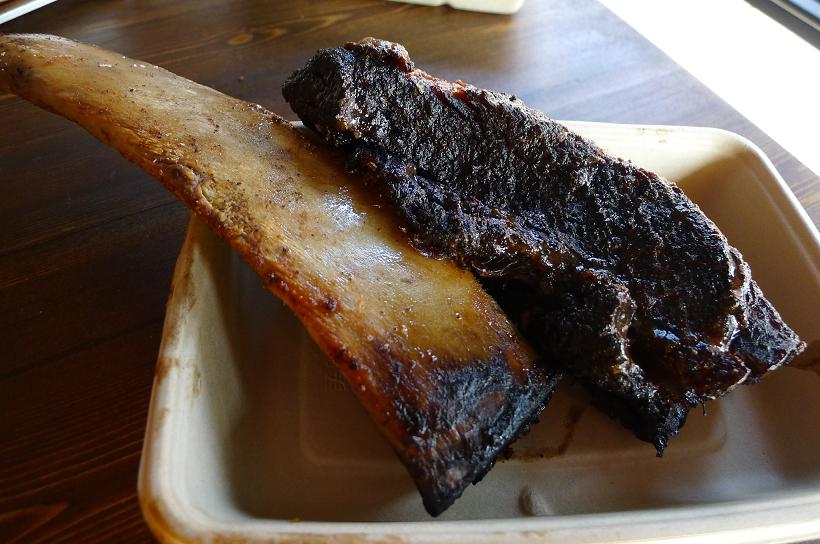 Dinosaur Rib at Mighty Quinn's — No it's not really a dinosaur rib, but it did come from a big, big steer, and the rib represents a type of 'cue currently faddish in Texas. Big enough to be shared by two, the meat and fat pull away in long smoky tendrils, and when you've finally finished every morsel — you get a giant bone as a souvenir! 103 2nd Ave, 212-677-3733. 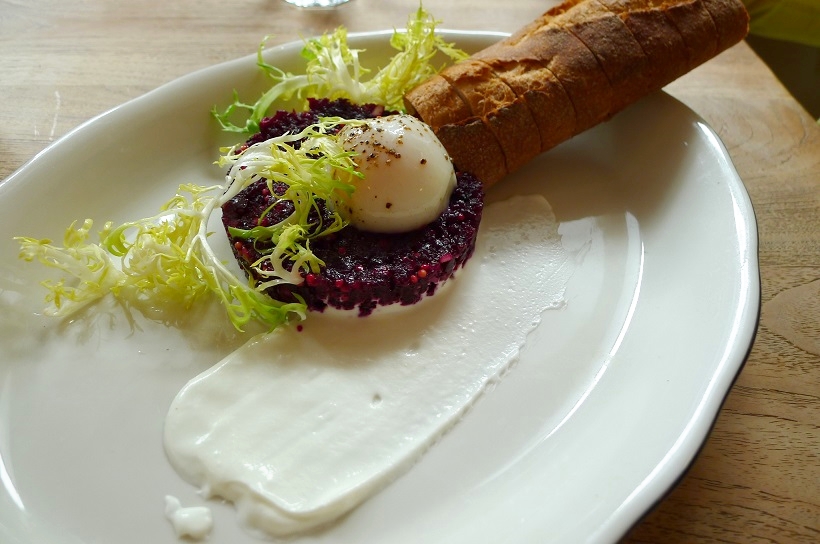 Beet Tartare at M. Wells Dinette — Normally, when you hear about beet tartare, you start thinking, I wish it were beef tartare. Not in this case. Every part of the platter – which could be hung by tenterhooks on the wall as art – bursts with flavor. This second iteration of the tiny M. Wells empire, located in MOMA's P.S. 1 and open only till 6 p.m. each day, has raised the bar for museum dining at least three notches. 22-25 Jackson Ave, Queens, 718-786-1800. 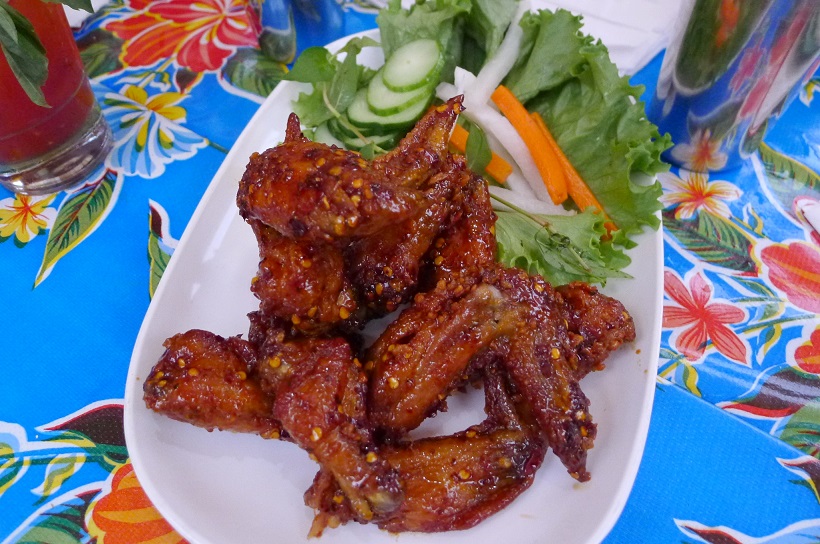 Ike's Vietnamese Fish Sauce Wings at Pok Pok Ny — It was a toss-up for which dish from this sterling venue to include, and these wings barely aced out the pork jowl served with iced mustard greens, which are actually more picturesque. But — salty, greasy, gooey, fishy, and so flavorful hand trembles as you eat them — the wings won. Order them extra spicy. 117 Columbia St, Brooklyn, 718-923-9322. 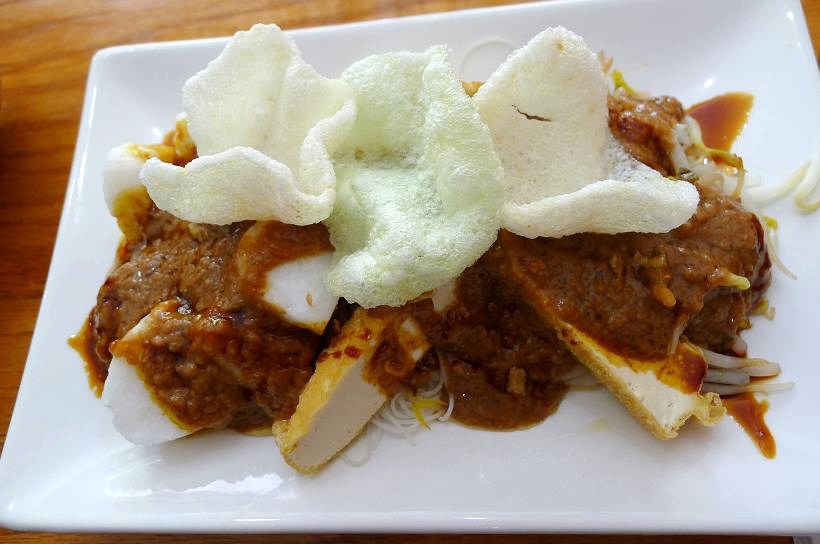 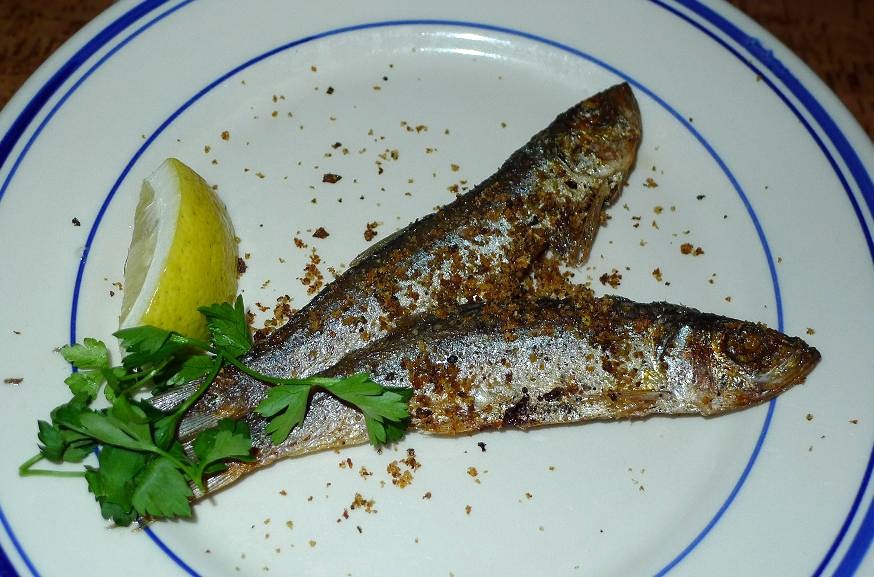 Sardines at Porsena — Simply sautéed and smothered in toasted breadcrumbs, nothing could be better than these local sardines that were part of an Abruzzi-themed Monday night dinner at Sara Jenkins' Porsena. And sustainable, too! 21 E 7th St, 212-228-4923. 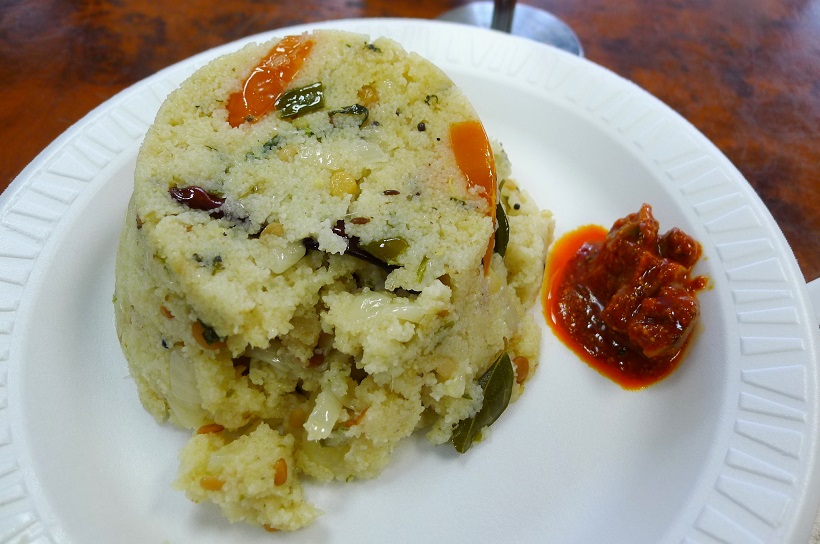 Uppma at Sri Ganesh's Dosa House — You've been eating cream of wheat with just milk and brown sugar all your life? Try it in the southern Indian manner, riddled with spices and aromatics, formed into a stunted cone, and served with a dab of acerbic pickle. This is the brunch stuff sweet Saturday night dreams are made of. 809 Newark Avenue, Jersey City, 201-222-3883. 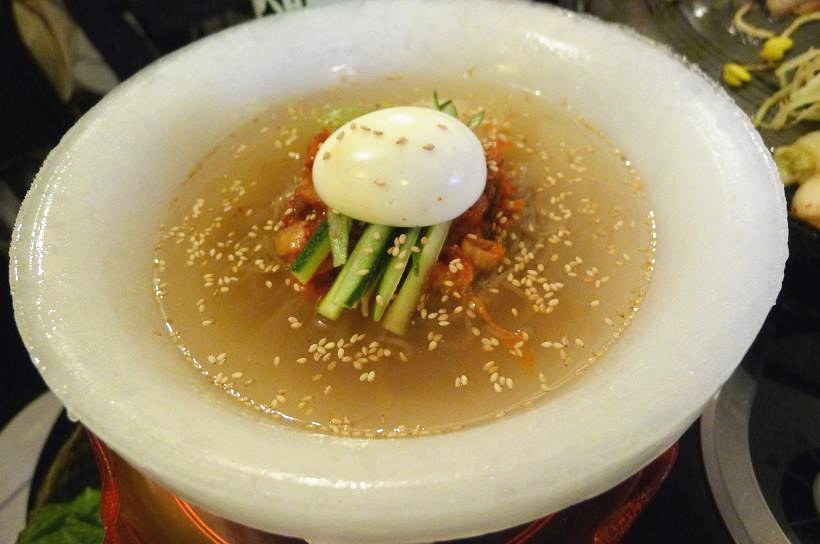 Naengmyun at Tong Sam Gyup Goo Yi — What could be more perfect on a hot summer's day than a serving of slippery Korean buckwheat noodles in a light refreshing broth served in a bowl of ice to keep them cold? Celebrity chefs could take a clue from this modest Murray Hill, Flushing establishment. And no dishes to wash! 162-23 Depot Road, Queens, 877-933-3392. 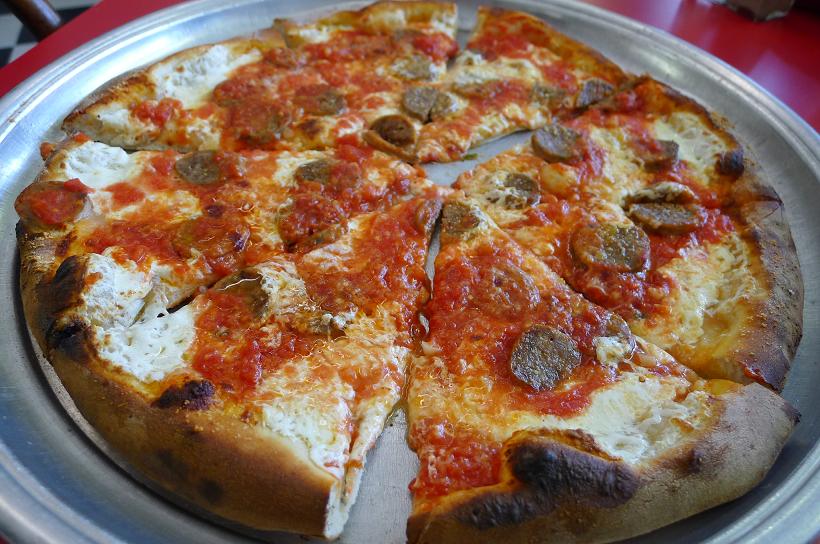 Italian Sausage Pizza at Totonno's — Yes, Totonno's is the greatest pizza parlor on earth, and also one of the first. Topped with unimpeachable and somewhat plain Italian sausage and with great mozzarella, which anneals to the tomatoey surface of the in the 900 degree coal-burning-oven pie, there's no better slice this side of Mars. 1524 Neptune Ave, Brooklyn, 718-372-8606. 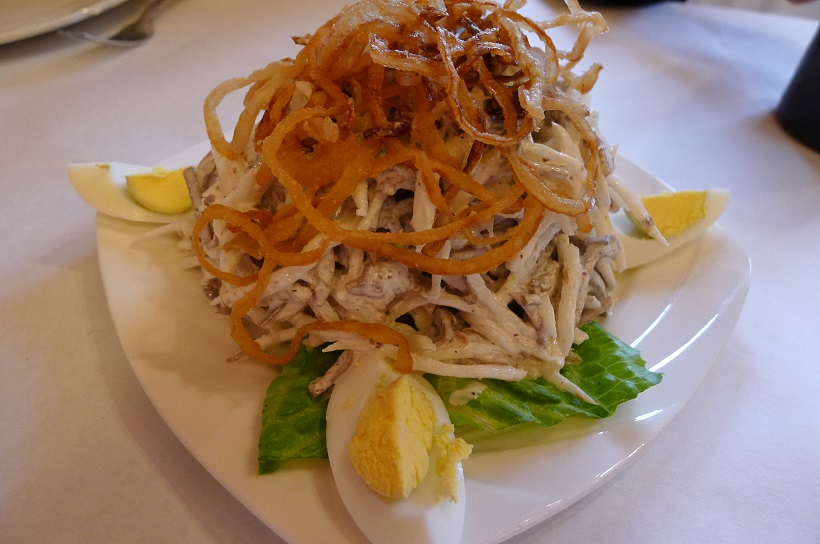 Tashkent Salad at #1 Uzbek Palace — Reading the description, I probably never would have been interested, but one bite and I fell love with this salad of intertwined tendrils of daikon and lamb in a thick mayo, surmounted by frizzled onions and surrounded by boiled eggs, as if the Silk Road ran through France. 1985 Coney Island Ave, Brooklyn, 718-676-2020. 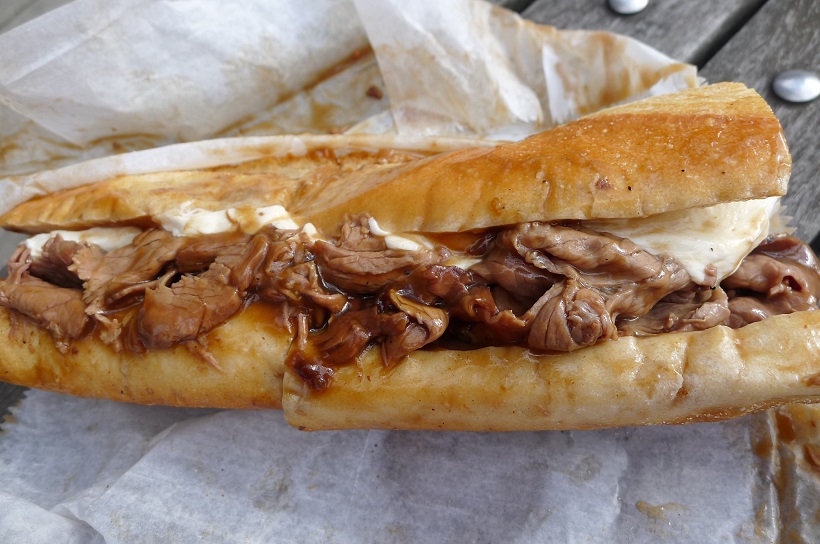 Hot Roast Beef Mozzarella Hero at Vito's Deli — Any Italian-American hero made in Hoboken with roast beef, fresh muzz, and brown gravy has got to be good, but this rendition, with a little less cheese and a little more medium-rare meat, and a gravy sloppy as a teetering Yuletide Santa, stole the cake this year. 806 Washington St, Hoboken, 201-792-4944.