Share All sharing options for: Nicola Kotsoni & Frank Minieri on 30 Years of Cantinori

One of New York's first Tuscan restaurants, Il Cantinori remains a popular hangout for celebrities, downtown artists, and the Village's old guard. The menu hasn't changed much over the last three decades, and neither has the spirit of the dining room. In the interview below, owners Frank Minieri and Nicola Kotsoni look back on 30 years in the restaurant business, and contemplate why their restaurant has flourished when so many other great restaurants in this city have failed:

What was this neighborhood like in 1983?
Nicola Kotsoni, owner: It was very, very different. I remember when we opened there were a lot of cars that were broken into.

Frank Minieri, owner: It was a little more sketchy. Eighth Street was not as hip as it is today. Washington Square Park, before it was cleaned up...it was a lot different. Drugs were rampant, and everyone can fill in the rest of the blanks. But we persevered. We were sort of like the diamond in the rough.

Nicola: We started out very busy the night that we opened, and then a week later, we got kind of slow. Then, on Christmas Eve, we had a two star review that was fantastic. Then it was so crazy — the following January, February, March — it was insane.

As one of the first Tuscan restaurant in New York, did you have to sell the cuisine, or were people receptive to it?
Nicola: We were the second Tuscan restaurant in New York. Da Silvano was the first, and we were second. I had predicted that people would want to eat Tuscan food for its simplicity. It's just genuine food — natural. And also, it's food that is not prepped a lot. Food comes in, and we sell it that same day. We had predicted right, because, obviously, for the last 30 years people have been wanting to eat this type of cuisine.

Was it a challenge back then to get all the good product?
Frank: There were just a few people that sold all those products. Now you can buy them in your local grocery store. You can go to Gristedes and they have burrata cheese and Bufala mozzarella.

Nicola: We were importing a lot of things in the beginning, and sourcing things out for the best possible ingredients. And, also, we started out with a fairly small, simple menu and we progressed with time. We were very popular with lots and lots of Village celebrities — all the art deals and movie people and models.

Why were you popular with that crowd?
Frank: My first answer would be that we keep it under-the-cuff. We don't put it out there. I can call any newspaper every morning and tell them who was here the night before, and people know. But celebrities like their privacy, art dealers don't want be in competition, and people don't want to be bothered. Paparazzi would call me and ask, "Who's coming? Can I come?" No, not happening. And that's probably 85 percent of why celebrities and art dealers and models come here. They come because they are not bothered.

Who are your favorite customers?
Nicola: I would say, at this point, the neighbors. The neighborhood has been amazing, and we have customers that have been coming here since the day we opened.

Frank: Still coming here. Three days a week. Four days a week. And we have celebrities where, every time they're in New York, they're here. They'll call us from the airport.

Like who?
Frank: Jennifer Anniston will call us from the airport. Yes, I know who she is, but she's a real person. She'll come in and kiss everyone hello. They walk through these doors, and they feel like they're in a home and no one's gonna bother them. And I think that's really got a lot to do with it.

Nicola: Richard Gere was coming in here from day one, and we saw him through all the different stages of his life and career. One of the things we knew was that he doesn't want to be bothered. One time I remember Sylvester Stallone and Dolly Parton sitting at this table here. It was wintertime. But somehow, somebody saw and told somebody else, and then there were 20 people outside the restaurant. We had to go and say, "I'm sorry. It's not very nice that you're watching these people."

Frank: We had Rushdie when he wrote that controversial book — we had to cover the windows. That was a little bit frightening, actually. When Tom Cruise comes, I think he has the most paparazzi. I would say maybe 60 or 50 of them. Everyone he's come with, like the Beckhams, Katie Holmes...

Nicola: That was a little bit over the top.

What's the key to keeping the food consistent?
Nicola: We're watching 24 hours a day. I'm the worst critic here. I think it's important that the food is the same, and that it's the best that it can be, all the time.

Frank: People need their expectations to be fulfilled when they arrive. They know we have fresh pasta, homemade. When they come, if we don't have homemade pasta today, we're better off telling them that we don't have it rather than try to pretend we have it and get by with something from a pasta shop and have it not be the same consistency. People are smarter than you think. No one fools like a fool. So what we do is, we do it, we do it best, and we do it exactly the same way for 30 years.

Nicola: We have had these people, like our chef Antonio, in the kitchen from the very first day.

He must be happy then.
Nicola: He's happy.

Frank: Well, it's not easy taking orders for 30 years.

Nicola: He was 30-something, now he's 60-something, but he's always here. During the hurricanes and all these crazy storms...during 9/11 when they closed all the bridges, he walked from Brooklyn. How? I don't know.

But what has changed over the years?
Nicola: Nothing about the space. We had new bathrooms constructed a few years ago. We had a fire a few years ago. That was horrible. That was the worst thing ever for me, because this is like my house. I grew up in here, and it was very sad. 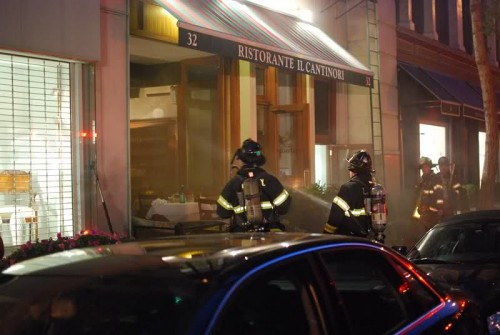 [The fire in 2011]
What was the cause of the fire?
Frank: They say that the gas. You know when you start your barbecue in the back yard? The gas was running and the fire ignited it, and the rest is history.

Nicola: It was mostly inside the hood, but there was a lot of damage done to the whole restaurant.

Frank: The whole back of the restaurant was damaged. Once they came in with water, rightfully so, because you don't want to have extended other damage, but they did a great job — the firemen did a great job.

How many months were you closed?
Nicola: The fire happened October 9, and New Year's Eve, we were open. It took a lot of perseverance to open.

Frank: People walked in that night and were like, "I can't believe you're open. How does everyone know you are open?" I responded, "The same way you did." We did over 200 some odd people that night. But we didn't advertise, it was just people passing by. That's how it happened.

Nicola: And while we were closed, we didn't realize how much people missed us. We would go to restaurants, or we would just be here while the restaurant was being fixed, and people would come and say, "Oh my God. When are you going to open? There's no place like you. We miss you so much." We knew that it was going to be a good reopening. It was encouraging.

Frank: We would go out to restaurants and we would see our clients and they would say, "We're not here because we really want to be. It's because we're not with you." It's okay, you're allowed to eat at other places. 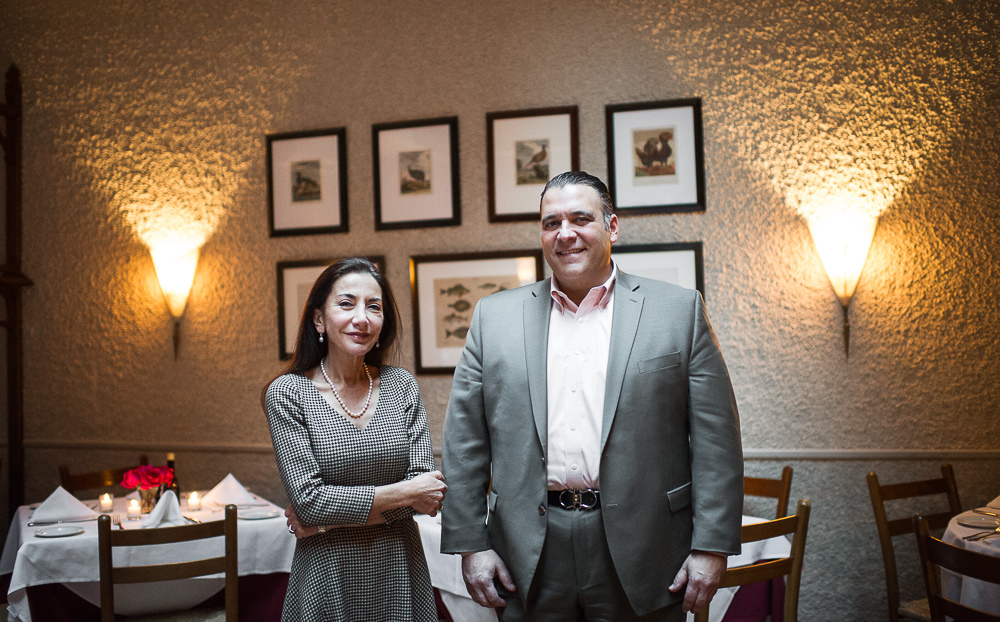 [Daniel Krieger]
Really good restaurants sometimes peter out after five or 10 years. Why do you think you've lasted so long?
Frank: Every time there's something going on in the world, we have a pick-me-up. We've been in millions of magazine shoots. We were in Sex and the City, one of the episodes. That just puts you over the top. We decided we weren't going to do that for like two years. Finally Sarah said, "I come here all the time. I'd like to do a shoot here." We did it, and we had to add a phone line because that's how crazy the phones were. Now that it's syndicated, we'll always have that re-lift. We pick up whenever it's on the TV or the cable network. You know, the power of the cable and the TV...you don't think it's so important because people read, people don't watch. But there are plenty of people that do.

Have you ever had to make concessions to the economy?
Frank: No buy-one-get-one-free kind of thing, Wednesday and Sunday at Carvel, no. That's usually the kiss of death. When you say, "You can get a free glass of Champagne" if you do this, that's usually a sign that something's wrong. Fortunately for us, the people who come here like the place like it's their own. When Nicola changed the light fixtures, they actually told us, "We don't like them." And we actually had to say, "We're sorry you don't like them, but we do." They fought that, and they didn't want the change. It's amazing. People have taken us in as one of their own.

Do you ever get sick of working together?
Frank: I love Nicola. We work like yin and yang. We're able to disagree and agree, which is beautiful, because most people when they disagree, that's it. We listen to each other's reasoning, we listen to each other's ideas, and we figure it out. And that's a lot of the success. We're able to work with each other like a hand in glove. We don't have egos, and that's a major part of break-ups in restaurants. When a restaurant is successful, everyone thinks it's because of them. And when a restaurant is not doing well, everyone wants to finger point.

Nicola: Here, there's no ego, and the staff that works here has been here for many years and is so dedicated. They really care, and we all come together.

Frank: Just like the night of the fire. We had people here. Someone offered to bring 40 people to fill the basement with water. I said, "Sir do you see those people across the street? That's the staff of Il Cantinori!" Everyone made it here that night by 10 o'clock, and they came the next day for the next week to clean it all up, because they know this is their home, and they love the clients.

Nicola: You can count on them. They're incredible. And the kitchen always delivers.

Do you still get a lot of people from the industry?

Nicola: People have opened so many restaurants that have tried to be like this. People have used us as a model when they've opened many, many places.

Frank: You know what it is? Il Cantinori was never really a trend, it was just hot. Trendy restaurants come and go. People would look at us and say, "Wow, that place is still happening? It's still on the up and up." But we were never trendy, we were just really hot. And no one has thrown the ice on us yet, to cool us down.

This interview has been edited and condensed.
· All Coverage of Il Cantinori [~ENY~]