Where to Eat at John F. Kennedy Airport (JFK)

Share All sharing options for: Where to Eat at John F. Kennedy Airport (JFK)

Need a good place to eat at JFK Airport? Look no further. Just in time for the holiday travel season, here's an update of Eater's guide to JFK. It maps out every food option throughout the numerous terminals, from quick snacks to leisurely meals, celeb chef cameos, and some major developments since the last update in Terminal 4. It's all you need whether you're rushing for a flight or hoping to kill a long layover. 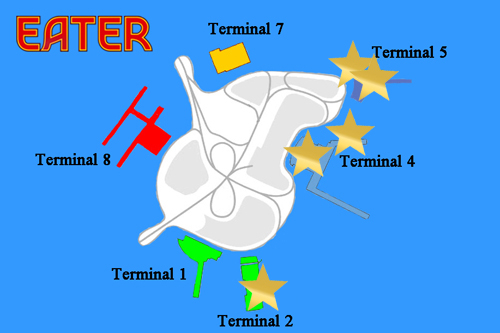 1) Shake Shack/Blue Smoke on the Road: Delta's Terminal 4 now has branches of two of Danny Meyer's most beloved restaurants. They face each other, and it's hard to choose between them. Shake Shack offers all the favorites you find at the other locations, plus breakfast sandwiches and good coffee in the morning. Blue Smoke on the Road serves ribs, sausages, and sandwiches, plus beer, wine, and cocktails. This is a great place to hang out and watch the game, if you're got some time to kill. [Terminal 4, Post-Security, Gate B36/35]

4) Deep Blue Sushi: Probably the best sushi you will ever eat in an airport. Deep Blue's fans are known to arrive extra early at the airport or stay late after a flight just to have a taste. Deep Blue on the Fly, next door, offers grab and go options. [Terminal 5, post-security, Marketplace]


Delta announced the revamp of Terminal 2 back in September, and as of now all of those shiny new, celeb chef backed restaurants from airport restaurant company OTG are open at least in temporary form. That means Todd English's panned Bonfire restaurants are out, replaced by Laurent Tourondel, Cesare Casella, Robby Cook, and Andrew Carmellini.

This iconic terminal (the "flying saucer" that originally housed Pan Am) was closed for demolition over the summer. Among the casualties is Bar Brace, the panini shop from 'Inoteca's Jason Denton, which was previously one of Eater's top five dining options at JFK.

After a big revamp this past spring, this is now the terminal to dine. There's a Marcus Samuelsson restaurant, the only East coast outpost of Nancy Silverton's La Brea Bakery, and not one but two Danny Meyer spots, plus more on the way.

Still to come is Street Food, a fast-casual restaurant from Marcus Samuelsson, Camden Food Co., an artisanal market, Le Grand Comptoir wine bar, and a second Shake Shack. Many of the fast food establishments and casual dining counters from the old terminal are also still open. Here's a list of the pre-revamp businesses:


· The Palm Bar and Grill: The JFK location of the famed Manhattan steakhouse opened in early 2010 (pre-security, Mezzanine West).*