With spiraling real estate prices, it's harder than ever to start a restaurant in popular Manhattan neighborhoods like the Lower East Side, the East Village, and the West Village — and make a profit. One well-worn gambit involves taking commonplace dishes such as hamburgers, pizza, and noodles and glorifying them with boutique ingredients and improved presentations, imbuing relatively inexpensive raw materials with extra value. Unfortunately, the market in these comfort foods has become so crowded that an older place will probably go out of business each time a newer one opens up, just as Umami Burger has sucked the life out of the other upscale burger joints in the immediate neighborhood.

Another modern way to make money in restaurants is to micro-focus, on the theory that making just one or two things well means you can mount a much smaller kitchen, and save by buying ingredients in bulk. We've seen this over the last decade as cafes have specialized in meatballs, toasted cheese sandwiches, peanut butter sandwiches, and lobster rolls. Simplifying even further and focusing even more narrowly may be the wave of the future, sometimes even inventing new dishes just for novelty's sake. Serving a few small eat-and-run items also means you can dispense with most of the dining room — other than a table or two or an eating shelf — and do without a greeter, waitstaff, and wine steward.

We've seen this phenomenon at Hybird, Questlove's fast-food counter in Chelsea Market specializing in chicken drumsticks (now gone belly-up); at Sigmund's Pretzels on Avenue B, a bakery-café hybrid focusing on pretzels and pretzel sandwich (now being reconfigured); at Pota-Topia in Greenwich Village, offering mix-and-match potatoes and toppings; and at This Little Piggy Had Roast Beef on First Avenue, obsessing on roast beef sandwiches. The key to micro-focusing is to choose a commodity that will go over big with the public almost overnight, perhaps something with a proprietary aspect to it, at an affordable price point. Here are some recent examples of the new breed of micro-focused establishments. 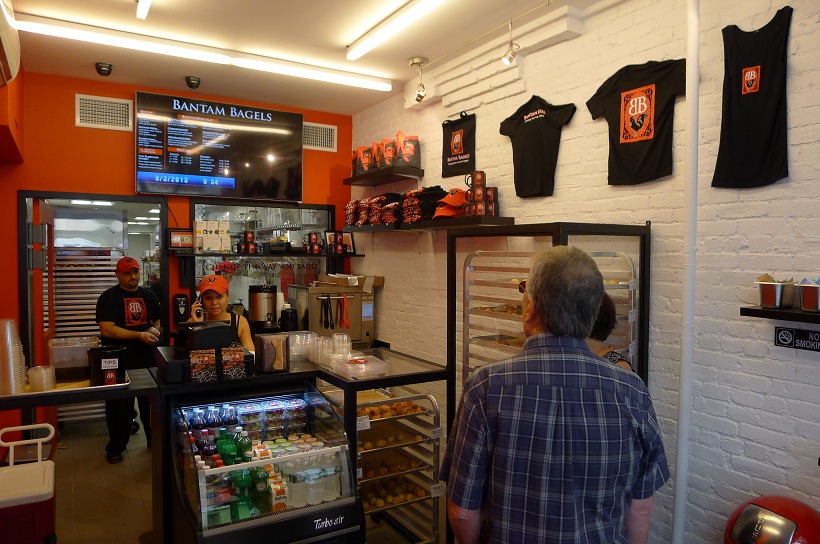 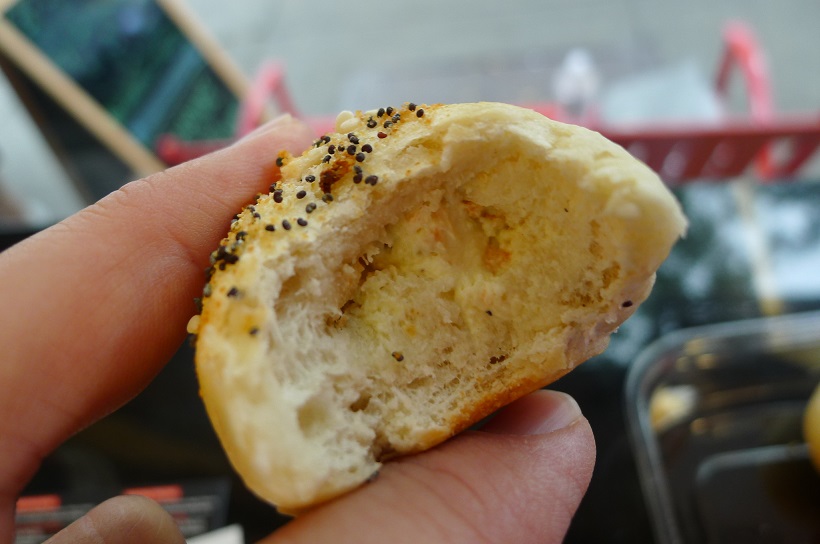 The micro-focus of Bantam is small spheres of glutinous bagel dough filled with just a dab of traditional or innovative bagel toppings, created in a narrow bakery at the back and rewarmed in a convection oven by clerks who also make the sales. Some of the "bagel balls" are savory (Hot Pretzel, Vegesaurus Rex) and some are sweet (Summerberry Shortcake, French Toast), all priced at three for $3.50, plus tax. 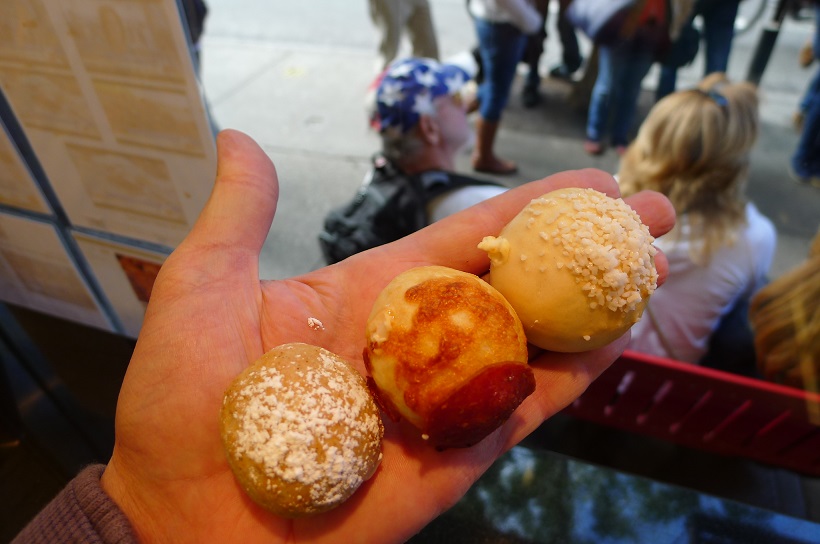 The place makes sense for carbo-phobes, and also with the myriad strolling food tours that have turned this block of Bleecker into an open-air food court. Purchased individually, a single bagel ball is the perfect size for food tourists; however, if you crave the puffy luxuriance of a real bagel with toppings slathered on, three bagel balls falls far short in volume, yet is nearly equivalent in price. The novelty of these starchy orbs (many of the creamy fillings end up tasting only infinitesimally different) is a big selling point, and you wonder if the product itself is good enough to encourage repeat visits. Will the place generate loyal customers? Only time will tell. 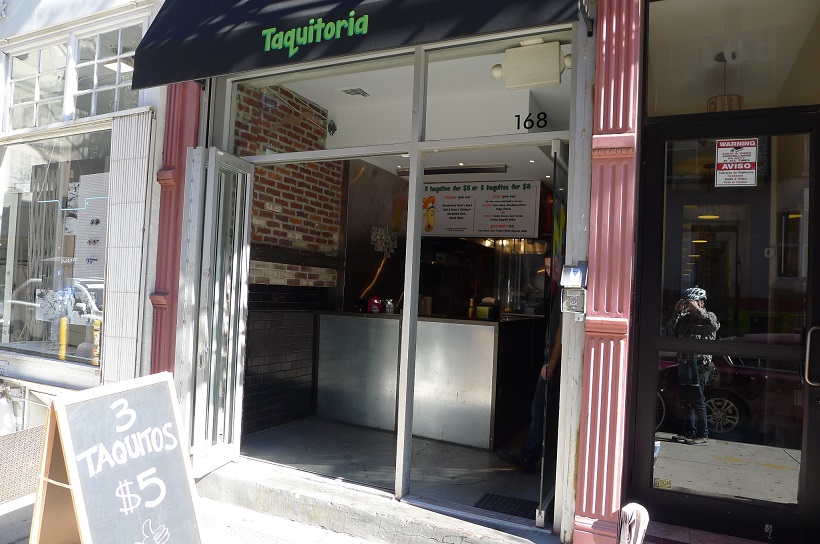 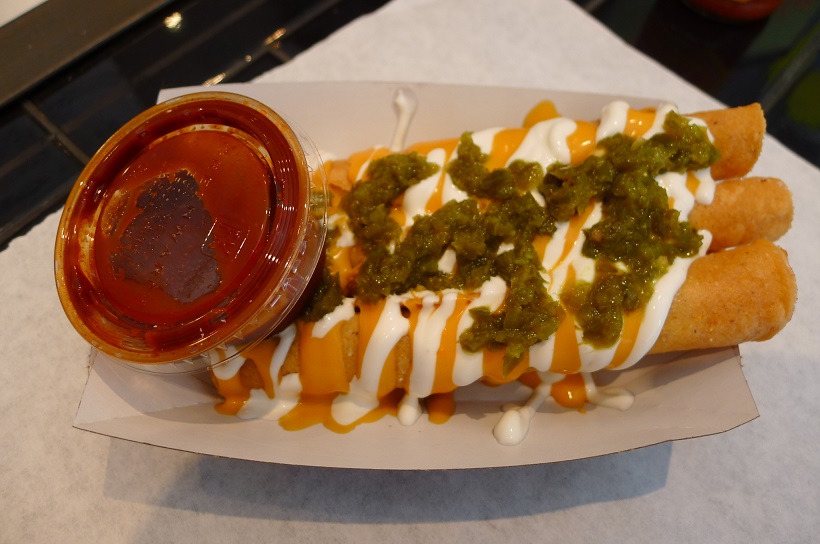 Your response might be, "They're really not knocking themselves out, foodwise" (one guy with a small deep fryer is the kitchen), only these taquitos are quite good, and quite brilliant, concept-wise — though at three for $5, you're going to have to eat at least six or nine to feel fed. Taquitoria has some secluded seating that trails off into the interior of the establishment, meaning you can treat the place as a destination for intimate dates. Will the concept work? It already has. 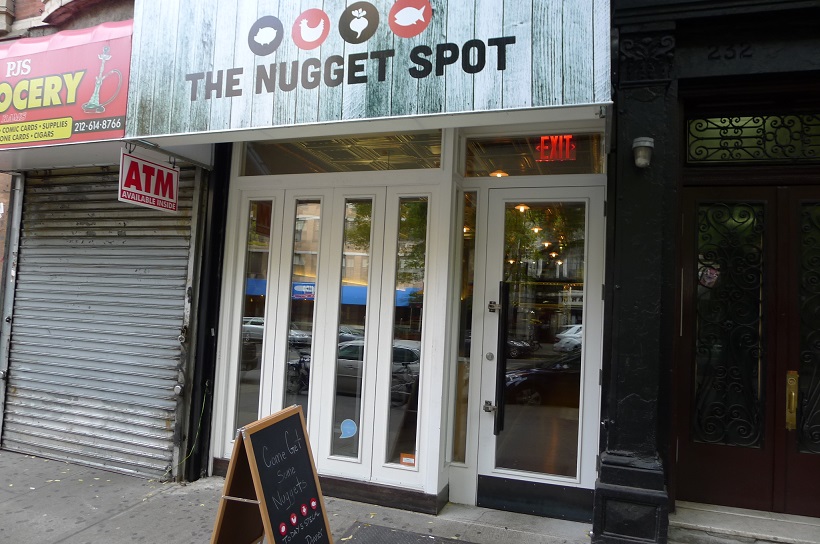 Recently opened on 14th Street on the East Village's northern frontier, The Nugget Spot micro-focuses on small breaded morsels of chicken, pork, and fish deep-fried like Chicken McNuggets, presumably aimed at foodies who loved the McDonald's product as children and now seek to see them gourmetized. The concept is simple enough, only becomes much more complicated when you have to choose a breading from a list of 10, and sauce to go with them from another list of 10, showing how micro-focusers can run amok by taking back the simplicity of the concept and making the whole thing seem too much like a math problem. 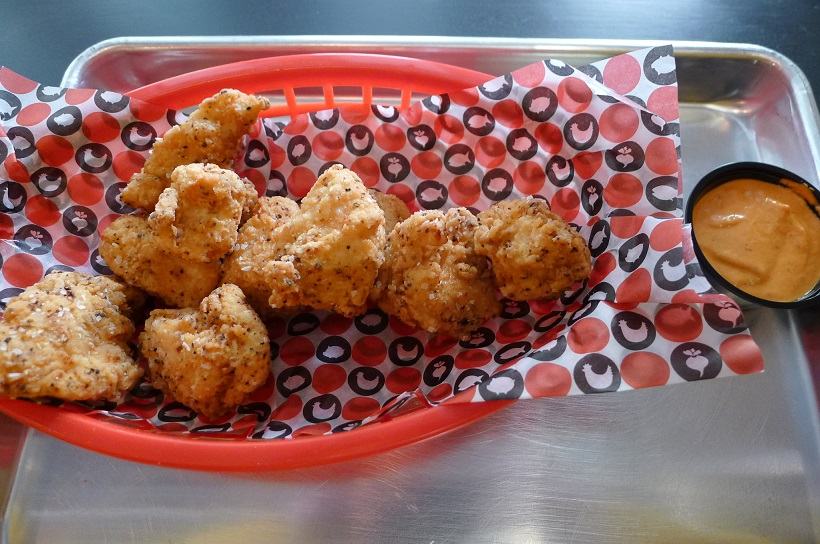 When I went this weekend, there were no fish nuggets and the number of breading choices had been reduced to four, indicating that, either the proprietors had become lazy, or maybe realized that they'd taken a simple concept and made it confusing. Also, while the website lists the price of the standard eight to 10 nugget order as $6, when I arrived it had inflated to $7. (Keep your websites updated, micro-focusers, or customers feel cheated!) The pork nuggets were quite delicious, sinewy and rich tasting, in spite of the too-sweet Cap'n Crunch breading I'd ordered, while the chicken version, made with tenders, were a little tough if you expect the billowy softness of actual McNuggets. The sauces tended toward the thin and sweet or the mayo-driven; only trial and error would tell you which ones you actually liked, and there was no room for experimentation on single orders. Once again, though comfortable tables are provided, it's more of a snack-and-go place. Satisfy yourself with side orders, beverages, and tax, and the cost creeps upward toward $20 per meal. 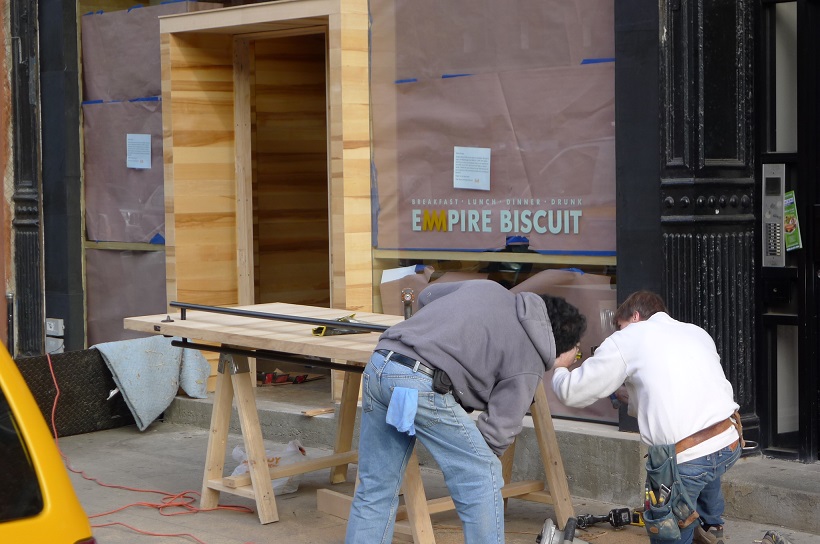 As has been well-documented, the opening of Empire Biscuit on Avenue A last week was fraught with difficulties, both in the build-out of the space and in the ability of the kitchen and counter to keep pace with the demand. In micro-focused establishments, nothing sucks like overwhelming success. Empire Biscuit, too, takes a simple concept and makes it byzantine in complexity, which may have been a big part of their problem. 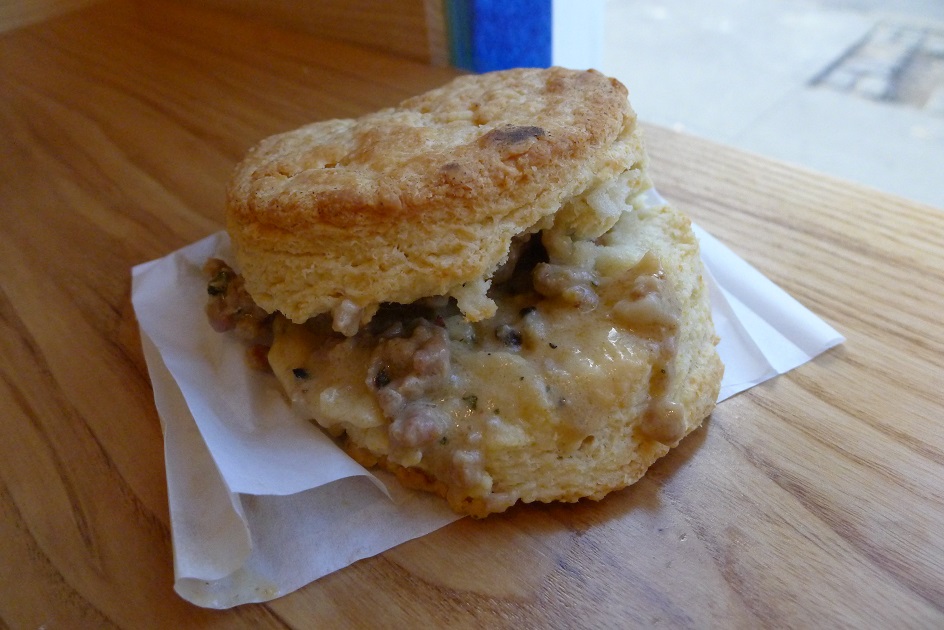 There are separate lists of biscuit-and-gravy combos and biscuit sandwiches, plus 12-each butter/spread and jam/jelly/marmalade choices in two columns, suggesting that, if the consumer has to stare at the menu board for more than a minute to order, all is lost. (Shown: Sausage and Gravy Biscuit, very skimpy on the sausage and gravy.) Once again, with a dressed biscuit costing around $6.50 plus tax, entailing all-in prices that push $20 to fill yourself up, this is more of snacking spot. However, with seating and standing space that can probably never meet the demand, customers will still be tempted to treat this as a brunch destination for lingering with friends. The only hope is to ramp up carryout business and streamline the menu, or extremely crowded conditions and slow ordering will hamstring profits.

The name of the game, micro-focus wise, is KISS: Keep it simple, stupid!