EAST VILLAGE — Following the news of Charlie Trotter's death, the DBGB team created this little tribute next to his pan in the restaurant. Daniel Boulud also sends along this remembrance:

We are all shocked and saddened to lose a friend and such a talented, warm-hearted and honest man, so young. Throughout his career, Charlie was extremely generous with his time, team and restaurant to support many charitable causes and I was fortunate to have joined him on many occasions in his fundraising efforts. His dedication to make America a world-class dining destination was expressed in his restaurants and cookbooks he published — his creative style of cooking was a departure from the more classic approach to French cuisine. He was a true American chef and restaurateur with a European vision inspiring and educating a whole new generation of chefs. He will be greatly missed, but never forgotten.

REST IN PEACE — For more on the passing of Charlie Trotter, check out Bonjwing Lee's post about dining in his restaurant, photos from last night's candlelight vigil in Chicago, and a roundup of remembrances from food writers. Eater National also has a clip of the chef's cameo in My Best Friend's Wedding. [EaterWire]

UPPER EAST SIDE — The Fat Radish team's new restaurant The East Pole just launched brunch, with a menu that includes things like smoked salmon crostini, soft-scrambled organic eggs, bangers & mash, Dutch apple pancakes, and a fall frittata. Check out the full menu at the bottom of this post. [EaterWire]

Brunch at The East Pole: 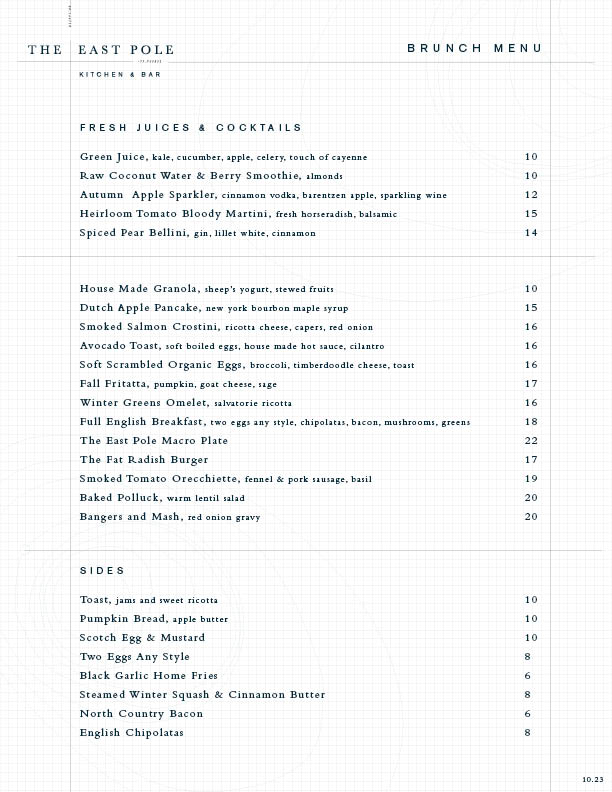