Christophe Hille on the Line Cook That Stole a Circulator

Share All sharing options for: Christophe Hille on the Line Cook That Stole a Circulator

Welcome back to Shit People Steal, in which restaurateurs write about the items in their restaurant that have been (or are frequently) stolen. Up now: Northern Spy Food Company's Christophe Hille tells the tale of a prospective line cook who pinched a pricey piece of equipment: 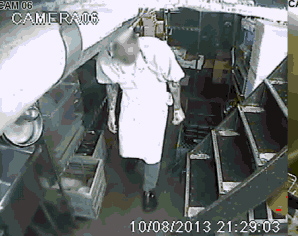 Christophe Hille, owner of Northern Spy Food Co.: When I was in culinary school back in the late '90s, one of my instructors — who was palpably pleased to be cooling his tired heels in northern Vermont — told my class a memorable story about being a chef out in the real world. While working at the Rattlesnake Club in Detroit, he was handed the unenviable task of confronting one of his line cooks for theft. The alleged thief was known for two habits: keeping a .357 Magnum in his locker, and leaving work every few nights with a whole beef tenderloin strapped to his leg. Both turned out to be true. The restaurant world, the instructor wanted us to know, was peppered with rough characters and bad behavior.

But after 15-odd years in the food industry, I've never had to deal with an armed cook and I've run into very little employee theft. In four years at Northern Spy, we've had just a single stretch of stolen iPods, Metrocards, and server tips, which stopped on the very day that a fast-talking cook with sticky fingers finally did us the favor of no-showing.

So it was almost charming to discover that a cook trying out for a kitchen position a few weeks ago was brazen enough to steal one of our prized PolyScience circulators, which we use to cook eggs, chicken livers, and other things to precise temperatures.

Since food is apparently the new rock, it only makes sense that, instead of stealing rare guitar effects pedals from bands at gigs, the crooks in the business now boost specialized sous-vide cooking gear. The individual in question — whom we'll call George — was working with us on the night of our recent Sherryfest Dinner, and excused himself after a mere hour and a half on account of "not feeling it."

Thanks to our experience with the original Mr. Sticky Fingers, we'd installed security cameras around the restaurant. George's shopping expedition unfolded in view of three of those, and they reveal a swift and lucky little heist. In the minutes before leaving, he heads to a particular spot in the basement, picks up the circulator, walks to the changing room, puts the circulator in his backpack, and leaves the building. Before, during, and immediately after this maneuver, several cooks and managers come and go through the same area, missing catching him in flagrante by a few minutes.

Like all classy crooks, George left us his calling card — in this case a full resume with phone number, email address, home address, and references. So we sent him an email with a few provocative video stills. No response. We called him and suggested he return our gear. Not effective. We filed a report with the 9th Precinct, which lost the thumb drive we gave them with the video, checked his references, and asked us funny things like if George's was a pretty typical cook's resume. Bumbling (or?sandbagging?) aside, the cops must have ultimately reached him and convinced him to return the circulator, which George did a week ago.

So what are the upshots of this escapade? George is still out there disappointing and defrauding employers (you've been warned). We've finally made good on the cost of our simple security system. And it always pays — like Warner Wolf says — to "go to the video tape!"