A First Look at Pizzetteria Brunetti in the West Village

Share All sharing options for: A First Look at Pizzetteria Brunetti in the West Village

17 years ago, La Pizza Fresca opened on East 20th Street in the Flatiron, the first place to actively try to reproduce the original pizza of Naples in spite of nearly a century of New York pizza history. And it pretty much succeeded at concocting the small, floppy, expensive, one-person pies. Damp and thin in the center, doughy and puffy along the circumference, they had to be eaten with a knife and fork. Moreover, these pies were certified as genuine by Associazione Verace Pizza Napoletana, a modern association of Naples pizza makers seeking to seize the high ground and grab the pizza crown back from New York City, where it so obviously belongs. Imagine, Italian dignitaries parachuting into NYC to certify our pizzas as genuine!

In the ensuing years, we've had over two dozen places flogging these small foreign pies, some really excellent and coming pretty close to the output of pizzerias such as Da Michele and Trianon in Naples itself. The problem is, while our Naples-style pizza joints could make nearly identical crusts via imported ingredients and beehive-shaped, wood-burning ovens, these New York upstarts all went ape-shit when it came to inventing new toppings, as if that aspect of the facsimile pie of Naples didn't matter where authenticity was concerned. They also cut their pies into slices — which is generally not done in Naples — and sometimes added apps, pastas, and pricey wine lists to their sprawling menus — though the slurp of choice in Naples pizzerias is that great Italian beverage, Coca Cola.

It was pretty comical when Keste planted itself across the street from John's on Bleecker Street, pitting our original coal-oven pizza against the evolved Naples product. Notice I didn't say "Neapolitan," since that is what we call our own big, round, thin-crust New York pies. Remember, our city's best pizza is found at a place that stakes a 90-year-old claim to also being Neapolitan: Totonno Pizzeria Napolitano. That is the place from which the traditional New York pie descends. (Why? Anthony Totonno was the first pizzaiolo at Lombardi's, our first pizzeria.) 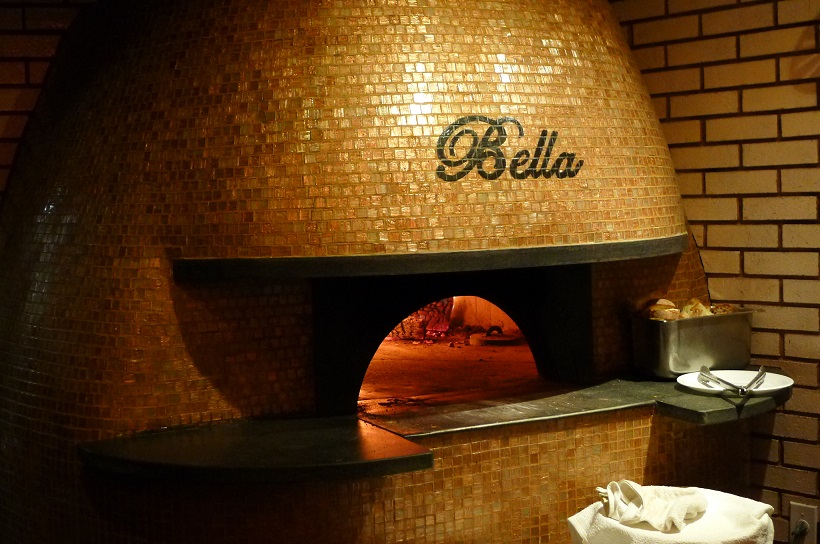 Now a new wood-oven place has opened up north of Abingdon Square in the West Village, also claiming to make the True Pie of Naples — Pizzetteria Brunetti (626 Hudson St, 212-255-5699). The new storefront is intimate and atmospheric, with a gold-tiled oven named Bella, like some octogenarian Jewish lady. There's a nice outdoor space in the back, warmed with radiant heat trees of the type you see all the time in San Francisco. Brunetti is a first branch of a popular, but less ambitious pizzeria in the Hamptons, which is great because it means the pies constitute a sort of Long Island/Naples hybrid, a nuanced addition to New York's extremely varied pizzeria terrain. 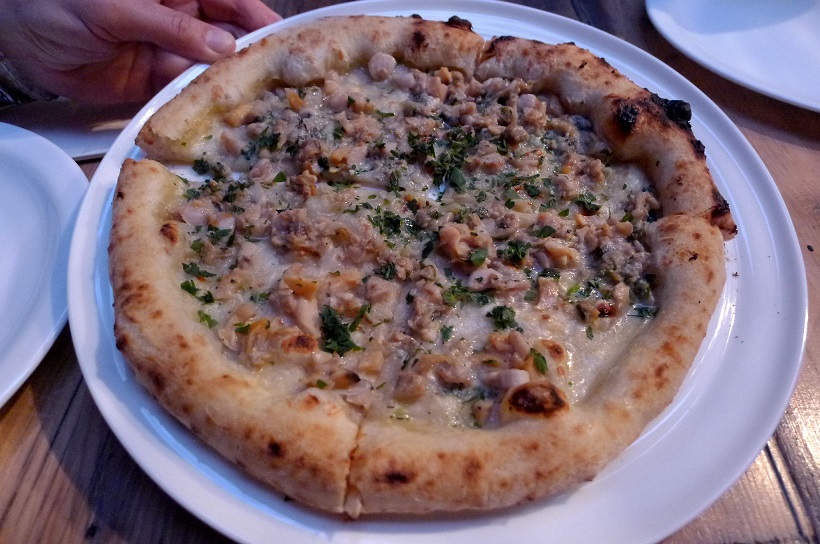 Though atypical Naples-wise, one great choice at Pizzetteria Brunetti is the clam pie ($20), utilizing a shellfish beloved of our city's Sicilian-Americans, and also a signature type of pie in both Staten Island and New Haven, Connecticut. Here the pizza, about nine inches in diameter, is profusely topped with shelled clams of scintillating freshness, minced fine enough to facilitate easy scarfing. 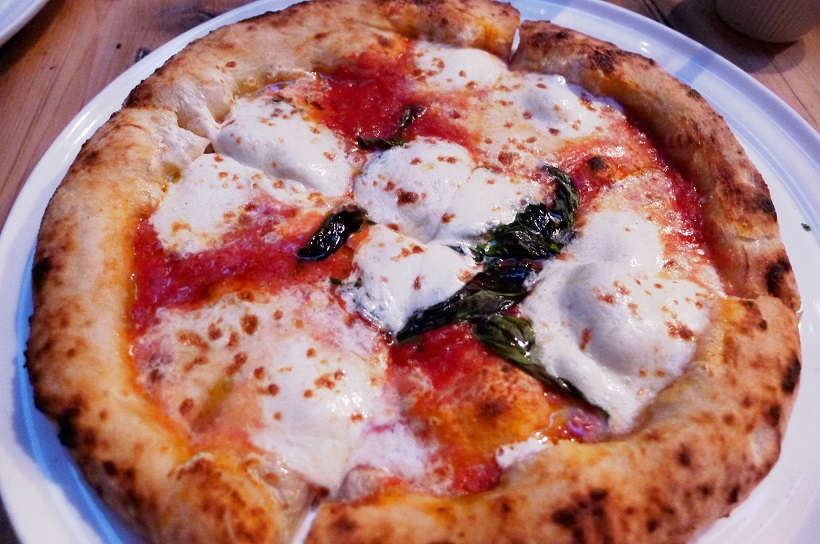 Naturally, my party and I also tried the margherita, the legendary pie of Naples invented in 1889, just a few years before pizza debuted in New York, and probably inspiring the use of cheese as a standard topping on pizzas here from the very beginning. The version at Brunetti is pleasantly soupy, nicely topped with fresh basil, but possessing a crust a little firmer and less glove-like than you'd find in Naples, with about twice as much cheese. 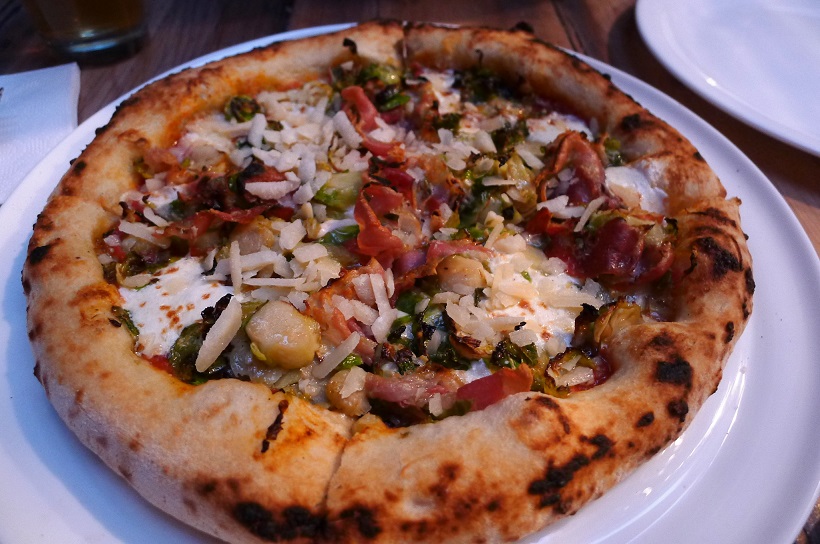 Some off-the-wall pizza toppings at Brunetti work at least partly. A Brussels sprouts pie ("cavolini bruxelles," $19) also uses pancetta and other salty and aromatic ingredients, making for a chewy, mouth-filling flavor almost too dark and complex for a pizza. There are 18 further choices, some Naples-like in their toppings, some decisively not — like the one bombed with sliced meatballs, or another featuring the misspelled "sopressata." 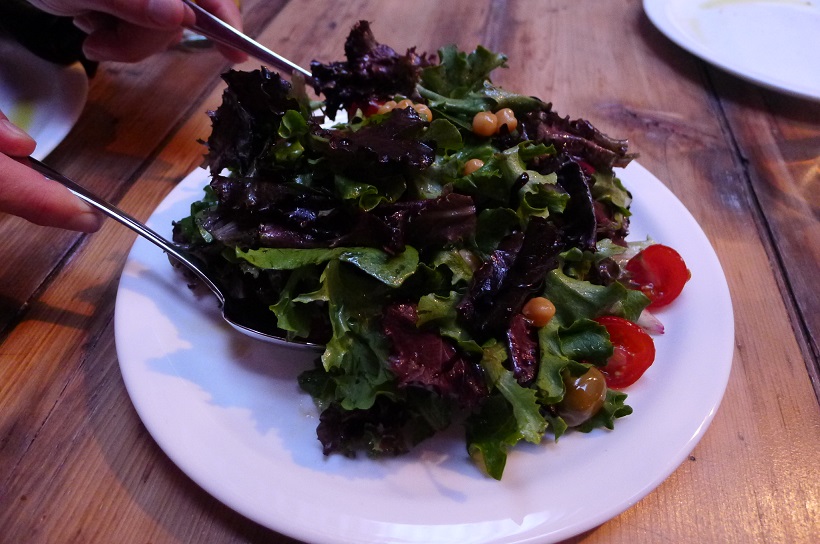 The menu at Brunetti is pleasingly spare, and we started our meal with a light salad of baby lettuces, chickpeas, green olives, and tiny tomatoes cut in half, glossed with a sweetish dressing ("salad pulcinella," $11), one of five salads offered. There's also a meat and cheese platter, and a handful of other apps, like the giant Sicilian rice balls called arancini — yet another indicator of the Sicilian-American underpinnings of the place. Brunetti has an interesting beer and wine list, including an Italian beer made to resemble a Lambic. And where else can but New York City can you wash down a Long Island-influenced Naples pizza with imitation Belgian ale? 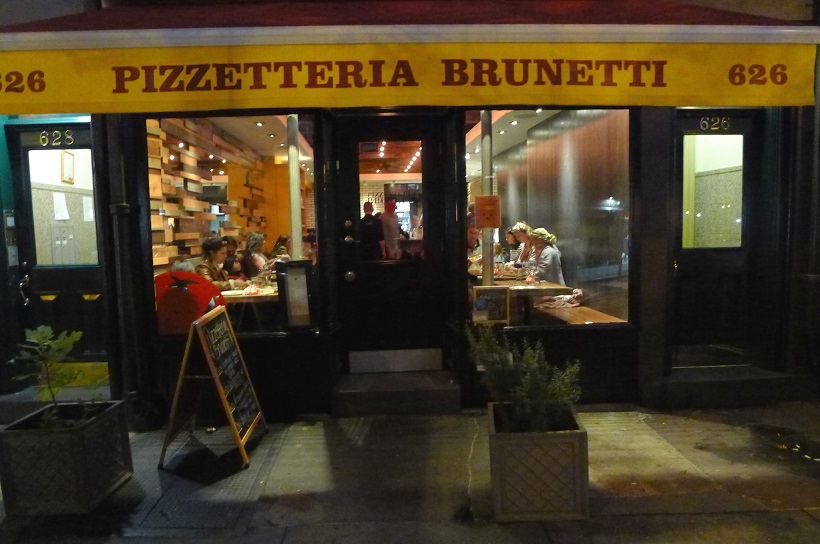