Gotham West Market is an ambitious and relatively expensive food court located at the corner of 45th Street and 11th Avenue, almost in the shadow of the Intrepid. The eating establishments bivouacking there are taking a big chance that the lunchtime office crowd will traipse over from Times Square, Columbus Circle, and the Garment Center, and that the place will become a bonafide dining destination in the evenings and on weekends. One of the most illustrious tenants in this concrete-and-metal ground-floor showroom is Ivan Ramen Slurp Shop.

A legend in Tokyo, namesake noodler Ivan Orkin has been staging occasional pop-ups around town for a year or so, prefatory to opening a full-blown Lower East Side ramen parlor. I'd tried his noodles at a Smorgasburg charity appearance after the hurricane last year, and was anxious to get another sample, so I flew on over soon after the food court opened. It also features El Comado, a Seamus Mullen tapas bar; an offshoot of Saltie sandwich shop called Little Chef; and a Blue Bottle coffee stand, among several other counters, which are arranged in a great circle. 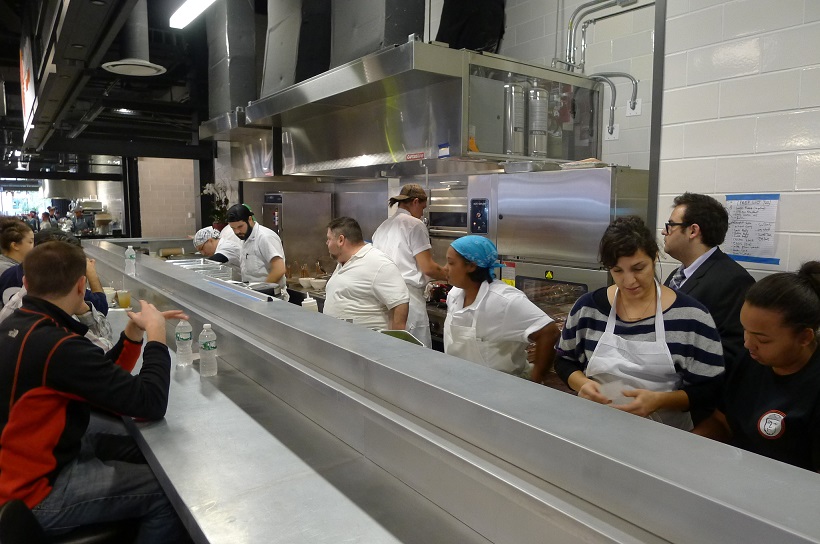 Despite the fact that word was not out yet, and the other establishments had only a handful of customers, the 20 seats along a counter looking into the shallow kitchen at Ivan Ramen were nearly all filled. There were seven cooks, including Orkin himself, a pair of cashiers, an expediter, and a couple of managers, who helped Orkin oversee the whole shebang, making the behind counter area quite crowded. The kitchen hummed like clockwork, and orders were delivered around five minutes after they were placed. Ten boiling pots for noodles at a prep counter facilitated quick turnarounds. Other seating is available at common picnic tables in front of the noodle bar, and these were about half-filled, making perhaps 40 ramen customers eating at one time in total. 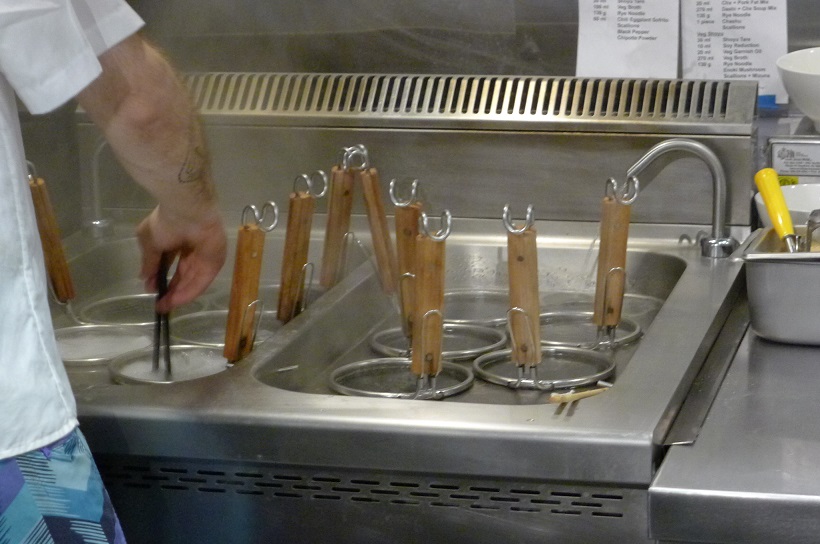 The menu is limited to five ramens (three soups and two mazemen, or semi-dry noodles) and three rice bowls, plus a few sides that no one seemed to be bothering with. Not wanting to slurp a hot soup on a balmy late-autumn day, I ordered the chili eggplant mazemen ($13), one of two vegetarian ramen options. 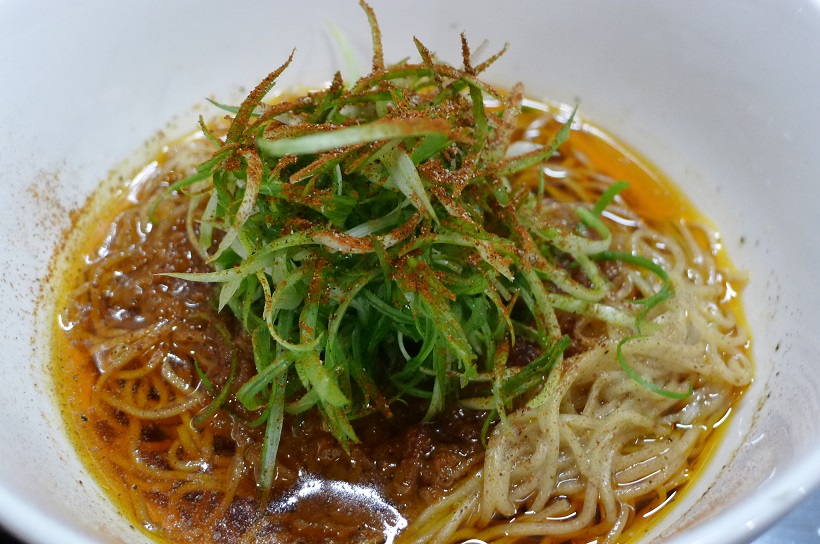 Unlike the mazemen at Yuji Ramen, the noodles here rested in an oily chili broth almost profuse enough to be called a soup. The ramen in this case were made of rye and were quite nutlike. Shredded scallions dusted with shichimi spice powder billowed above the bowl, and the eggplant was mainly just a flavor in the broth and perhaps a bit of mashed pith. It was a really excellent use of some interesting noodles. 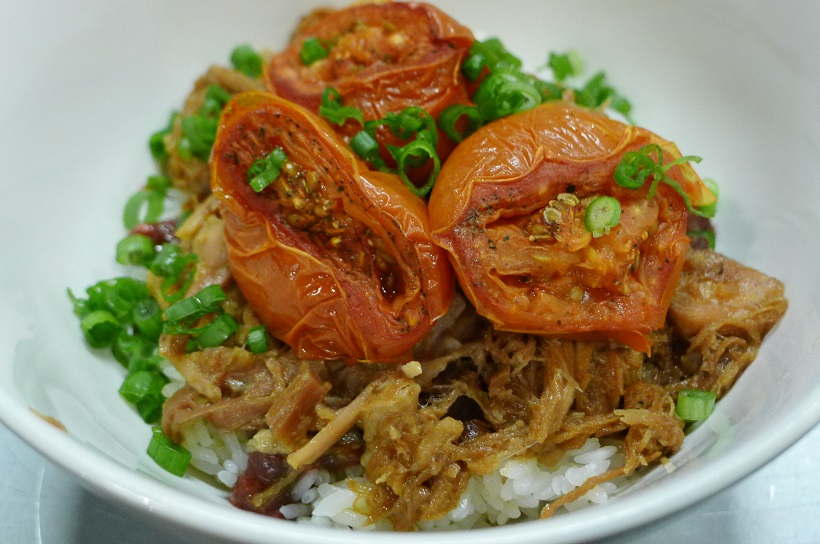 The pork donburi bowl ($12) was not quite as exciting. It was decorated with whole poached plum tomatoes, and the pork was present in matted shreds flavored with wasabi and salted plum, giving the whole preparation a hint of salty sweetness. Nevertheless, it represented a substantial amount of food for the money. There's a version of the same dish featuring whitefish and salmon roe, and yet another described as curry rice with shaved ribeye and pickled radish. Whatever his inventions, Orkin seems intent on staying within the standard Japanese flavoring scheme. While I chose a fairly off-the-wall ramen, there are also more standard ones based on shio (salt) and shoyu (soy sauce) broths, in the Tokyo style Orkin has helped promulgate. 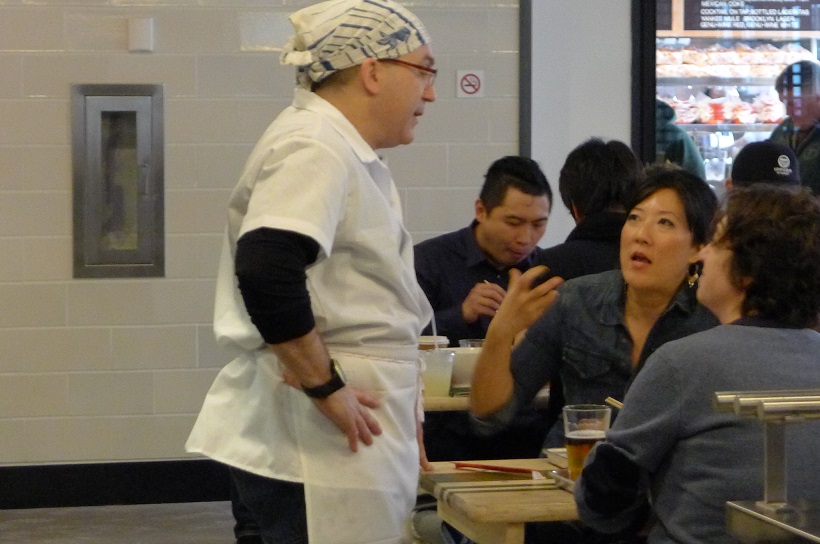 As I wiped a dribble of chili oil off my chin, the pace had slowed somewhat and the chef made his rounds at the counter and picnic tables, asking his eager customers how they liked the noodles.
· All Posts by Sietsema [~ENY~]