A First Taste of Otto's Tacos in the East Village

Share All sharing options for: A First Taste of Otto's Tacos in the East Village

The address of newly opened Otto's Tacos, 141 Second Avenue, has been so many things over the last few years — including a hamburger joint called Good Guys, which died in its infancy, a Subway, a Burritoville, and part of a Max Brenner — it's almost impossible to keep track. The rent is undoubtedly stratospheric and here's hoping the new place, which specializes in small tacos with a choice of five fillings, can make a go of it via the current trend of restaurant micro-focusing. 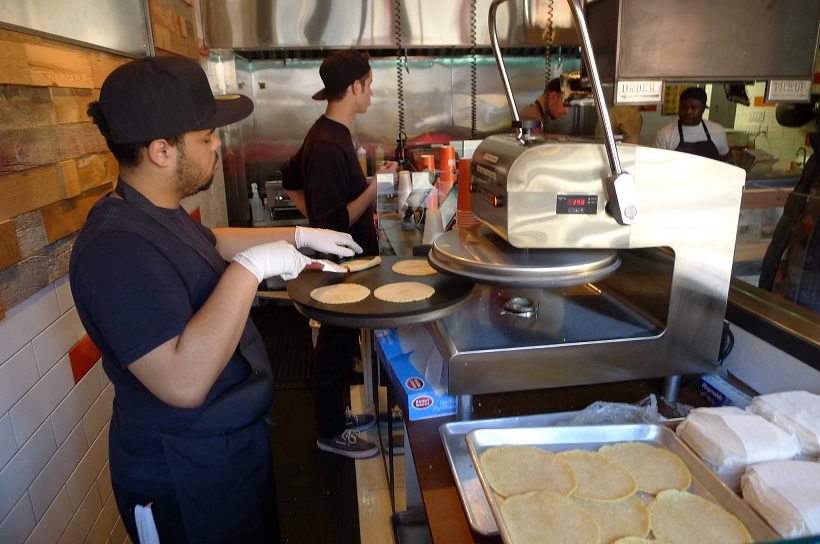 Taquitoria, which are really flautas. In an inspired piece of culinary theater, Otto's has made a small and shiny tortilla-making machine the center of attention. This mini-factory has a turntable upon which balls of masa dough are placed, then squished, into five-inch diameter tortillas. For purposes of comparison, a regular white-corn tortilla like the kind made in factories in Bushwick are six inches in diameter. Lest you think that's not a big difference, note that, by the principles of geometry, a six-inch tacos has 44 percent more surface area than a five-inch one. 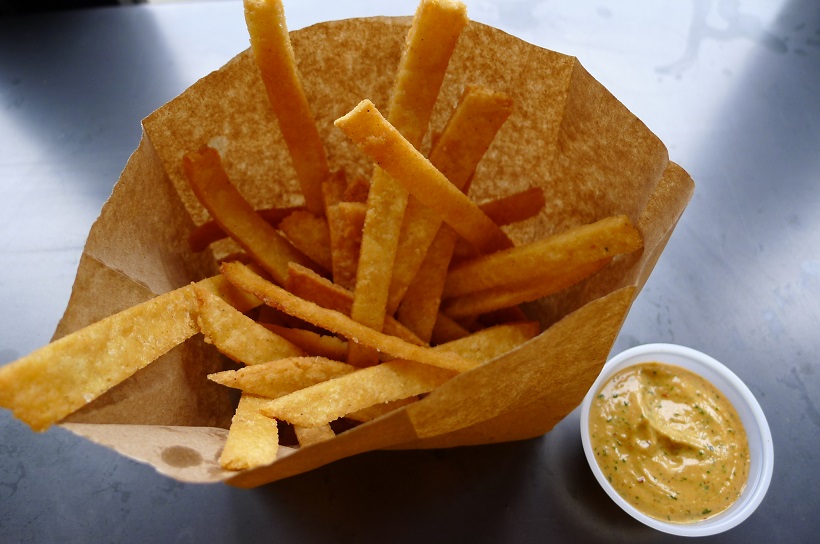 [Masa fries]
On the other hand, though Otto's tortillas are smaller, they're also thicker and the masa dough more coarsely textured, making these tortillas more filling than slicker ones with a greater diameter. And the dough placed on the Otto's turntable for squishing will expand in your stomach like a sponge. This is most effectively shown in Otto's novel masa fries ($3), bent tongue depressors of crunchy and corny fried masa furnished with a spicy mayo dipping sauce. They're great, but you're going to need a friend to finish them. 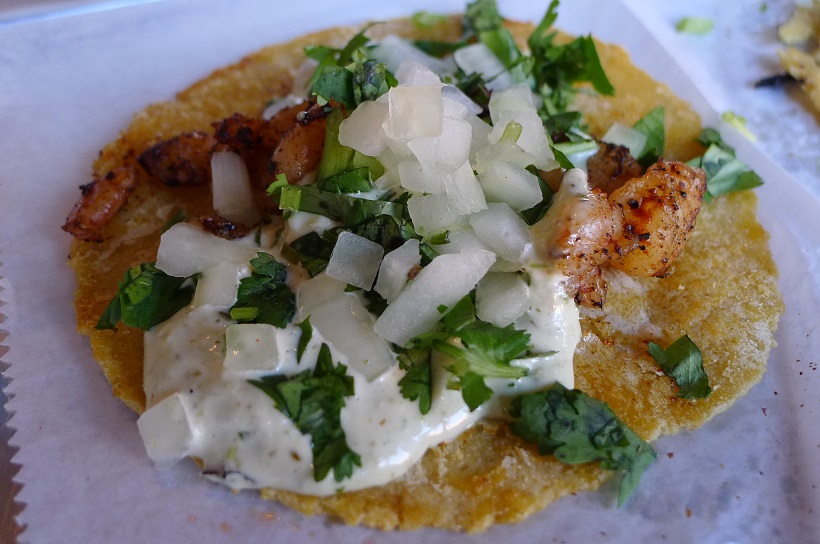 [Shrimp taco]
Dressed with chopped onion and cilantro, the taquitos feature a choice of carne asada, carnitas, chicken, mushroom, and shrimp, priced around $3 apiece. The shrimp totally kicks ass, puddled with a serrano cream sauce that's so good, I'd put it on pancakes. The other fillings are fine, though they struggle with the strong-tasting masa for flavor supremacy. 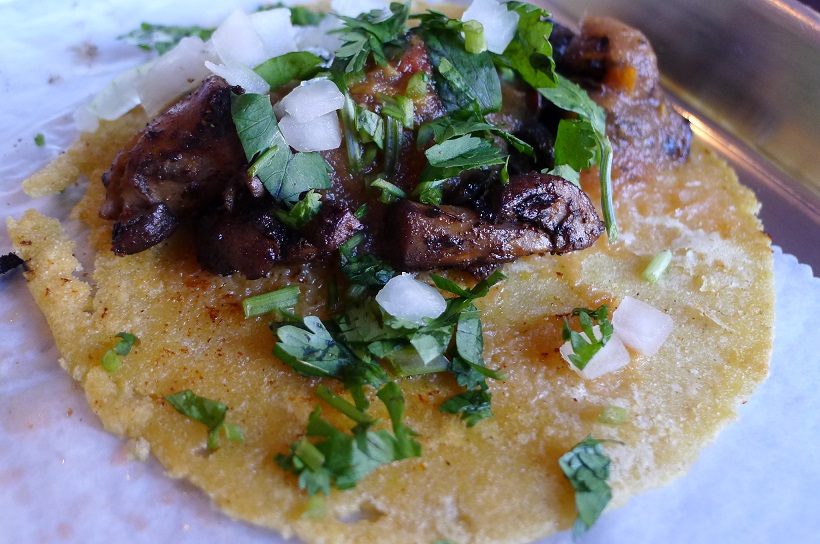 [Mushroom taco]
The fillings are worked-over enough that you can't really discern much of a distinction between chicken, pork, and beef, though vegetarians are likely to be very pleased with the mushroom version. 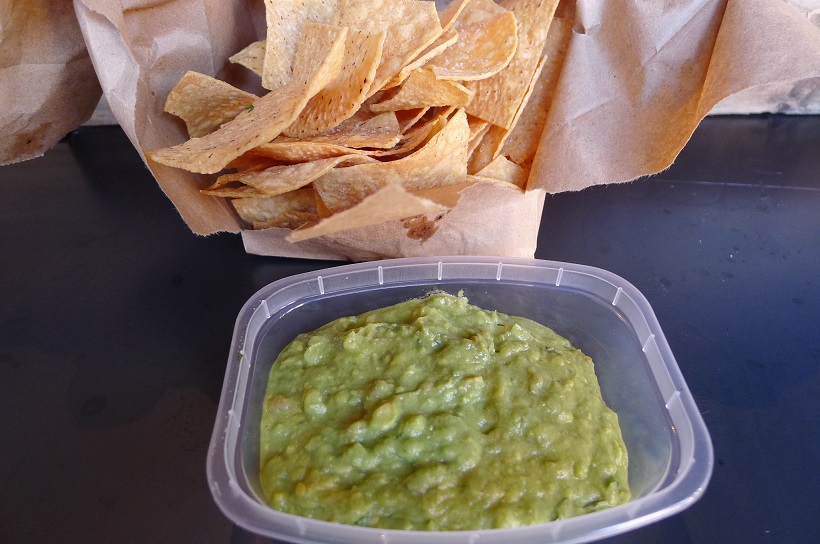 [Chips and guac]
As mentioned earlier, there are masa fries, plus chips with a choice of two salsas, chips and guac, rice and beans, and churros with a dulce de leche dipping sauce as potential sides/desserts. The guac was rudimentary, just avocado, onions, cilantro, and a bit of lime juice (it could use a bigger squirt and a little more salt) with freshly fried chips not made from the homemade tortillas, which is good, rendering the chips crunchier than they'd be otherwise. 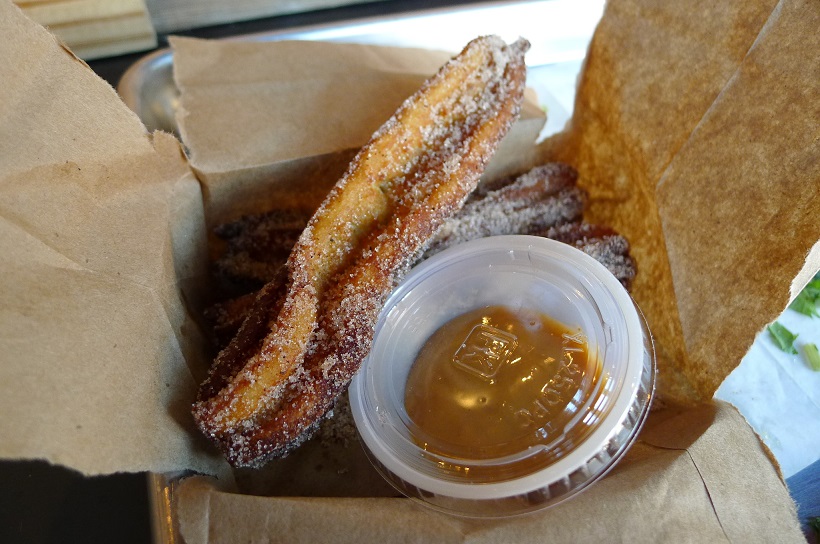 [Churros]
Love the churros, which are shorties, delivered warm, three to an order. Drinks are relatively expensive, and include Mexican Coke in a bottle ($2.75). I might gripe about the price, but renting this storefront so close to St. Marks on a major thoroughfare must have required a giant cash outlay. Good luck, Otto's Tacos!
· All Posts by Sietsema [~ENY~]