A First Look at The Cecil in Harlem

Share All sharing options for: A First Look at The Cecil in Harlem

Among African-American chefs, the dream of creating a restaurant that fully reflects the African diaspora has often been attempted, but never quite realized. What this means in practice is a kitchen as comfortable with making Trinidadian rotis and Brazilian vatapa, as with Ghanaian fufu and Southern fried chicken. Marcus Samuelsson tried it, going down in flames in a very noble attempt at Merkato 55 in the MePa back in 2008, for an audience that didn't have the slightest idea what he was doing. More recently he attempted something similar at Red Rooster, which has been wildly successful in attracting diners from all over the city to Harlem.

Now another restaurant in the same neighborhood has appeared, located in the midst of new high-rises at the corner of St. Nicholas and 118th Street, making a similar attempt to cover the full range of African cooking and its successor cuisines in a single menu. The Cecil is the work of investors that include Richard Parsons, the former CEO of Time Warner, and chef Alexander Smalls, who was the owner and chef at Café Beulah in the Flatiron District in the '90s. Before that, he was a classically trained operatic baritone who grew up in South Carolina, and thus he has a special fondness for Low Country cooking. It seems he can never get enough okra. 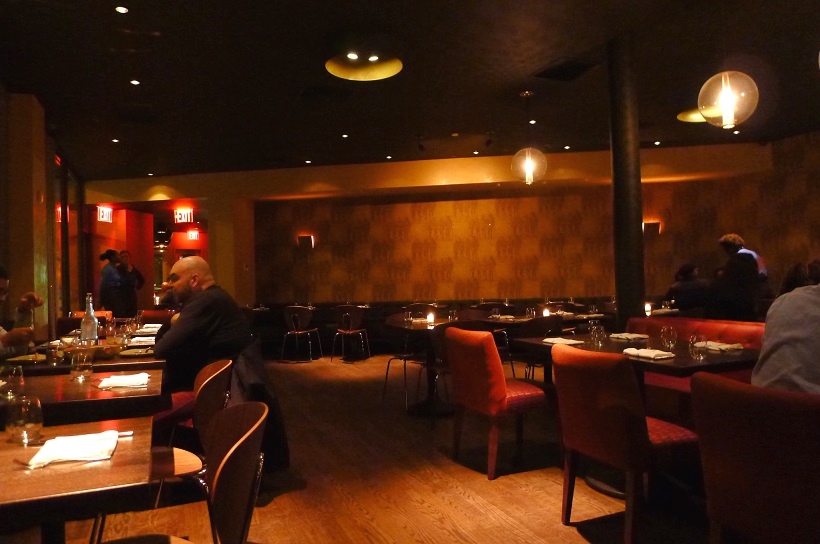 Smalls' bass voice can be heard booming across the room — which is elegant, decorated with huge palette-knife paintings in wild colors, and a scattering of objets d'art inspired by tribal African sculptures — as he greets old friends and welcomes new customers. 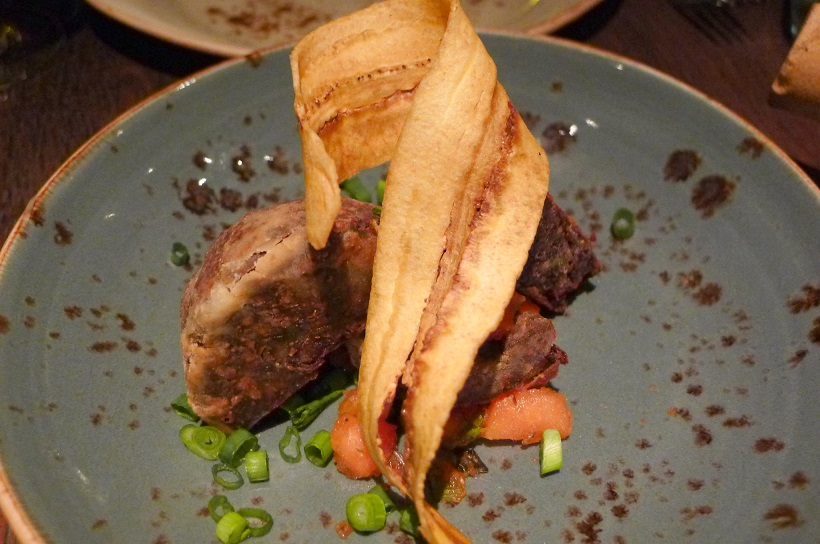 [Bean cakes]
The menu tries to one-up Red Rooster's with some success, especially when it comes to interpreting West African fare. Served with a long curling slice of crisply fried plantain and a papaya chutney, black bottom bean cakes ($10) are reminiscent of Nigerian moi moi, only made with smooshed black beans instead of blackeyed peas, and delicately seasoned with sweet spices. They are excellent. Another dish from Nigeria, this time from the northern reaches, are the peanut-encrusted brochettes known as suya, representing the Muslim influence on West African cooking. These are less successfully evoked, since the meat arrives off-skewer and mired in a sticky morass of nuts, currants, and dried apricots, somewhat reminiscent of Samuelsson's bar snack known simply as "nuts." 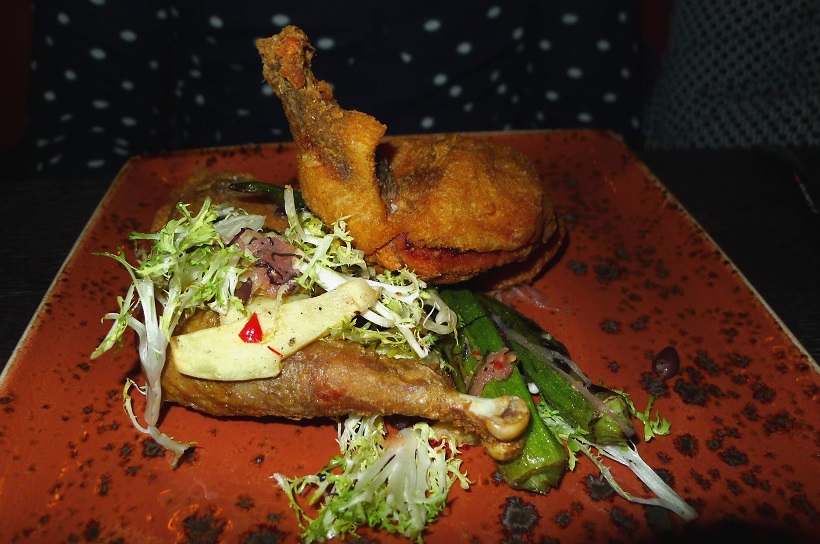 If the Low Country were located in Sicily, "spicy crispy ginger squid" ($14) might be its signature dish, a counterintuitive pairing of calamari and okra, fried in a Japanese-influenced batter. Indeed, frying is the forte of The Cecil, as seen in a breaded and fried Guinea hen that substitutes the game bird for the usual chicken ($27), accompanied by charred okra, roasted sweet potatoes, and chicory. Indeed, the omnipresence of okra is a notable feature of the menu, including a fried okra side that diners at my table avidly demolished in short order, wondering, where had the slime gone? 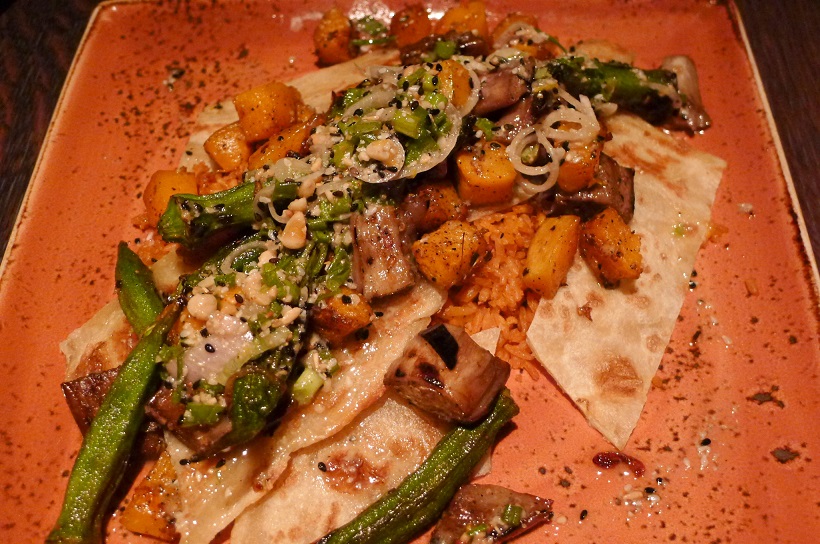 The menu includes another wonderful dish for vegetarians besides the bean cakes, an interpretation of Trinidadian (and Jamaican) roti that features a "bust up shot" of torn flatbread with a trio of roasted vegetables in a light, sweet glaze (yes, one of the veggies is okra). 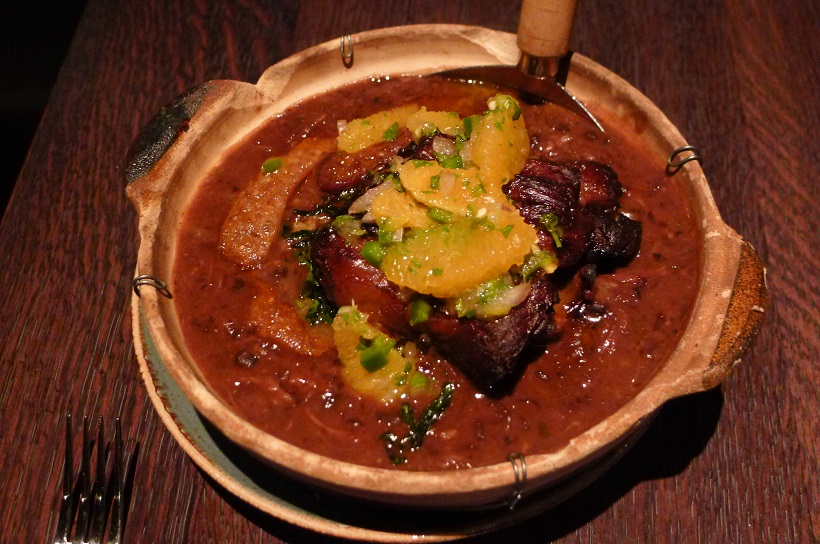 The Brazilian classic feijoada, more Portuguese than African — though it's also the national dish of Guinea-Bissau on Africa's west coast — is here rendered in one pot form ($40), featuring a shifting catalog of meats stewed with two kinds of beans. When I tried it last evening, the meats were lamb shank and some slender, mild sausages of indeterminate composition. The standard accompaniment of shredded kale and orange slices were mixed in, but the toasted manioc meal, farofa, was entirely absent. Still, this two-person dish was magnificently executed. 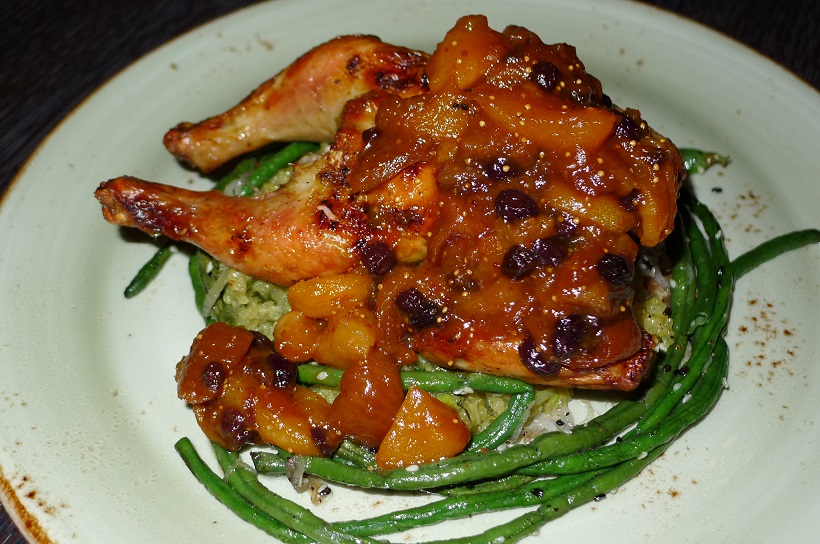 [The chicken yassa]
And speaking of greens, Smalls established a reputation at Café Beulah for undercooking them. At The Cecil he outdoes himself by offering a raw collard salad that you'd never see in the Low Country, but is quite delicious. There is a Senegalese dish here, a chicken yassa made with a diminutive poussin rather than the usual stewing bird. It is as tender as a mother's kiss, but instead of the usual mustard and caramelized onions (showing the French influence on Senegalese cooking), Smalls smothers the dish in a dried fruit combo not unlike the one found in his suya. This is a mistake, since there are Senegalese restaurants nearby where the actual article can be found. 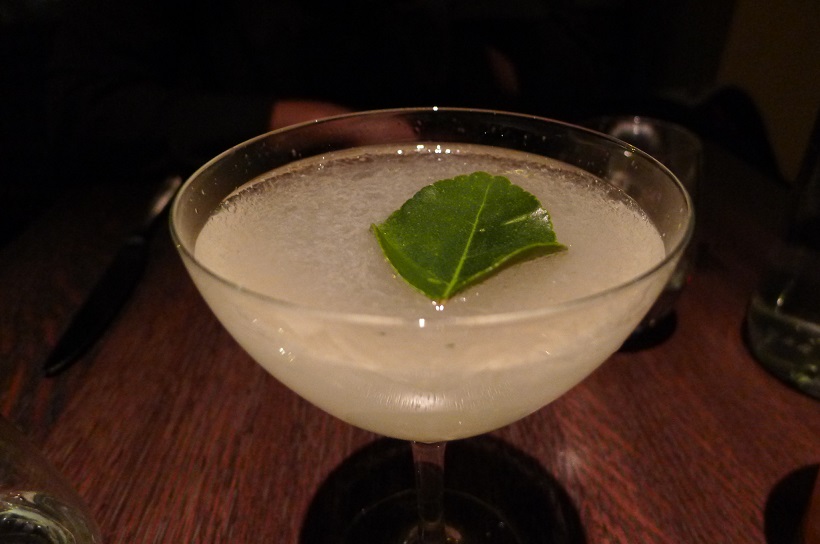 [The kaffir lime daiquiri]
Still, as a first exposure to African, Trinidadian, and Brazilian fare — before you dive into the real thing — and also as a place featuring strong cocktails like the wonderful kaffir lime daiquiri ($13), The Cecil is certainly worth a visit.