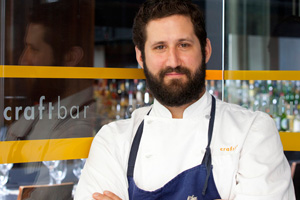 Five years ago, Shane McBride, who's now executive chef at Balthazar, Damon Wise, who's the chef at Lafayette, Adam Evans, who's a chef down in Atlanta at the Optimist, a bunch of us who all worked at Craft together went down there in kind of a Craft-sponsored trip the first time around--everyone's gone their own separate ways, but we make it a point to go down every year. That's our sojourn into barbecue and our chance to all get back together...The second year nobody wanted to do wings, so I took it under my belt. I made a hot sauce and a rub the day before I drove down, but I had worked six doubles in a row to get the time off, and I was so blurry that I don't really know what was in it. The joke is that I won first place and we don't know what's in it. 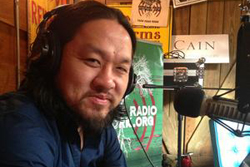 I was sitting at Marc [Forgione's] restaurant, just hanging out, unemployed, not knowing what I wanted to do with my career. I would come to Marc for advice just saying 'what's my next step? Can I go be a chef for somebody else?' And we both looked at each other and were like let's just open something up…At some point I lived with Nick, my business partner, and then I was roommates with Marc, so they got to all try my food when they were living with me, so they loved it. 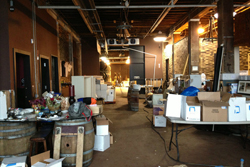 3) One Year After Sandy in Red Hook: Cheesemonger Anne Saxelby and Mark Snyder and Christopher Nicolson of Red Hook Winery appeared on "The Morning After" to talk about their progress after Hurricane Sandy. Here's Nicolson on the wine they lost:

The first thing that was on my mind was, the bay is going to taste a little bit better. That low-pH wine is going to help acidify the bay a little bit, it's going to be pretty and smell nice. The wine that we lost, that was a lot of head-hanging and tear weeping. That said, it was a huge help when Abe Schoener, who is one of the senior consulting winemakers on the project, he got there as soon as he could. And he really helped us put together a plan for salvaging as much of the wines as we could. Just salvaging parts of them was really meaningful emotionally; just to have records of this vintage. 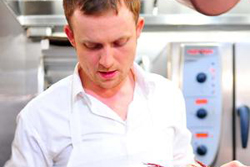 It's never been about money for me, but it's important to be smart as a chef. You have to understand the economics of a restaurant. But for us, what we make goes back into the business. This Saison, as a restaurant, it's not the only thing that I'll ever do, but it's also not designed as a business, it's designed as a place to produce a high-quality product for people who can truly enjoy themselves. 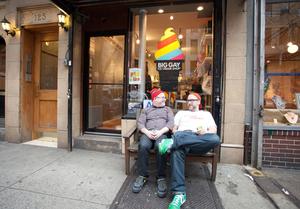 I think the reason we jumped into it so blindly was that we didn't know anything about the business. And had we known about the business, we may have been a little more hesitant. We didn't have food background or restaurant experience, and having known what we know now, what it takes to deal with the crap on a day-to-day basis, it's not something that people know about.