Tales of a Barfly Uncle From Hillside's Bill Fitch

Share All sharing options for: Tales of a Barfly Uncle From Hillside's Bill Fitch

All throughout Cocktail Week, bartenders and spirits professionals will be sharing their weirdest bar stories. Up now: Bill Fitch: 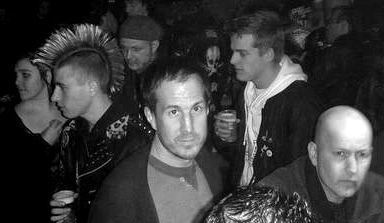 Bill Fitch, wine director of Vinegar Hill House and Hillside: Basically my Uncle Tommy ("U.T.", as we call him, for short, "Utius Maximus," for long), before he got sober, was the living embodiment of a weird bar story. After a hellacious stint in military school in the '60, he became a citizen of the world, in Theodor Adorno's sense when he writes that "home" is the state of having escaped. Specifically, U.T. made his home in the Irish Pubs of the world, or in the Irish-ish pubs that, who knew?, are pretty much everywhere on the planet, from Sarajevo to Sarawak.

My uncle never had to work a day in his life, which made it possible for him to obey Baudelaire's exhortation to stay constantly intoxicated. He doesn't even remember how he came to inhabit his Yorkville apartment where he lets me live for free in the basement. But it was sometime around 1970, back when Yorkville, believe it or not, was cool. The family knew not to call this theoretical residence if they needed to speak to him, but they could call The Mad Hatter on Second Avenue, and if he wasn't there, he either would be soon or was abroad.

Other New York haunts of his, besides every last Irish pub, included J.G. Melon, Bayard's (which became Jonathan Waxman's Jams), and Café Des Artistes. He was also a charter member of the legendary Plato's Retreat, the Studio 54 of badass sex clubs.

My uncle did once flirt with employment. When a bartender at The Mad Hatter didn't show up one day, Utius, in a not so rare delirium, volunteered for the position. Some time passed—a week, three weeks?—and from his barstool he noticed an unfamiliar face. "Did you fire me?" he asked the owner, who responded, "I didn't fookin fire ya. I fookin hired someone to do your fookin job."

Decades later, when I would be walking home to the bunker in his apartment after my barshift at L'Absinthe on 67th street, I would see him half waltzing half stumbling all over various sidewalks, exchanging chortles and snippets of show tunes with who knows what figments of his imagination, seraphim, it seemed to me, wingèd baby heads.

Once while I was filling in at the bar at Il Buco in the late '90s on a Saturday night, he threw open the winter curtain and shouted, "Nephew!" but the din of the moshpit mercifully muted his outburst so that only I really noticed, writhing in the fear that he would cause a disturbance. Cosmically lucky as usual, he grabbed a bar seat as a couple went to a table, and I gave him a beer before rushing to the cellar to fetch someone's inky Super-Calabrian.

Resurfacing I heard a thump. The moshpit parted and the din diminished briefly, and I saw him flat on his back, frozen in the morbid delectation of anguish, looking up into the nonplussed gaze of VIP and former Texas governor Ann Richards who kindly asked him if he was okay and said that as far as she was concerned he could lie there as long as he liked.