Share All sharing options for: A First Look at Three New Barbecues

Taken together, Manhattan, Brooklyn, and Queens have a great collection of barbecues, mainly Texas-style places with nods to Memphis, Kansas City, and the Carolinas. Earlier this year, we even managed to impress Daniel Vaughn, barbecue editor of Texas Monthly magazine. Reacting to my boast that New York had become one of the country's barbecue capitals, he arrived here last May for an intensive tour of recently opened spots — four barbecues in three boroughs by subway in under seven hours – plus pie and cocktails along the way. Vaughn pronounced Delaney's Barbecue and Mighty Quinn's as pretty decent by Texas standards, a giant concession on his part.

Now, inevitably, more barbecues are popping up as New York's BBQ craze continues. This phenomenon traces its roots to Robert Pearson's legendary Stick to Your Ribs, founded early in the '90s near the Queens mouth of the Midtown Tunnel. Others followed in slow, and then more rapid, succession, the best emphasizing smoke over sauce in the same manner. Our three most recent debuts: Hometown in Red Hook, Morgans in Prospect Heights, and City Rib in Jamaica. Here are my first impressions. 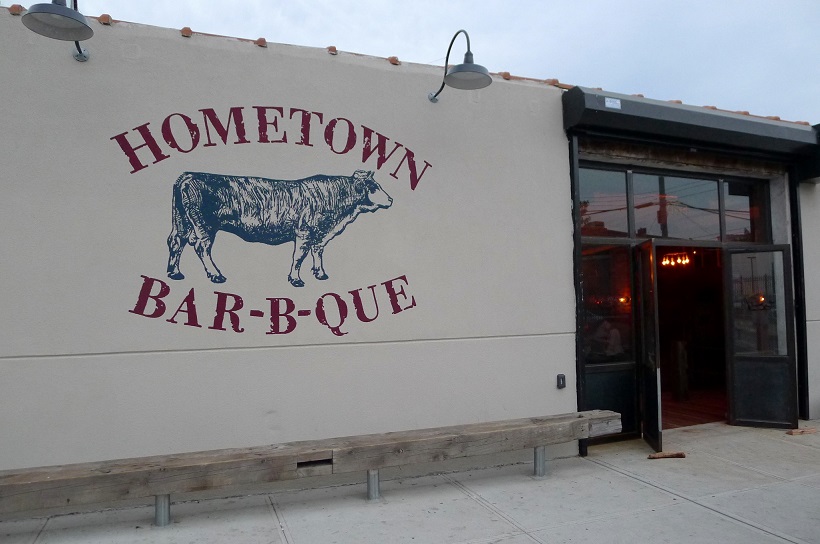 Hometown Bar-B-Que flew in with great promise. Pitmaster Bill Durney, a Brooklynite and former bodyguard, studied under Wayne Mueller of Louie Mueller Barbecue in Taylor, Texas, one of the state's most celebrated pits. He long-smokes his barbecue mainly over oak, "with a little cherrywood added to finish," noted one of his assistants as I stepped up last Thursday evening to the counter of the giant antique warehouse space, nicely channeling Texas barbecues in small towns like Elgin and Lockhart – even though it looks across at a Fairway supermarket. 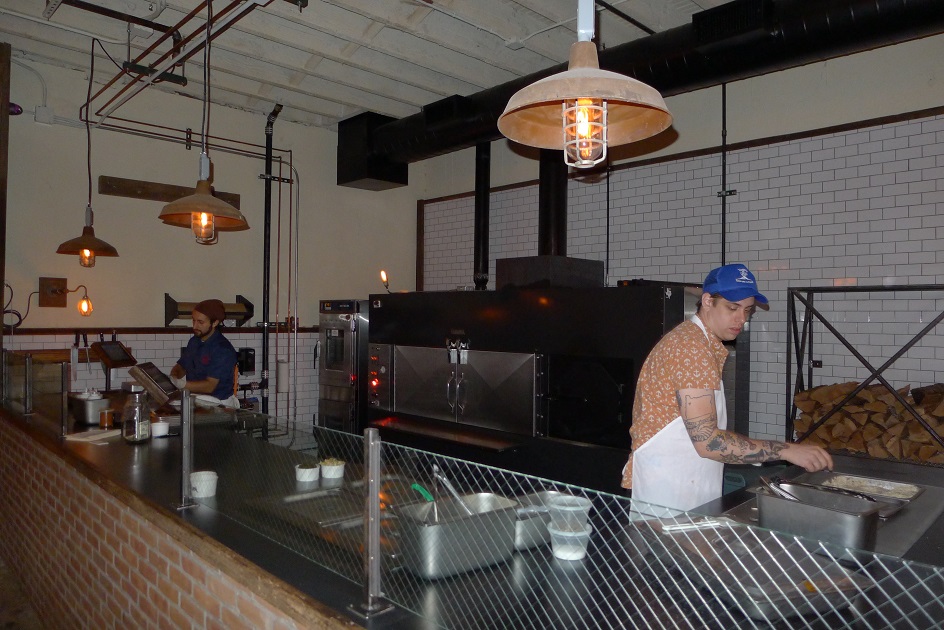 The room smells nicely of smoke; a couple of wood stacks serve as decoration, and meats available that day are printed on brown paper with felt-tip marker and posted here and there. A bar runs along one wall, dispensing beers and mixed drinks. I ordered sliced brisket and a beef rib ($25 and $21 per pound, respectively), the second fairly large, but not nearly as massive as the one offered at Mighty Quinn's. The meats had been smoked for 14 hours to 16 hours. The brisket was entirely respectable, thickly pepper-crusted and smoky but not overly so. The rib flaunted a concentrated flavor, with the fat clinging to the meat displaying a jellied texture due to long smoking. Exploring the rib was big fun, pulling off alternate strips of fat and dense, oily meat. 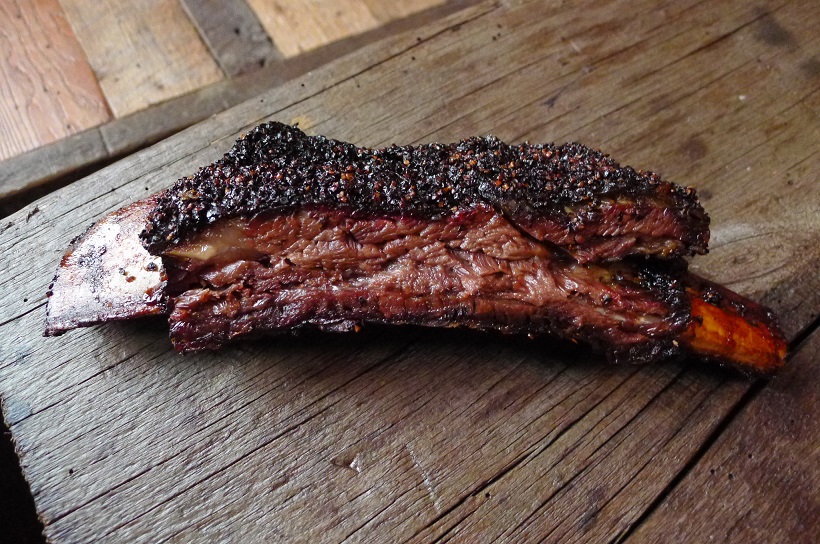 I tried to order some "half hog," which is Hometown's idiosyncratic name for pulled pork. There wasn't any that day, though it would have gone really good with a little coleslaw on top and a dab of the South-Carolina style mustard-based barbecue sauce, one of three available around the room in squirt bottles. I couldn't have made a sandwich, though, since the place didn't have any bread or rolls to offer, which is just plain weird. Nor did it have any pickles, raw onions, or jalapenos, which are standard Texas accompaniments. The other sauces: a sticky red tomato-based sauce, and a North Carolina-style vinegar wash. While I won't use sauce on my Texas barbecue, I've been known to use it with Carolina 'cue. 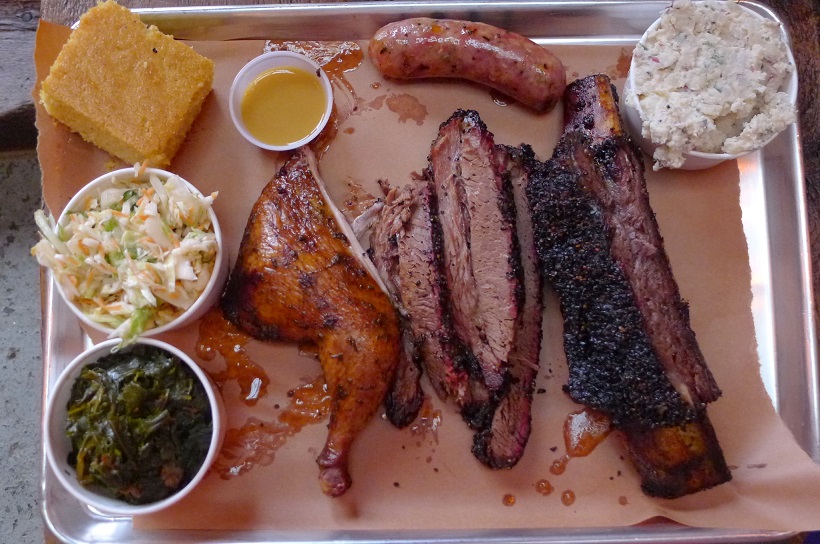 Instead, my friend and I had a jalapeno-and-cheese sausage. The guy at the counter told me it was beef, but it sure tasted like pork, big and slippery. He also told me it was made by 45-year-old Paisanos Meat Market on nearby Smith Street. Which makes the assertion that the sausage is made with beef even more suspicious. Still, it was good, and unlike any other barbecued sausage I've ever tasted. Score one for Hometown! Equally cryptic was the so-called jerk chicken. It was a pleasant shade of mahogany brown, with smoky flesh and a near-crisp skin. It certainly didn't taste like allspice – the main component of jerk marinades, pastes, and rubs – and had a pronounced herbal flavor. Could it have been mint? That idea was so outlandish, I tried to forget it, but the impression continued with every bite. Not bad, but I wouldn't get it again.

The sides ($4 large, $6 larger) were better than they needed to be, with good mustardy potato salad, mushy as it often is at Texas barbecues; a great mayo-based cole slaw, just soupy enough to please; decent cornbread sold by the $3 square; and collard greens cooked with homemade bacon (and a little honey?) that left my companion and me unimpressed.

The place is huge, but by the time we walked by again around 9 after a drink at Brooklyn Crab and a visit to the Waterfront Museum, half the tables were occupied and the bar was booming. Hopefully, the place will survive – though it's undoubtedly in competition with the more streamlined and diverse Fletcher's near the Gowanus Canal. Hometown Bar B-Que. 454 Van Brunt St, Red Hook, Brooklyn; 347-294-4644. 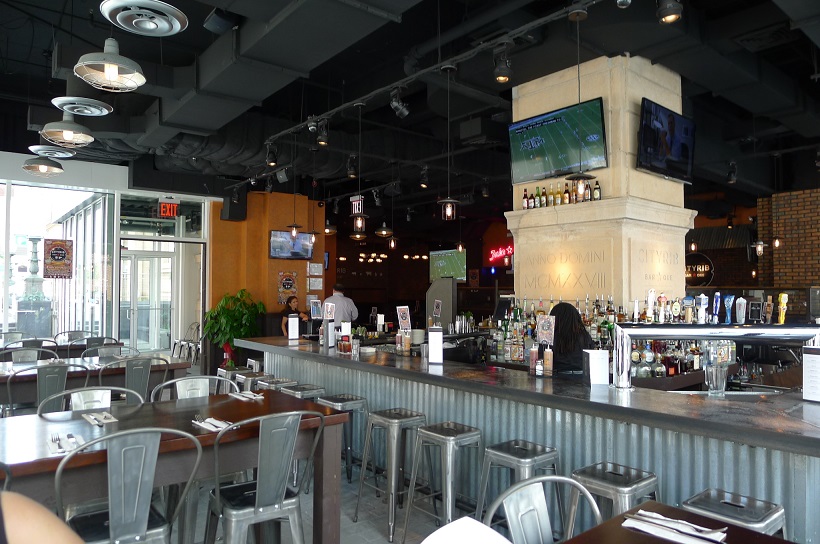 City Rib opened in July in the Moda Building just north of downtown Jamaica, a shiny 12-story apartment tower on Parsons Boulevard out of place among the discount markets, stately older apartment buildings, and ancient church spires of the area. With 200 seats, a giant bar in the front window featuring columns from an old courthouse, and multiple TV monitors up near the ceiling tuned to sporting events, the place was like a bucket of ice water thrown in the face of the neighborhood, where denizens were of mixed opinions as to the potential longevity of the spot. A piece in the Daily News noted that, besides Applebee's, it was the area's only sit-down restaurant – obviously discounting the myriad Caribbean and Central American cafes to be found nearby.

I entered with a couple of friends not long ago on a Saturday afternoon and noted that the place didn't smell like smoke. It was also mainly empty. Where were the upscale shoppers and sports fans? Sitting at a raised bar table with metal stools – with views of a Guatemalan tented market at a church across the street — a sense of unreality prevailed. We ordered carefully, since we hoped to eat lots more that afternoon. 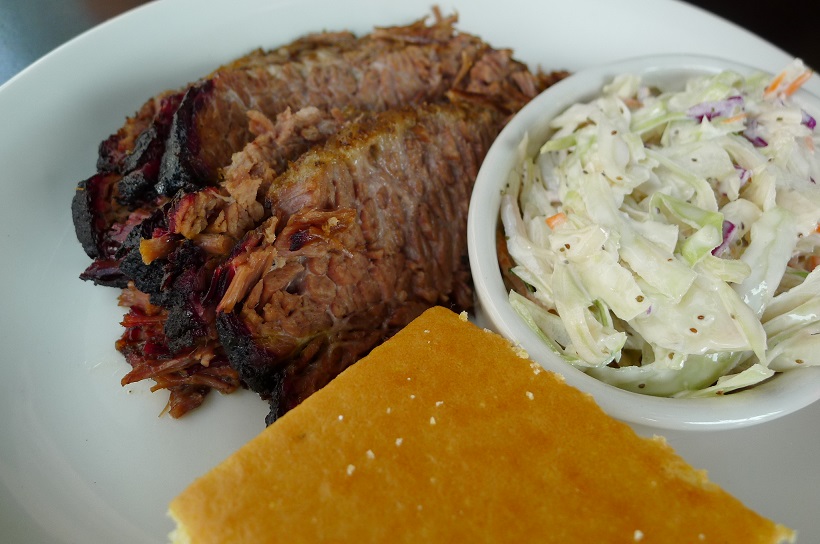 The brisket arrived thickly sliced ($16, with two sides). It was nicely marbled with fat and had obviously been really smoked, though at some point in the past, since it tasted as if it had been reheated, possibly in a microwave. 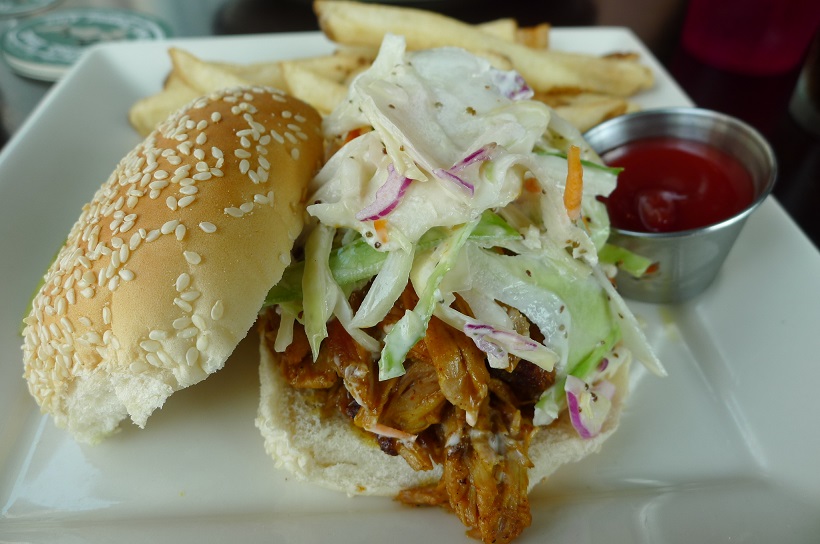 Much better was a pulled pork sandwich ($11), perfectly turned out with the slaw piled on top of the meat in a hamburger bun. This is about as authentic as Carolina barbecue gets in the city. The fries were just OK. But I'd go back for that sandwich. The menu is all over the place, also featuring burgers, fried chicken and waffles, and catfish and grilled chicken-breast sandwiches. City Rib. 89-04 Parsons Blvd, Jamaica, Queens; 718-878-3599

When I first exited the 3 train and strolled uphill to Morgans BBQ, my jaw dropped. Never has a Brooklyn restaurant so channeled the Austin vibe: the melding of outdoors and indoors into a single seamless entity, a certain rough-hewn insouciance on the part of the staff, and the smell of hardwood smoke drifting through the warm evening air. You might as well be on South Congress or South Lamar. The tables on the sidewalk are herded inside a wooden corral, and in the center sits pitmaster John Avila, rocking and looking out over Flatbush Avenue as if it were the Pedernales River. He and his new barbecue get their ideas directly from Austin, practicing the sort of hyperintensive smoking we've seen here on the part of Delaney and Mangum. Avila actually studied with Austin barbecue guru Aaron Franklin, who started out in a trailer, then moved into a building under I-35 on the edge of East Austin. 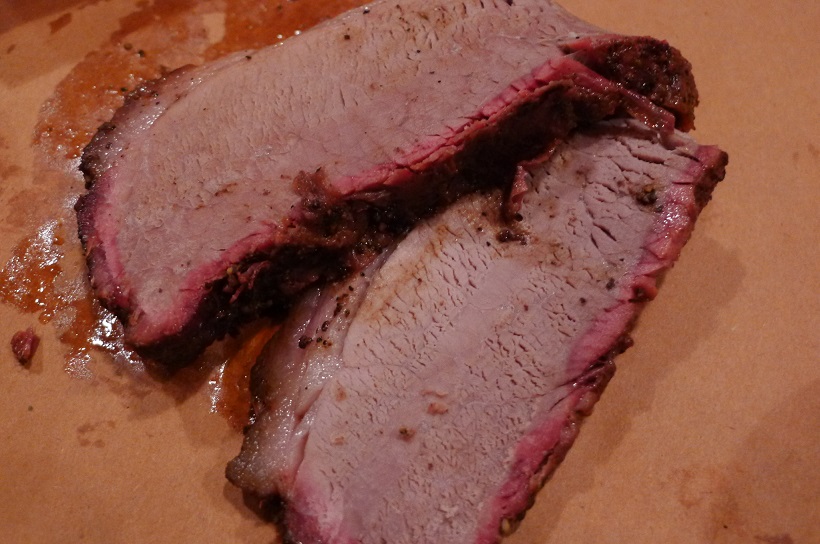 Avila smokes his brisket 16 to 18 hours over oak, and it has that intensely smoky flavor we associate with Franklin. My serving was slightly on the dry side, but the rim of fat more than made up for it. (I'm assuming that most people reading this prefer their brisket a bit on the lean side, anyway.) The pulled pork was the biggest surprise, so juicy and smoky – with little dots of the surface caramelization sometimes referred to as "Mr. Brown" around Lexington, the piedmont barbecue capital of North Carolina. The next best thing at Morgans was an amazing beef sausage, firm in its casing and slashed with a knife to facilitate smoking, dotted with jalapenos. It was made, according to Avila, at Esposito & Son's Pork Store on Court Street. 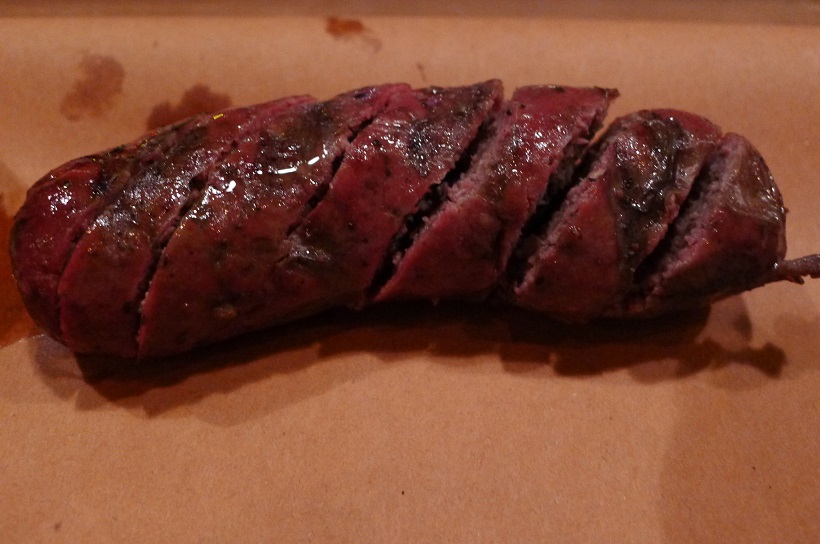 Turkey is something you find sporadically at Texas barbecues, so it's not surprising it shows up on Morgans menu. Like all turkey, the sliced meat is a little too dry and doesn't have enough fat to absorb much smoke. Yet there is a mild subtlety to it that might make an excellent sandwich. Another pleasant shock was the Texas chili, which comes in a paper container sprinkled with sour cream, cheddar, and green onions. Jesus, it's good! Beanless, it has a thick chile gravy and the beef is cut in ragged shards. This is real chili con carne, a Tex-Mex standard very rare in NYC. I tried to get a beef rib, which is smoked "five to seven hours" according to the pitmaster, but none were available this last Saturday evening. In Austin, beef rib is the new brisket.

You don't get any bread unless you ask for it, then sliced white bread (the best kind for barbecue) is provided. Contrary to Texas practice, there are no dill pickles, sliced raw onions, or pickled jalapenos. The meats are available in quarter-pound increments, ranging in price from $12 to $22 per pound – which ain't bad for barbecue here – with the higher price for fatty brisket and the lower for turkey tails (they were out of those, too, or of course I would have tried them). 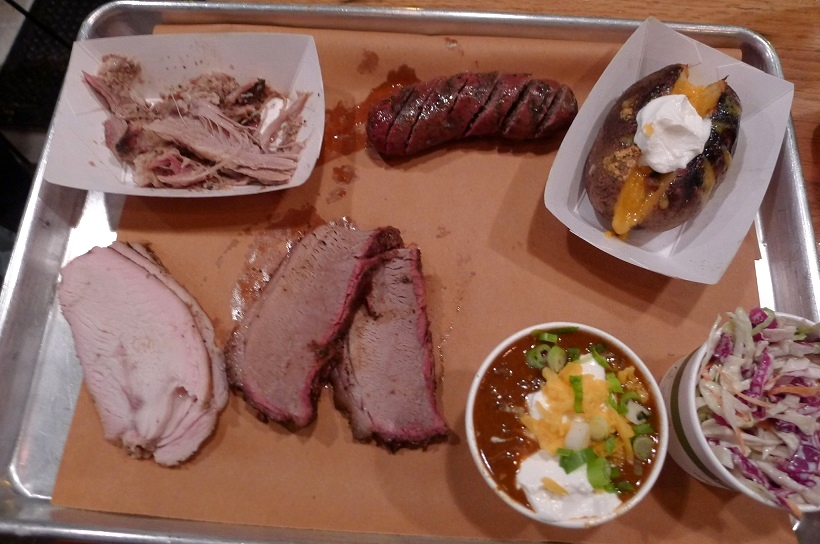 There's plenty of stuff on the menu I'm interested in but haven't tried yet, including the pulled pork and chopped beef sandwiches, brisket and pulled-pork tacos, something called "casserole," and the bourbon pecan pie. I tried the baked potato (which may also be had stuffed with brisket, not a bad idea), and it was just OK. Still, despite the din, this place is a major contribution to the city's catalog of great barbecues. Hometown is formidable, too, but I slightly prefer Morgans – so far. Morgans. 267 Flatbush Ave, Prospect Heights, Brooklyn; 718-622-2224.