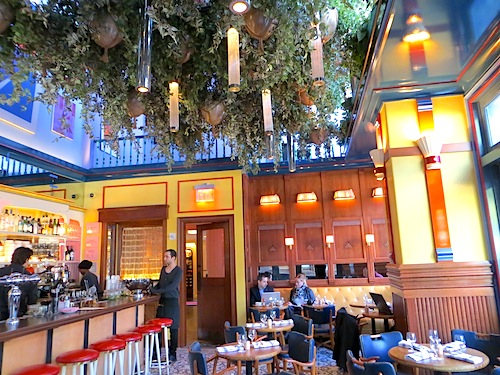 After what seems like an eternity, Ed Schoenfeld and Joe Ng will finally open the Upper West Side location of their West Village hit Red Farm this afternoon. Ed and Joe moved into the space that housed Fatty Crab last fall, and they've been steadily working to turn it into Red Farm 2.0 ever since. As Schoenfeld explains on Twitter, the restaurant will open for lunch today, with dinner starting later this month. In the past he's promised that the new outpost will feature dishes that are not offered downtown.

[A sneak peek at the space via @gaelgreene]

Eddie Glasses previously hinted that Red Farm UWS might serve Hello Kitty dumplings instead of Pac Man dumplings — so the kiddoes have something to get excited about — but expect several new entrees too. The space will have the same rustic farmhouse aesthetic as the downtown location, but expect more booths, a dining counter area in the back, and a generally airier vibe all around.

Stay tuned for more information on the biggest Upper West Side Chinese restaurant opening of the new millennium, and if you make it in there this weekend, please send any early reports our way.