As a Cocktail Week special, here's a look back at Trader Vic's, a splashy Midtown tiki bar that delighted New Yorkers for over three decades: 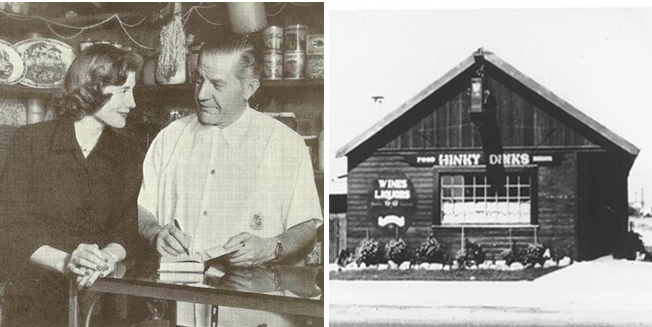 In 1934, a budding 32-year-old restaurateur named Victor Jules Bergeron, Jr. opened Hinky Dink's, a tiny "beer and beans parlor" across the street from his family's grocery store in Oakland, California. Over the course of three years, Hinky Dink's morphed into a Polynesian-themed bar with potent rum-based cocktails and a menu of pseudo-Chinese food.

This revamp was partly inspired by a visit Bergeron paid to Don the Beachcomber, a popular South Seas-inspired bar in Hollywood. Bergeron described his first visit to Don the Beachcomber: "I felt I could do it better. I had never been out of the country but I ate in Chinese restaurants every night." After traveling through the Caribbean for inspiration, Bergeron made some tweaks and changed the name of his bar to Trader Vic's.

[Trader Vic's Oakland postcard; Trader Vic's Oakland ad]
The bar was a massive hit. Over the next two decades, Bergeron expanded Trader Vic's to Seattle, San Francisco, Beverly Hills, Chicago, and Hawaii. And in 1958, the restaurateur opened a location of his bar in the Savoy-Plaza, a luxury hotel on Fifth Avenue and 58th Street.

[The original New York location of Trader Vic's in the Savoy-Plaza. Postcards via TikiCentral/Dustycajun]
Like all the other branches around the globe, the New York location of Trader Vic's had clam shell lights, war clubs, carved masks, and Japanese fishing floats hanging from the ceilings, which were covered with wooden palm leaves. The food menu was a mix of inauthentic Chinese and Indonesian fare, plus a few American and European dishes, and the beverage list was full of potent rum-based concoctions.

[A menu from the Plaza Hotel location of Trader Vic's, via Ebay]
Bergeron is credited with inventing the Mai Tai, a mixture of light and dark rum, orange Curaçao, Orgeat syrup, and lime juice. After adding this to the Trader Vic's menu in 1944, versions of this drink quickly started popping up on cocktail lists around the country. Other big-name cocktail gurus, including Bergeron's friendly rival Don the Beachcomber, also claimed to have invented the drink. But in the late '70s, Bergeron told the Times: "There has been a lot of conversation over the beginning of the Mai Tai, and I want to get the record straight — I originated the Mai Tai. Anybody who says I didn't create this drink is a real stinker."

[The Tader Vic's menu from the Plaza, please click here to zoom in big. Published with permission from the New York Public Library Menu Archives]

Other popular rum-based drinks included the Samoan Fog Cutter, Zombie, Suffering Bastard, Navg Grog, and Doctor Funk of Tahiti. Guests could also order cocktails for two and four people, like the Rum Keg, Kava Bowl, Scorpion, and Trader Vic's Rum Cup. One page of the cocktail menu had a message from Bergeron: "It is my pleasure to offer you these drinks. Some I have gathered at their origin and others are my own concoctions." 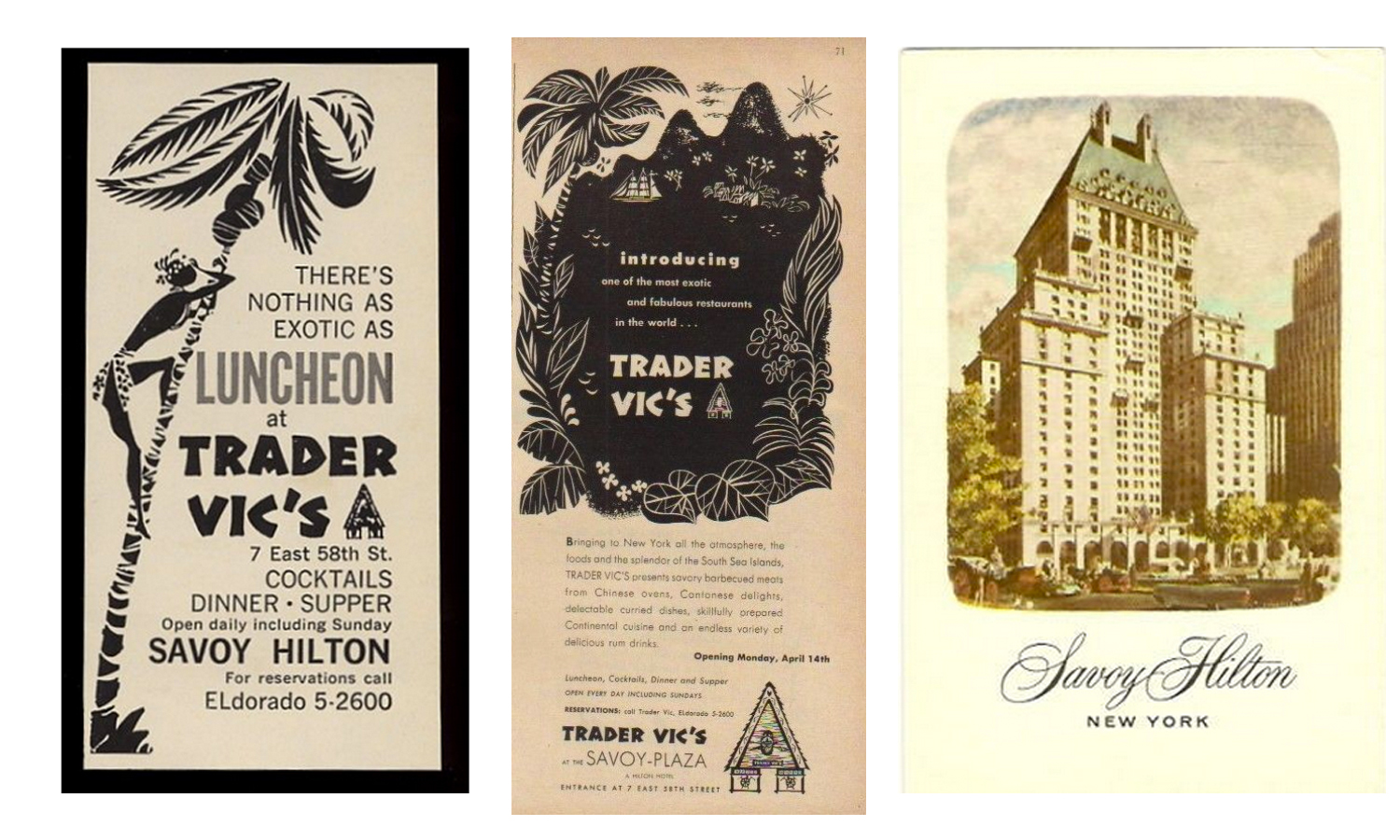 [Trader Vic's at the Savoy Ad; Savoy-Plaza Ad Two; Postcard for the Savoy-Plaza]
Although the service was shaky on one of his visits, New York Times critic Craig Claiborne loved the food at Trader Vic's:

As a main course, a specialty known as Mandarin Kau Kau and barbecued filet of beef were chosen. The first dish consisted of an assortment of items, such as fried rice, bits of pineapple, pork and tomato in a sweet-sour sauce and asparagus. The asparagus was cut diagonally into wafer thin slices and cooked briefly in the Oriental style. This fare was highly palatable.

The barbecued beef was outstanding in both tenderness and flavor. It was obviously cooked in one of the special Chinese ovens that are a feature of the new restaurant. A delicate smoke flavor was apparent.

Claiborne tried the Doctor Funk of Tahiti, but he did not comment on whether or not he enjoyed the drink. He did note, however, that, "One may choose a fairly decent Bordeaux table wine for as little as $2.50." 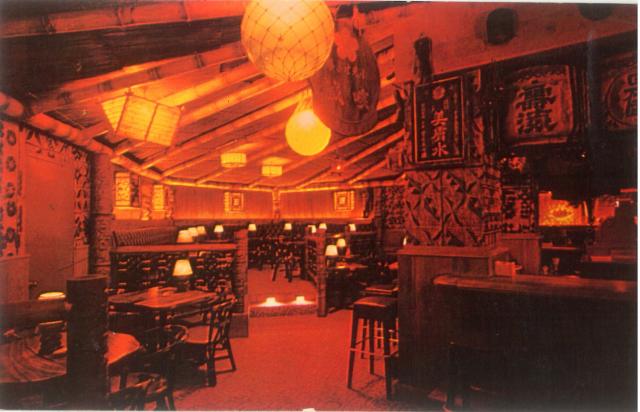 [Trader Vic's at the Plaza via Tiki Central/Donhonyc]

When the Savoy-Plaza closed in 1965 to make way for the General Motors Building, Trader Vic's moved across the street to the basement of The Plaza Hotel. The design and menus were similar to the original New York location, and the restaurant now had an entrance right on West 59th Street, facing Central Park. In the lobby, guests were also treated to the sight of an outrigger canoe used in the Marlon Brando film Mutiny on the Bounty. 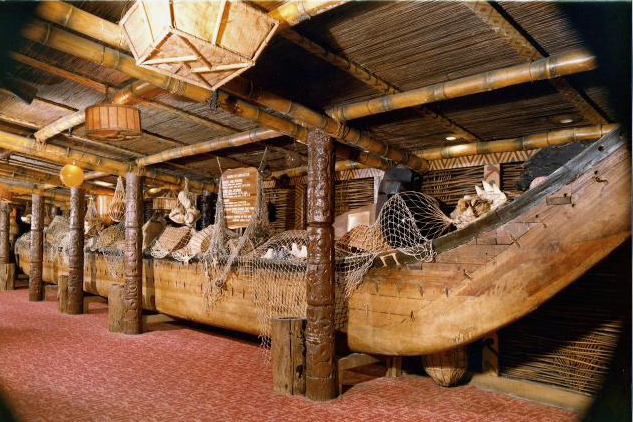 [The Outrigger Canoe via Tiki Central/Dustycajun]

During its heyday in the late '60s and early '70s, Trader Vic's was a popular hangout for prep school kids and their parents. In 2005, entrainment writer Nikki Finke remembered her experiences at Trader Vic's:

When I was growing up, my gang's local diner was Trader Vic's at the Plaza. A typical evening out meant going to the Paris Theater, across 58th Street, to see an art movie and then inside the hotel for a pu pu platter. (It would be years before I realized that most films didn't have subtitles, or that this restaurant served entrees.) I can attest that Trader Vic's was the ideal setting for a first date between two sophisticated teenagers. There was so much loopy Polynesian tiki décor to make fun of that we never ran out of conversation.

The restaurant hummed along in the basement of The Plaza through the '70s and '80s, losing some of its luster with each passing year. 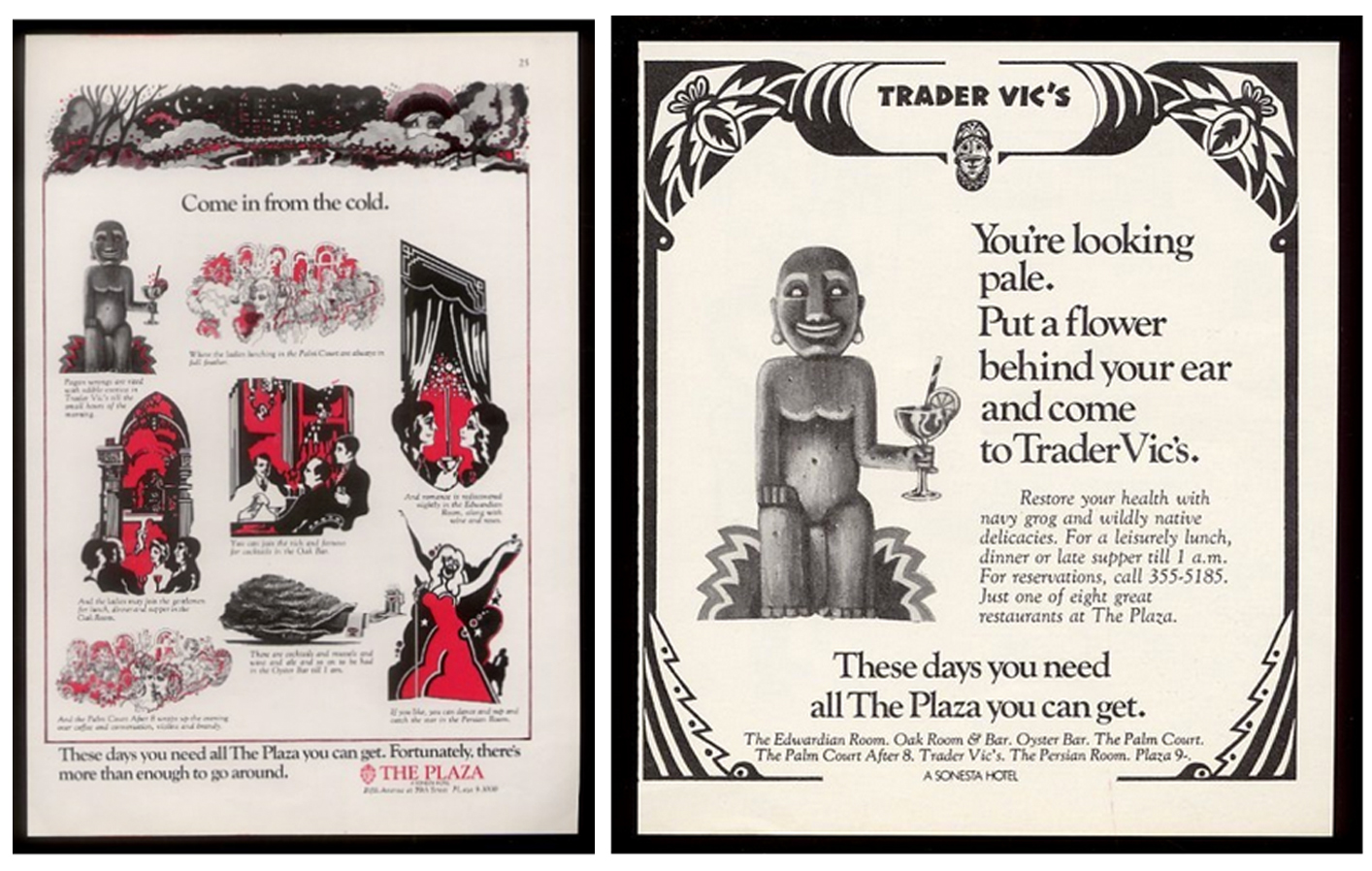 In 1982, Gael Greene filed a report from a revisit:

Trader Vic's played to our Polynesian fantasies. Wasn't there a time when its dim nooks and rum-drenched Molotov cocktails made deep-fried island tidbits seem delightful? Or was I ever that innocent? Does anyone know or care that Trader Vic's still exists, duskily dim, in the netherworld of The Plaza? Stopping by on evening for a seance with passed memories, it was a shock to discover that the house had no gardenias to float in our Scorpion...no bowl in which to serve this volatile brew ($16.50 for four)...wait, farwell-to-the-sinking chip confession: no pen to sign the check. "We're out of pens," the waitress confided, and borrowed mine.

Victor Bergeron Jr. passed away in 1984 at the age of 81. He published eight books in his lifetime, and operated 27 restaurants around the globe. Seven years later, Donald Trump purchased The Plaza Hotel for $360 million, and decided to shutter Trader Vic's. Following the announcement, President Richard Nixon told the Times: "My entire family will be very sorry to see it close...It was always our daughters' favorite restaurant, and it quickly became mine too.'' Now the space beneath The Plaza houses Todd English's food court. 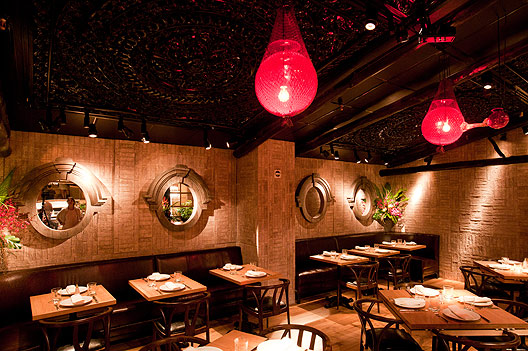 New York saw a slight tiki bar resurgence almost 30 years after the shuttering of Trader Vic's with the 2010 openings of Painkiller, Lani Kai, and The Hurricane Club. The first two restaurants closed after less than three years, and The Hurricane Club recently tweaked its menu and focus so that it's now a steakhouse with a Polynesian theme. Sam Sifton gave a nod to Vic's in his one star review of The Hurricane Club:

Remember Trader Vic's in the Plaza Hotel, all dark wood and sweet drinks, steel guitar and Polynesian dreams? Donald Trump closed the restaurant in 1993 when he bought the hotel, calling it "tacky," but it had 25 years under its grass skirt before that day. Trader Vic's served pu pu platters and mai tais to generations of New Yorkers delighted to dream of the South Pacific and all its naked, willing charms.

And in a post about the tiki bar resurgence of 2010, an Eater commenter shared this fond memory of the bar:

I used to go there in the '70s with a friend for after work cocktails. She preferred their Scorpion which had a real gardenia floating in it. (I think it was called a Scorpion, either way, the flower part is real.) Once, while we were waiting for a cab on CPS after a few, my friend's underwear fell off, right there in the street, with her arm up hailing a cab. She cooly said "Oops," picked them up, and off we went. Ah, the '70s.

For those that want a recreate a piece of the Trader Vic's experience at home, head to Brooks of Sheffield's blog Lost City for Bergeron's famous Mai Tai recipe.

Trader Vic's at The Plaza Hotel