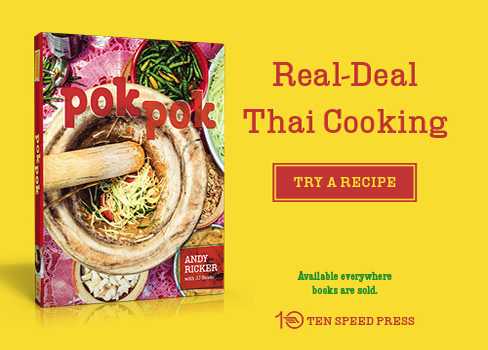 Andy Ricker—winner of the 2011 James Beard Award for Best Chef Northwest, and owner of the Pok Pok and Whiskey Soda Lounge restaurants—has released his first cookbook, Pok Pok. The book is a compilation of research and experiences garnered over nearly two decades of traveling throughout Thailand.

After returning stateside, Ricker wanted to share the country's famed cuisine with others and opened the first Pok Pok restaurant in Portland, Oregon in 2005. He has gone on to open six more restaurants and is now considered one of the leading American voices on Thai cooking.

With Pok Pok, Ricker brings readers classic Thai cooking playfully interwoven with stories from his travels, and profiles of the characters who taught him about the food and culture of Thailand. The book includes 70 recipes from Thailand and his Pok Pok restaurants.

Click here for a pair of those tasty recipes and a peek behind the cover. >>