See a new restaurant opening up in your neighborhood? Please do let us know. 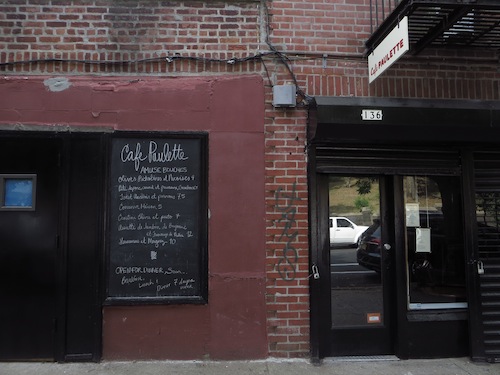 [All photos by Marguerite Preston]
1) Fort Greene: A little French cafe and wine bar called Cafe Paulette opened recently just across from Fort Greene Park. A tipster hears from owner that he owned two cafes in Paris before moving to Brooklyn, and the dinner menu is a list of classic bistro dishes like duck confit and pheasant pate. The restaurant plans to start serving breakfast and brunch soon. Status: Certified Open. 136 DeKalb Ave., 718-694-2044.

2) Financial District: Aussie-inspired coffee shop Bluestone Lane just opened a second location downtown. Flat whites, a favorite Australian espresso drink, are on the menu along with the usual coffee repertoire. There are also pastries from Balthazar and a few other snacks like avocado toast. Status: Certified Open. 30 Broad St. 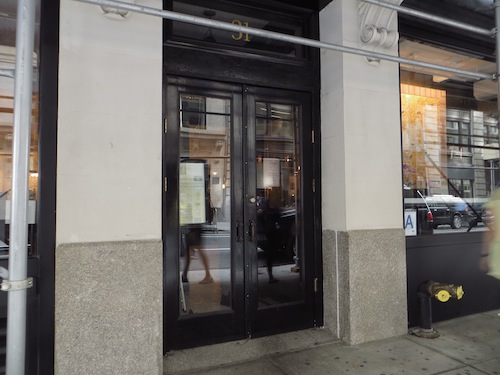 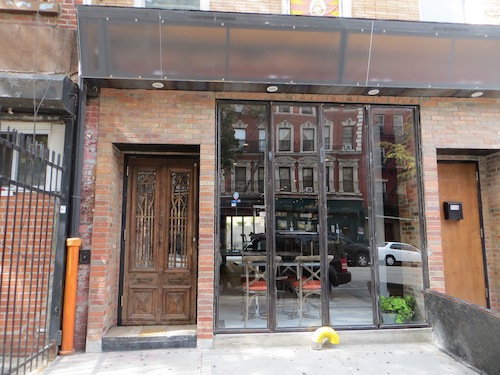 4) East Village: Chef John Keller of Dinner on Ludlow has opened APT-13, a small two-story restaurant on Avenue C. The menu is a mix of American, Carribean, and Japanese influences, with dishes that range from hamachi crudo to pork shank chicharron to a vegan version of papardelle bolognese. The restaurant also offers flights of oysters paired with beer, wine or various liquors from 5 to 8 p.m. on Tuesdays through Sundays. Status: Certified Open. 115 Loisaida Ave., (917) 475-1213.

6) Midtown: Clement opened in the Peninsula New York this week. It replaces the hotel's old restaurant, Fives, on the mezzanine level of the lobby. Chef Brandon Kida, formerly of Asiate and Lutece is cooking a seasonal American menu of dishes like lobster with kabocha squash and porcelet with apples, cabbage and chestnuts. Status: Certified Open. 700 Fifth Ave., 212-903-3918.

7) Upper East Side: A Manhattan outpost of Astoria's popular MexiBBQ just opened uptown. The menu of Mexican-influenced southern barbecue includes dishes like barbecued brisket tacos, and the restaurant also has 48 beers on tap. And while the weather's still warm, the restaurant has both a sidewalk patio and a backyard as well as the large indoor dining room. Status: Certified Open. 1633 Second Ave., 212-837-8285.

8) Greenwich Village: Beleaguered cupcake chain Crumbs just opened its first entirely gluten-free shop in the Village. The spot has actually been a regular Crumbs bakery since 2005, but as of today all the pastries there are baked in a completely gluten- and peanut-free kitchen. The selection of gluten-free cupcakes is a little more limited, but the shop also has quiches, bread, and various other tarts and cookies. Status: Certified Open. 37 E. 8th St., 212-673-1500.