A First Glimpse of Tacos Morelos in the East Village

Share All sharing options for: A First Glimpse of Tacos Morelos in the East Village

Six years ago, a dozen friends and I undertook a taco run down Roosevelt Avenue from Flushing Meadows to Woodside late one evening, eating every taco we could get our hands on at 32 establishments, ranging from brick-and-mortar restaurants to humble carts with no means of motorized propulsion. Best of all was a tiny cart called Tacos Morelos, where we observed one of two cooks patting handmade tortillas for every order. We were impressed, and the tacos were damn good, too. What really blew our minds was a special kind of taco called "placeros," meaning "of the market." These tacos featured surprising things like boiled eggs and freshly fried chiles relleno stuffed with a tombstone of white cheese. Each one also contained bright orange Mexican rice, which is not the sort of thing you expect to find in a taco, but a welcome addition, adding to the starchy luxuriance.

It turns out back home these tacos are a commonplace shoppers' snack, as the name implies, and several other versions have turned up in the city during the past six years. If nothing else, they demonstrate that not all Mexican tacos feature meat, meat, and more meat. Most notably tacos placeros reappeared at a restaurant version of Tacos Morelos that opened in East Elmhurst early last year, sporting a brightly painted bar and dining room, very campanero-chic, and serving alcohol (including shots of various tequilas), which is rare in a storefront taqueria that's trying to be a restaurant and not just a bar.

In addition to an expanded list of tacos placeros, the menu also listed several rare dishes that hail from Morelos, a small state southwest of Mexico City that apparently has amazing food. One thing was big chunks of fatty pork foundering in a red pipian mole, compounded of pumpkin seeds and dried red chiles, and presenting quite a contrast to standard green pipian moles. I've seen it nowhere else.

Soon the cart that had once sat on Roosevelt Avenue at 94th Street was abandoned, or rather put in front of the restaurant as a prop, and the place spun off two larger and more serious trucks that were bound for Williamsburg and Greenwich Village, respectively. Everyone who has tried both the Tacos Morelos trucks and the East Elmhurst restaurant agree that the mobile vehicles are far inferior in most regards. The trucks' taco placeros stuffed with rice and a chile relleno, for example, is made using a cold pepper pulled from the fridge only half-warmed on the griddle, while the version at the restaurant deploys a freshly fried one, the exterior crisp, the cheese inside all gooey.

Now Tacos Morelos has established a small satellite cafe just west of Tompkins Square. The dark interior is half-kitchen, with only four rustic tables heavily polyurethaned and made from heavy blocks of distressed wood. In fact, the furniture is so voluminous it dwarfs the humans frame and makes the room always seem crowded.

The food, however, is fully up to the standards of the East Elmhurst restaurant. This is partly because the original cooks from the café have been transferred here, and are they ever talented! Unfortunately, the entrees are about three or four dollars more expensive than their Queens counterparts, though a full meal comes with massive servings of yellow rice and black beans, and a basket of homemade tortillas. The menu is smaller than the original place (which remains open), with a series of entrees that hits some of the high points of southern Mexican cooking. 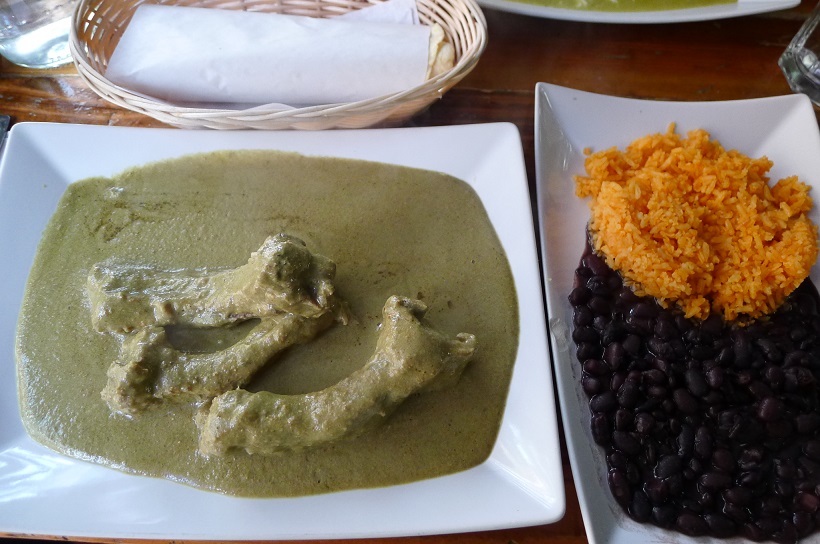 The green pumpkinseed sauce known as pipian is here rendered in a delightfully loamy fashion, and you can get it with pork ribs in addition to the usual chicken ($16.99). As with most moles, the meat seems completely beside the point as you spoon up the mole and eat it, dipping tortillas. 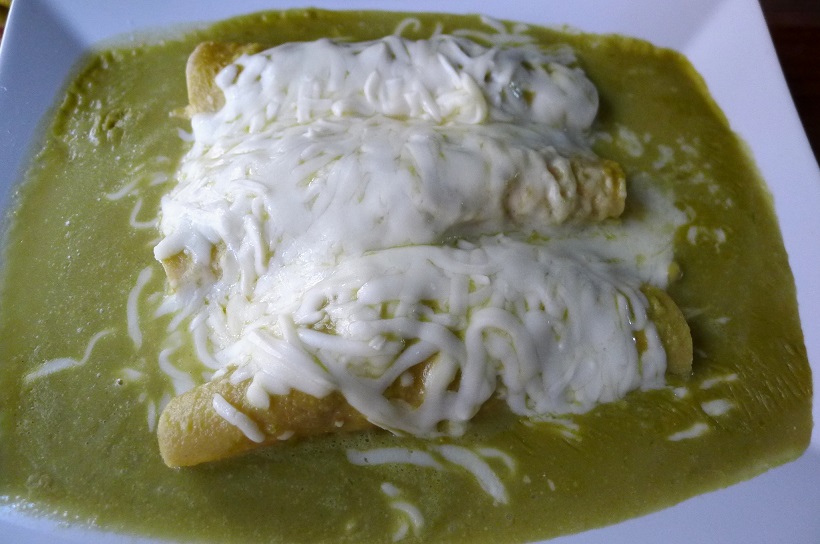 The enchiladas Suizas ("Swiss enchiladas," $12.99) are so-called because, unlike the usual Mexican enchilada topped with crumbled cheese and squiggles of crema, this one comes smothered in melted white cheese; from the Mexican perspective that makes it "Swiss," due to the enhanced dairy content. 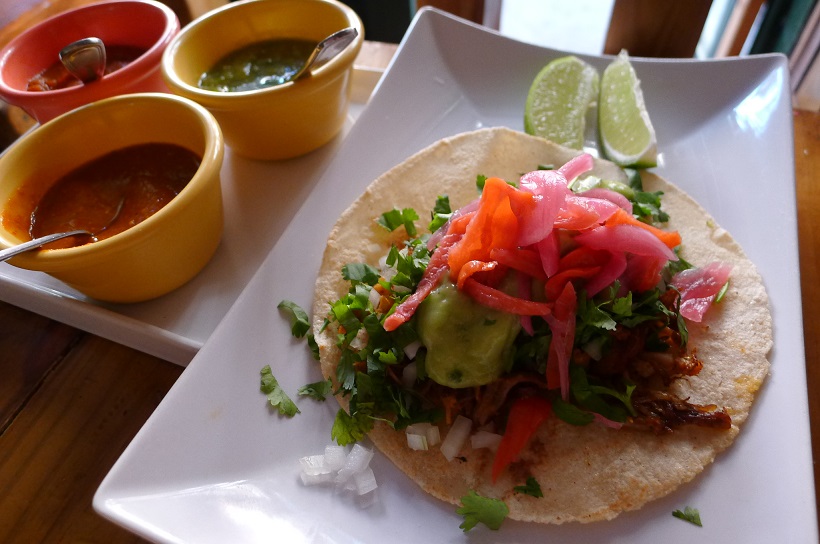 There are tacos made with handmade tortillas, or "from the bag" as the menu charmingly puts it ($2 each/$2.50 each). Many of the usual meats are available, including tongue, but omitting things that represent face parts or other cranial material. 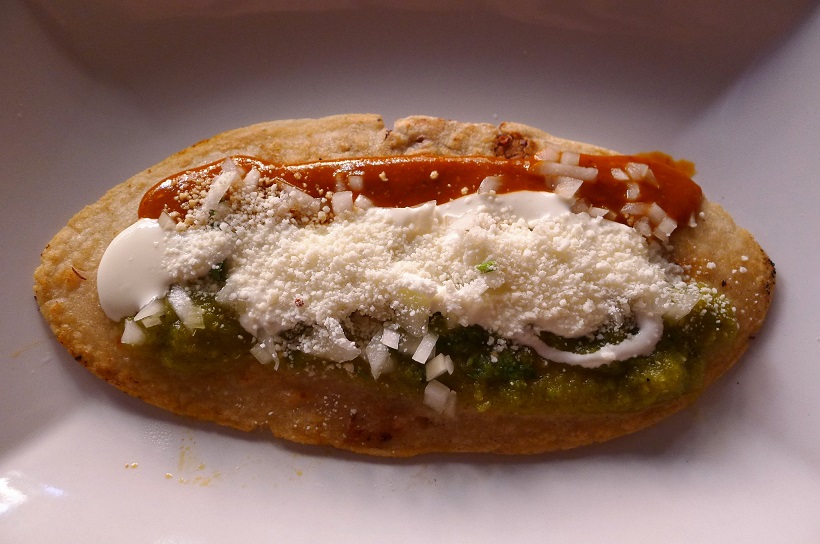 Heading in a bulk masa direction, you can get quesadillas, huaraches, and tlaycoyos, the last described as a Mexican pizza, but really more of an edible surfboard with a laminate of refried beans tucked between its layers, and red and green sauces and crumbled and squirted dairy material. At $3, it's one of the menu's best deals and would make a fine light lunch. 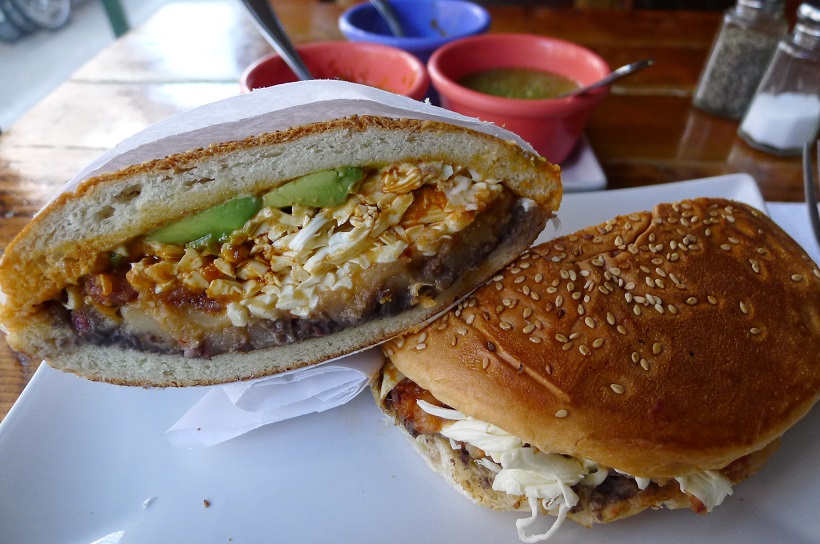 Another highlight at the lower end of the menu is the Pueblan sandwich called a cemita, made on a round crusty roll dotted with sesame seeds almost like a brioche. At $7.99 it will certainly fill you up with its bulging freight of white Oaxacan cheese, refried beans, avocado, chipotle, and chorizo (or other meat of your choice). Your lips will be left smarting. 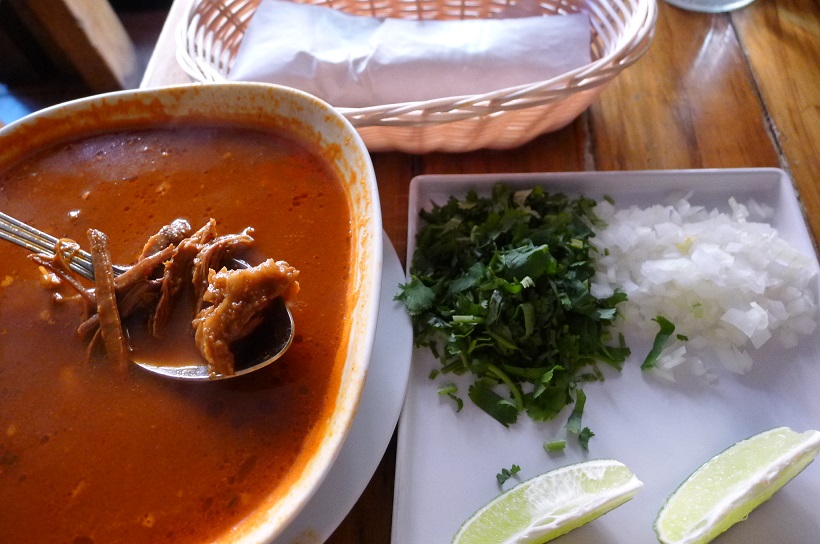 The most remarkable thing on the menu, which flaunts its Tex-Mex dishes, too, is a birria ($8.99) that would do L.A. proud, the likes of which I've never seen before in New York. The fiery red beef-and-chile soup comes with a basket of those aforementioned tortillas, along with chopped onions, cilantro, and lime wedges. For a blissful moment it turns the East Village into East L.A.
· All Posts by Sietsema [~ENY~]