Oringer and Bissonnette Talk Tapas and Moving to NYC

Share All sharing options for: Oringer and Bissonnette Talk Tapas and Moving to NYC

It's been a little over a month since chef/restaurateurs Jamie Bissonnette and Ken Oringer opened the buzzy 120-seat tapas spot Toro in Chelsea, based on their insanely popular Boston restaurant with the same name. Since that moment, they've been heartily welcomed by their famous neighbors, had friend and Top Chef winner Kristen Kish cook at their plancha bar, and have sold a "shitload" of octopus. Here, they tell Eater NY how they really feel about the New York tapas scene and why they suddenly need a banquet chef:

How did you decide on this location?
Jamie: Our business partners Will and Doug found the spot, and they were talking to us about it. We came down to look at it ... we didn't even think we wanted to do a New York restaurant. We weren't actively looking. We were looking to expand Toro in Boston. We came down to look at it, and it was 10 minutes after we looked at it. We were walking down the street in silence. We just looked at each other and went, "Yeah, we have to do this." It just felt right.

When was that moment?
Jamie: Like two and a half years ago. Ken: We have a bunch of partners, and to work out leases and partnership arrangements always takes a little bit of time. You can't start construction then, obviously. You have to come up with design .... It really wasn't that long.

Has anything unexpected happened since you opened?
Jamie: I think the support from the other chefs in the neighborhood and the building has been unbelievably warm and kind. On our opening night, the entire staff of Colicchio & Sons came in single file, very orderly, clapping until everybody was in the building, and said congratulations. They clapped and then walked out. Ken:: That was about 80 people. Jamie: We've had a lot of the guys from Del Posto in...some of the guys from Del Posto have been very good friends of mine for a long time. Just having them come over for a beer, coming into the kitchen, saying hi, saying that they're hearing good things. Ken:: Tom shot me a text the other day saying, "Out of town, heard you guys are doing really well, can't wait to come in." These guys have been incredibly warm and gracious.

What do you think of the New York tapas scene?
Jamie: It's awesome. Ken: There are some amazing restaurants here. We love Tertulia, Casa Mono is phenomenal. Jamie: Soccarat, Boqueria... Ken: We went to Manzanilla when they first opened, and they had some amazing food. It's great to see so many amazing Spanish restaurants in the city, and hopefully more and more people won't say, "Oh, let's eat Italian tonight," or "Let's eat Japanese." And more people will say, "Let's eat Spanish." 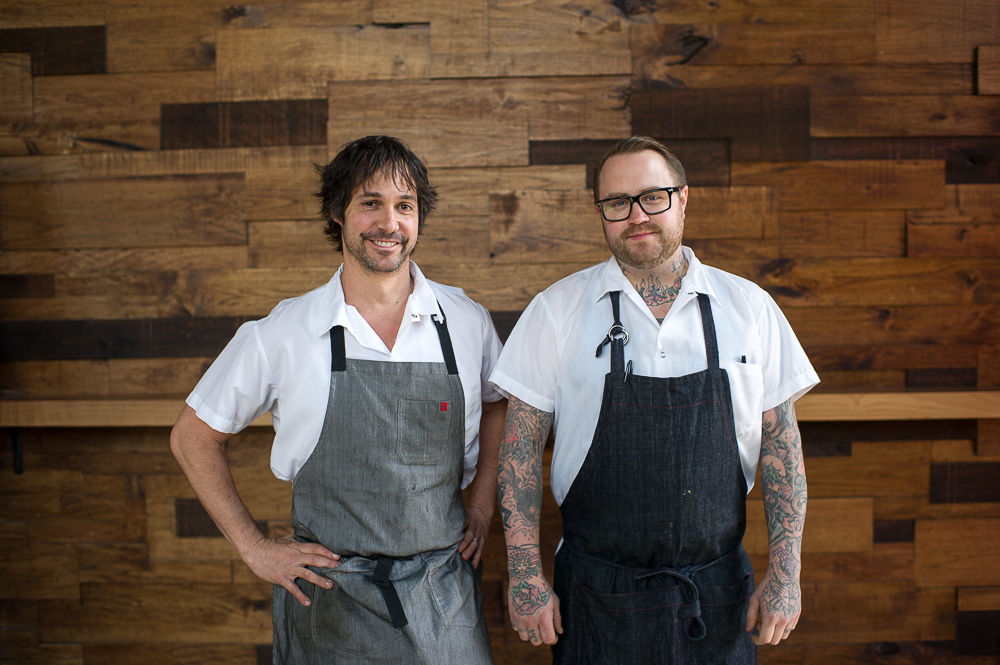 You're famous for your grilled corn [maíz asado] in Boston. What's been the reaction here?
Ken: People seem to really be enjoying it. We don't sell as much corn, because our menu is definitely a lot bigger here. And it's a new market. A lot of people who have been to Boston have the corn and love it, but we've only been open for a couple weeks. People are really eating their way through everything. Even when we opened Toro Boston, it's not like 180 people every night were ordering corn.

Is there something on the menu here people are gravitating to, maybe more than at the other location? Or is it still too early to say?
Ken: Octopus. Jamie: Yeah, I can't believe how much octopus we're selling. Ken: A shitload of octopus. Jamie: Yeah, octopus, abalone, the tripe is ridiculous. We sell so much tripe here.

What was been the biggest difference between opening in Boston and New York?
Jamie: There's so many little differences. We almost doubled our size. We're doing it in a city we don't live in...well, we live in it now. We've got more staff. My biggest challenge has definitely been consistent staff meal. Ken: It's a staff meal every day for, like 60. We need a banquet chef to do our staff meal. Jamie: In Boston we make staff meals, and we're so proud of them. We take time to make really delicious, thoughtful things, and down here, we're like, "Holy shit, we gotta do another banquet?"

I saw on Twitter that Kristen Kish was cooking on the line one night. What's the story there?
Jamie: She jumped behind the plancha bar, yeah. She's an old friend. She did a stage with us at KO Prime years ago, just for fun. I've known her for almost 10 years. She's a great girl. Ken: It was fun. We had her cooking, and Padma was here, and Chang, and she was actually cooking for them. It was nice. It gave us a breather for five minutes to kick back and say hello to some of our friends. It was impromptu; we don't plan things like that.

Are you planning on expanding any of your other restaurants to New York?
Jamie: No way. Ken: No way. Jamie: Somebody asked about putting another seat at the bar, and I quivered. We're not thinking about expansion right now. Ken: We have a lot of things we want to get control of before we even think about that.
— Katie Abbondanza
· All Coverage of Toro [~ENY~]