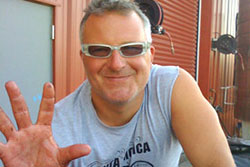 1) Abe Schoener: This week on Joe Campanale's "In The Drink," California-based philosophy professor-turned-winemaker Abe Schoener, of Scholium Project and Red Hook Winery fame, talks about how he sees wine as a unique art form:

I realized that we can have an appreciation for a painting without in any way destroying it, an appreciation for architecture, for sure, without in any way destroying it, but you can't do the same thing with wine. Wine you have to consume. So that's the beginning of it, that's the way in which wine is something that's meant, from the beginning, to fall apart. But as I thought more about it, it's not just consumption. It's what we call something like the aging or maturation of wine. Aging is, both for human beings and for wine, a kind of falling apart. 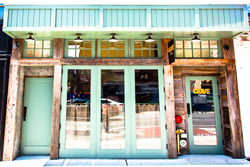 2) Bringing Montauk to Midtown: Jessie Kiefer of "The Morning After" chats with Todd Mitgang about cooking and sourcing local seafood at South Edison in Montauk and how that influenced his Turtle Bay restaurant Crave Fishbar:

Being in Montauk really opened my eyes to?local seafood, working with local fishermen, guys that are going out and coming into the dock with the beautiful catch, coming to my door, saying 'Chef, do you want to buy this?' 'Yes I want to buy it but what can you do with it?' So that was just a really incredible experience. And coming off of that and coming into Midtown, taking a lot of what I learned out there and working with some of those local guys, knowing what was in season, working with some of the farms out there and bringing it to Midtown. 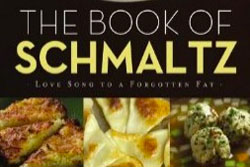 3) Michael Ruhlman on schmaltz: Mike Colameco brings veteran food writer Michael Ruhlman in to the studio to talk about his new book, The Book of Schmaltz, which celebrates the history, flavor, and diverse uses of chicken fat. Here's Ruhlman on why he's livid about the lipid:

That's what I love about schmaltz: you have to make it yourself. You can't really go out and buy it, it's kinda volatile so even delis that sell it, it's not quite the same as when you make it at home?Schmaltz is something you can only truly make at home. And then it has a flavor that is unlike anything else. It's the flavor of roasting plus chicken plus onion, browning plus chicken plus onion. It combines these flavors. Potatoes cooking in it take on this depth that you don't get with bland olive oil. 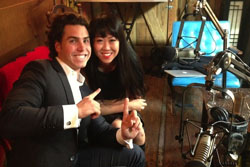 I was inspired by this new generation of restauranteurs and sommeliers, and seeing that it was really about creating culture, and creating connections, and having a quality of life, and having work at the same time...and maybe even seeing that your work and your life could come together at some point where it doesn't actually feel like you're working. So I thought, what a great way to be, what a great way to exist that everything you did on a daily basis, while it is work, it actually feels like you're improving the quality of your life. 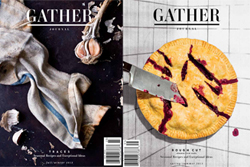 5) Gather Journal: Michael Harlan Turkell of "The Food Seen" talks to Fiorella Valdesolo and Michele Outland, respectively the editor and creative director of Gather Journal, a bi-annual story-and recipe-driven food magazine. The magazine received a James Beard Award earlier this year for photojournalism and graphic design. Here's Outland on the origins of the magazine's visual style:

I've worked at really amazing places such as Domino and Martha Stewart and I've learned a lot in those places and worked with amazing people, so obviously a lot of this is pulling from those people I've worked with before. But I was very interested in trying to push the visuals in a way that maybe hasn't quite been seen before in food photography. And we have nothing to lose, so why not?