Is the Glamor Dog Looming on the Horizon?

Share All sharing options for: Is the Glamor Dog Looming on the Horizon?

A half-century ago, hamburgers and hot dogs were considered coequal in American cuisine, fit for a modest meal at home, a quick supper for the kids before mom and dad went out, an unfussy backyard barbecue, or, increasingly, a cheap repast at one of the new national burger chains just beginning to flourish. But, starting in the '90s, the hamburger somehow got the upper hand, thanks partly to designer ground-beef mixes originated by Pat LaFrieda and the respect it was afforded by Daniel Boulud, who stuffed the patty with foie gras and short ribs at his DB Bistro, almost as a parody of a burger. The hamburger was on its way to an upscale stardom as the lowly weenie lagged behind. 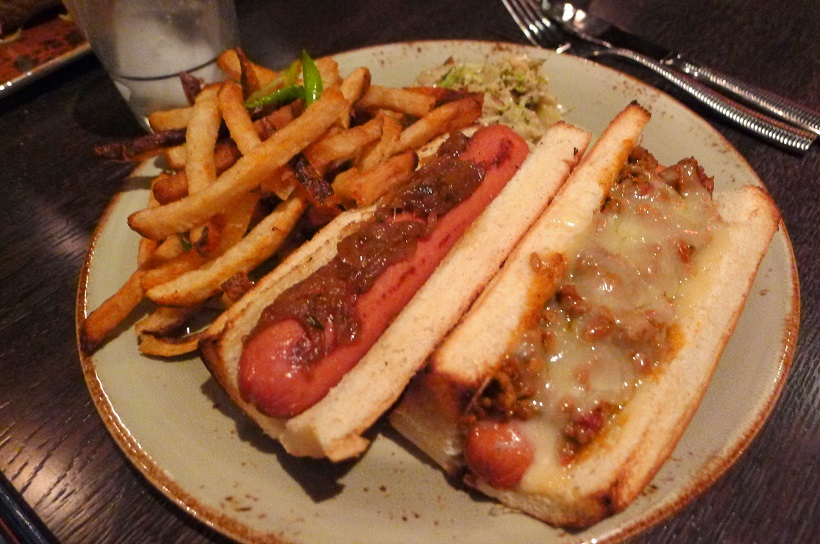 But, now the frankfurter may be scampering up the social ladder. At new Harlem brasserie, The Cecil, a pair of hot dogs are listed among the entrees, given full respect among the $13 cocktails and cinnamon-scented guinea hens by chef Alexander Smalls, who fills his menu with flourishes from Africa, the Carolinas, New Orleans, and the Caribbean. The pair of hot dogs is $17, and comes sided rather conventionally with great fries and a mayo cole slaw improved with slivers of sweet red pepper. The hot dogs are of large circumference. One is deliciously smoky, filled with veal and topped with a Senegalese yassa sauce, which is a little more interesting-sounding than it turns out to be. Made of chicken and somewhat blander and paler, the other comes smothered in cheese and chili con carne. 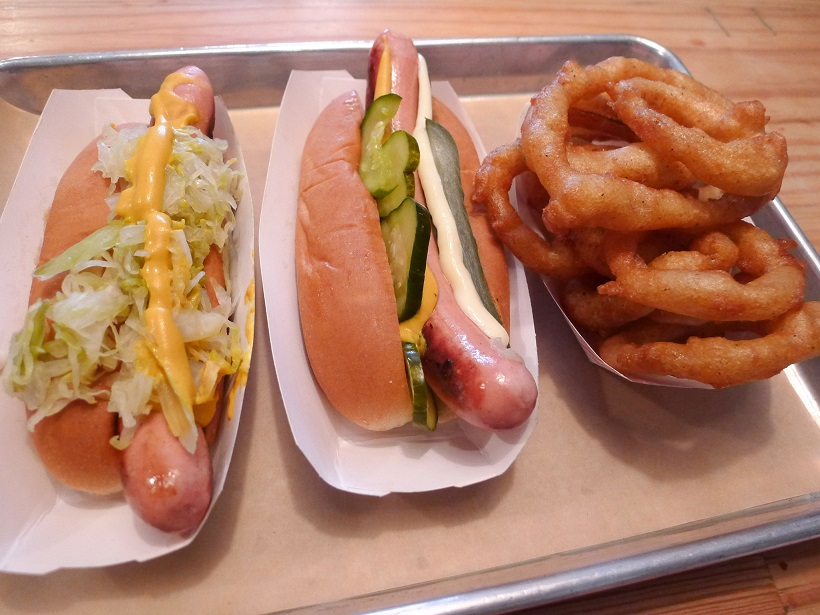 Other upscale places have helped in the frankfurter's ascent over the last few years. In late 2009, Park Slope's Bark Dogs turned the city's tube steak universe upside down by basting its griddle-cooked designer wiener (made by Hartmann's Old World Sausage of Canandaigua, New York) in smoked lard, before outfitting it with a series of apropos toppings, of which the pickle dog is one of the best and subtlest. Possibly justifying the price, these hot dogs are so luxuriantly long, they protrude from the bun on both ends. 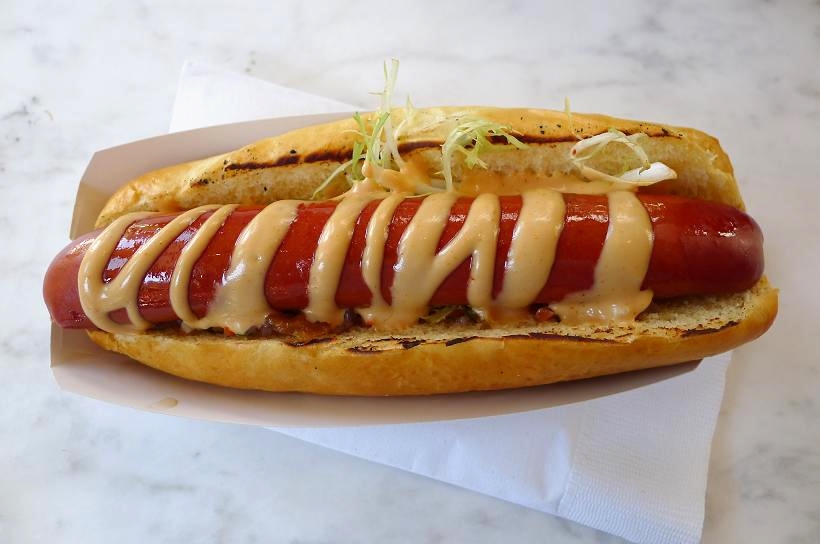 Doing what he'd previously done for the hamburger, Daniel Boulud rehabilitated the hot dog at his walk-in corner joint across from Lincoln Center, Epicerie Boulud. He didn't try to change it much, fabricating a perfectly flavored, natural-skinned German frankfurter as if it were an Alsatian saucisson, grilling it with exaggerated care, squiggling on the "299 relish," and depositing it on a homemade bun. At $7.50, it may be the most expensive plainish frank in town. 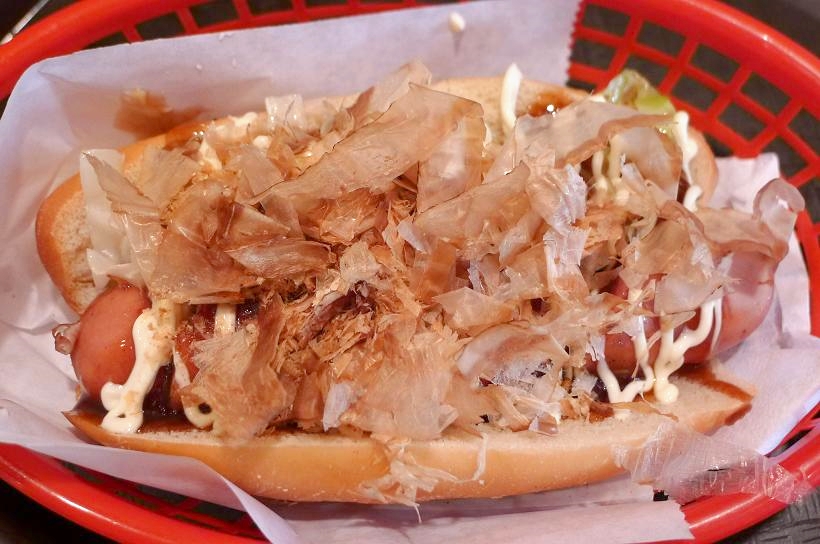 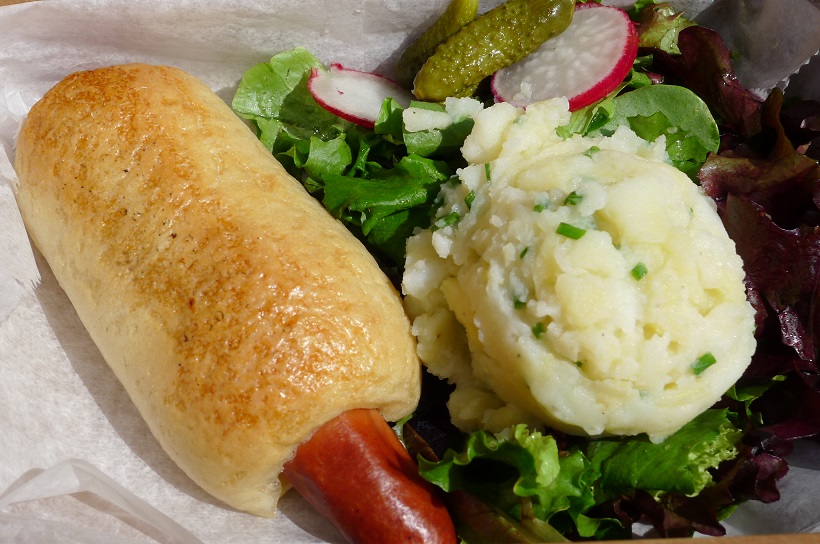 Not to be outdone, German bakery Landbrot got into the act, wrapping a high-quality frank in a baked-on bun, and serving it in a stylish carryout box with green salad, chive-flecked potato salad, and – rather than bulbous Teutonic dill pickles – vinegary French cornichons, if you please.

Remember, the upscale hamburger grew slowly, but is now ubiquitous among New York restaurants, with customers lining up for the latest evocations, as recently seen at Umami Burger. The hot dog is due for a similar upscaling. When economic times are tough – for diners and restaurateurs – both will be turning increasingly to hot dogs, just as "dirty-water dogs" are largely disappearing from NYC streets.
· All Posts by Sietsema [~ENY~]