Thai food from the region of Isaan, in the country's northeast corner bordering the Mekong River, has become an overnight sensation at bistro-level restaurants like Pok Pok, Uncle Boons, Somtum Der, and the East Village Zabb Elee, searing our tongues with Thai bird chiles and regaling us with fresh leafy herbs we never knew existed. But the longer, slower accumulation of more modest, working-class Siamese cafes continues in places like Elmhurst, Astoria, and Hell's Kitchen.

As a matter of fact, the already thronged strip of Thai restaurants along Ninth Avenue starting at 56th Street and recently extended to 36th Street is also exploding, so that I counted 21 on a recent reconnaissance mission. While many are frankly awful, peddling the sort of sticky-sweet pad Thai that many of us try to avoid, and emphasizing drinks at the expense of food, there's a brand-new one that offers a menu that more cheaply parallels that of the fancy Isaan places, though somewhat lacking in their subtlety. 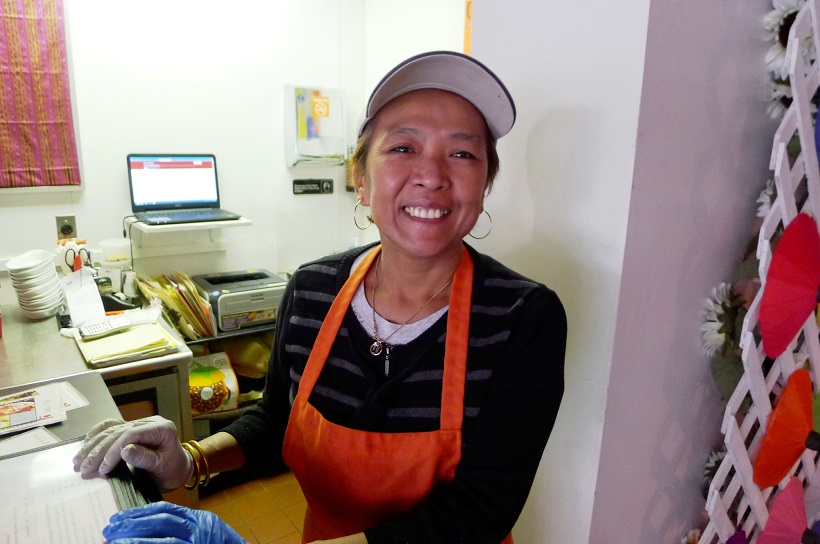 Lard Ubol is helmed by Ratchanee Sumpatboon, a rare female Thai chef nicknamed "Black Duckling," who once cooked at a wonderful Thai restaurant in Astoria – now long gone – called Poodam. The new place is a gloriously undecorated box a few gritty blocks south of the Port Authority. Why should you choose this one? The menu is virtually all Isaan food, giving a clearer picture of the cuisine at the ground level than more upscale spots. 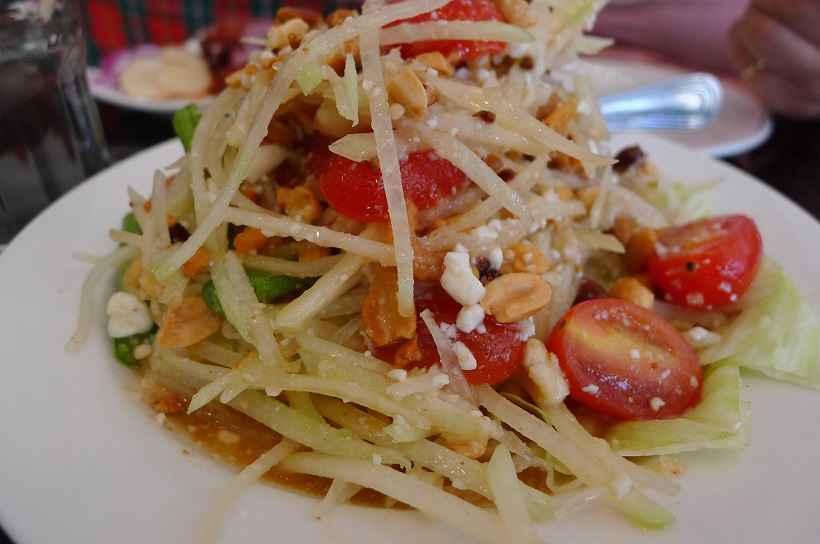 As with Somtum Der, a vast collection of shredded green papaya salads are offered ($10 to $12), including one snowed with "salted egg," a popular Isaan method of ova preservation. Another features crab and pickled fish, and still another forks up crunchy with peanuts, dried shrimp, and tiny raw Thai eggplants, which look like miniature watermelons. 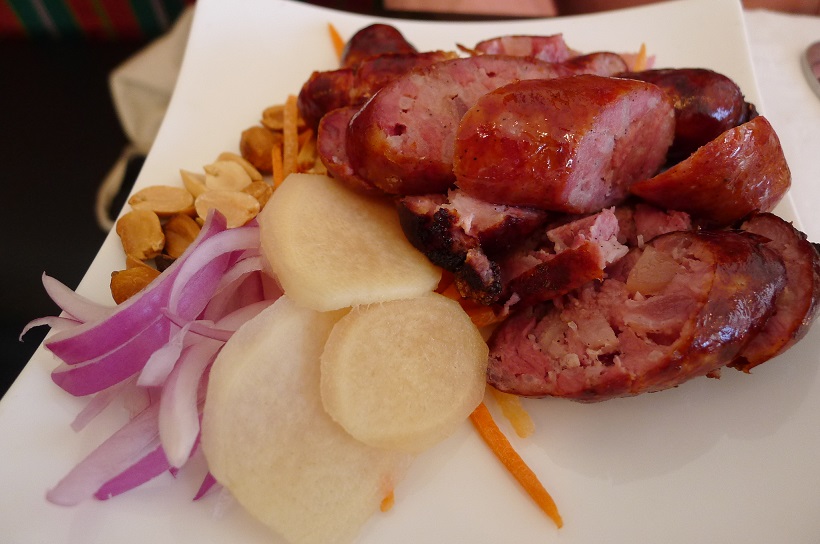 Isaan is big on bar snacks. Served with shards of sliced fresh ginger, raw purple onions, and toasted peanuts, Isaan sour sausage ($7) is unbeatable, with the accompanying crudite complementing the sharp porkiness of the coarse-grained link, which is something like a tart Polish sausage. 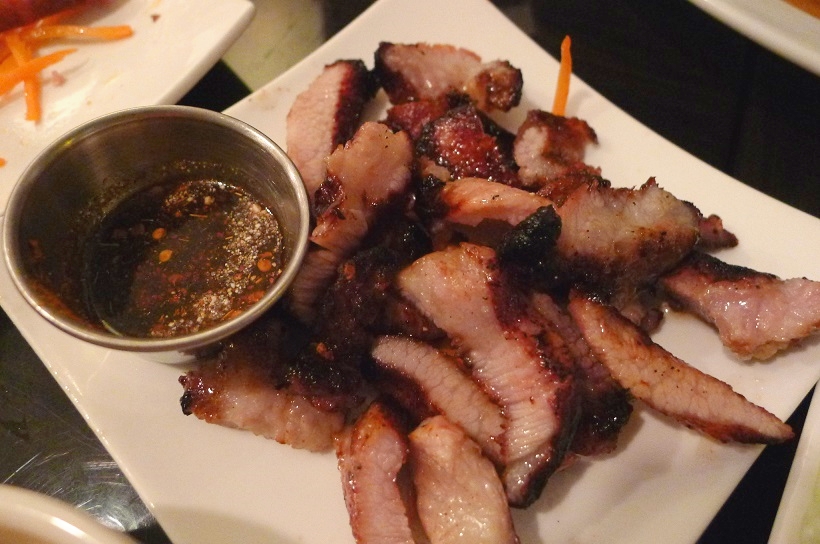 Other worthwhile snacks include grilled beef and grilled pork tidbits, the latter nicely rimmed with fat and flaunting a charred edge, both arriving with a dark pungent dipping sauce. Another porky surprise – also being featured on the menu at Pok Pok – is kor moo yang ($11): grilled pork jowl, though Pok Pok serves it more arrestingly with iced mustard greens. 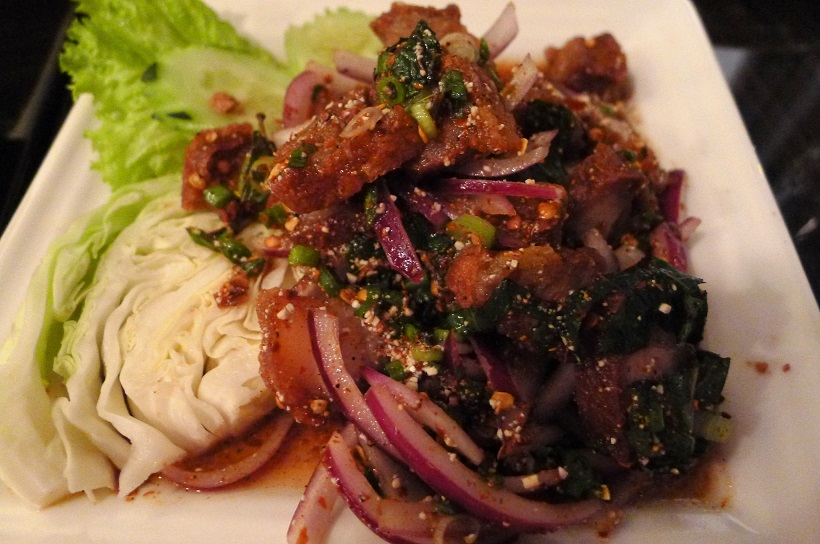 The spicy salads called yums and larbs are well represented, including a particularly good larb moo krob containing plenty of crunchy pork, though the vegetal material on the side is mainly raw cabbage. Among the chef's specialties – no surprise given her nickname – are plenty of dishes featuring duck. 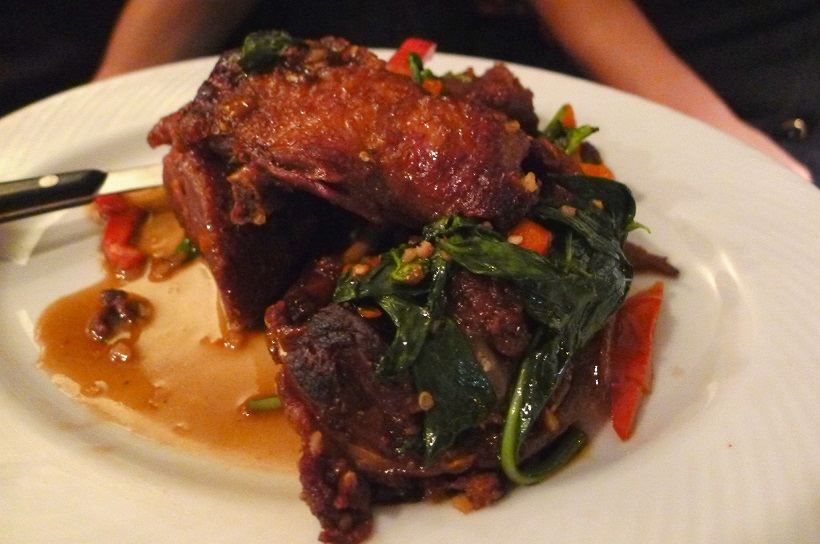 A kra prao ($15) features big meaty chunks, including a pair of nicely gnawable drumsticks, clobbered with chiles, long beans, and a bale of basil. It begs to be eaten with sticky rice. Neither are the noodle dishes so popular in Isaan missing, many of which originated in China. 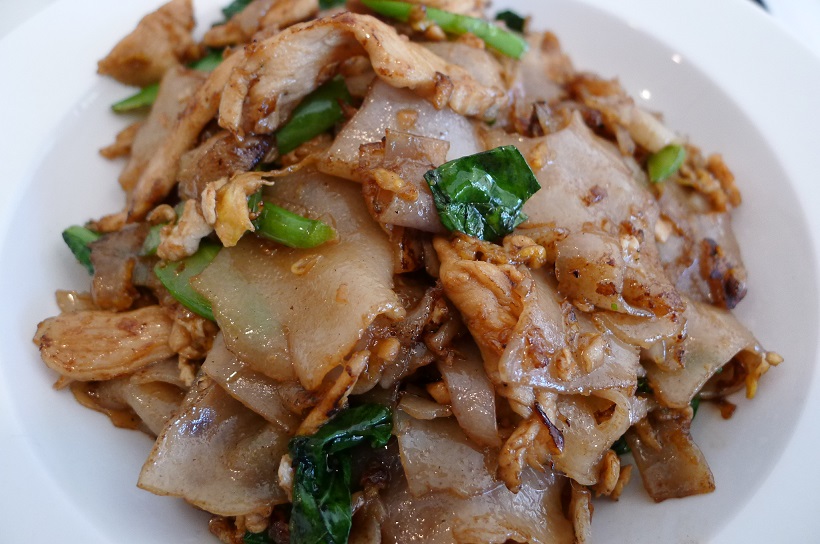 Priced at $8, a plate of pad see ew will really filled you up with stir-fried broad rice noodles and Chinese broccoli, best ordered in the chicken or shrimp versions. 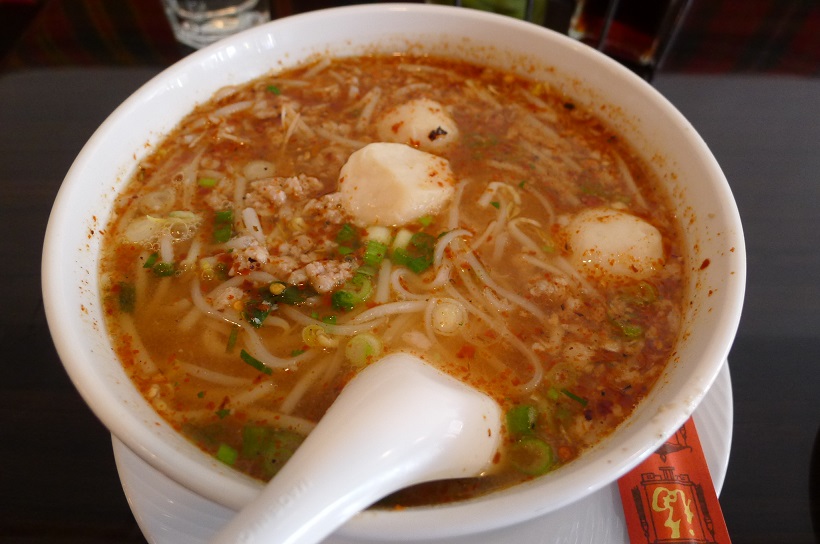 As with many of the Hell's Kitchen Thais, there are lunch specials at steep discounts. Yesterday I had a bowl of the meal-size soup called guay, thiew nam tok ($9). It came with a small chicken larb on the side, and happily bobbed with fish balls and coarsely ground pork, with thin rice noodles and sprouts in the depths, and stippled with fiery chiles. 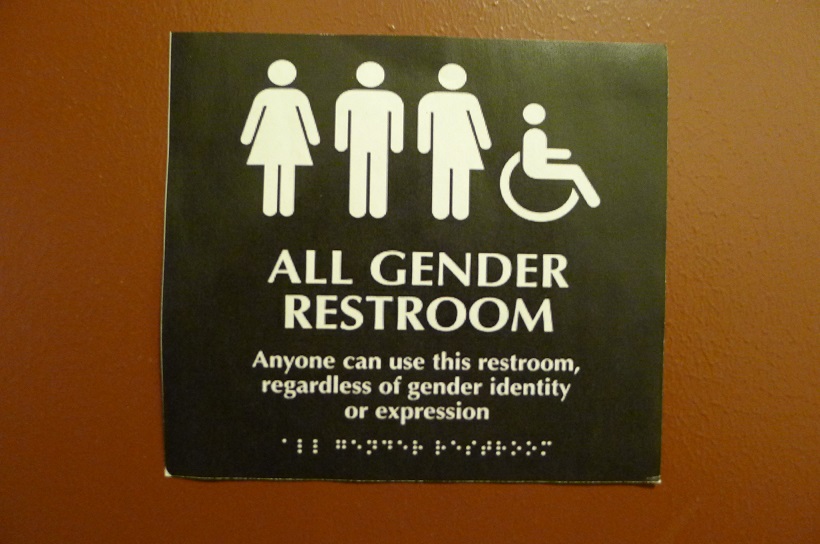 The sharply flavored food at Larb Ubol has really caught on with office workers and Clinton residents, filling the dining room around 8 p.m. every evening. So go early, go late (the place stays open till 10:30, 11:30 on weekends), or go at lunch. By the way, this is the first Thai restaurant I know of to be determinedly transgender friendly – as evidenced by an amazing sign on the restroom door.