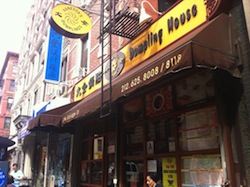 Paul Gerard, chef and co-owner of the East Village restaurant Exchange Alley, seconds the advice of the Mexicue guys and likes going to Vanessa's Dumpling House with his three-and-a-half year-old son:

"Monday is my only day off, so I take my son out for boys night, or Dumpling Night. And Vanessa's sesame seed sandwich is probably the best. You can get duck, pork, or beef, but the duck is fantastic. They're all fantastic. It's a big pancake, and it's amazing watching them cook them. They have these huge cast-iron pans they dump the batter in and make this big sesame seed pancake, and then they cut it probably in sixteenths and take the little triangles, cut them in half, and fill them almost with the same stuff that's in a banh mi. It's $2.50, it's amazing. That's kind of a go-to. It depends on where he wants to go, but if we're in the area of Vanessa's we'll go there."
· All Coverage of Exchange Alley [~ENY~]
· All Coverage of Dining Confidential [~ENY~]
[Photo]