Steven Morgan on Tribeca Grill and His Future at Alinea

Share All sharing options for: Steven Morgan on Tribeca Grill and His Future at Alinea

Welcome to Sommelier Exit Interview, a feature in which Eater chats with notable sommeliers who are about to leave one restaurant for another. This interview was conducted by Levi Dalton, the wine guru behind the I'll Drink to that Podcast. 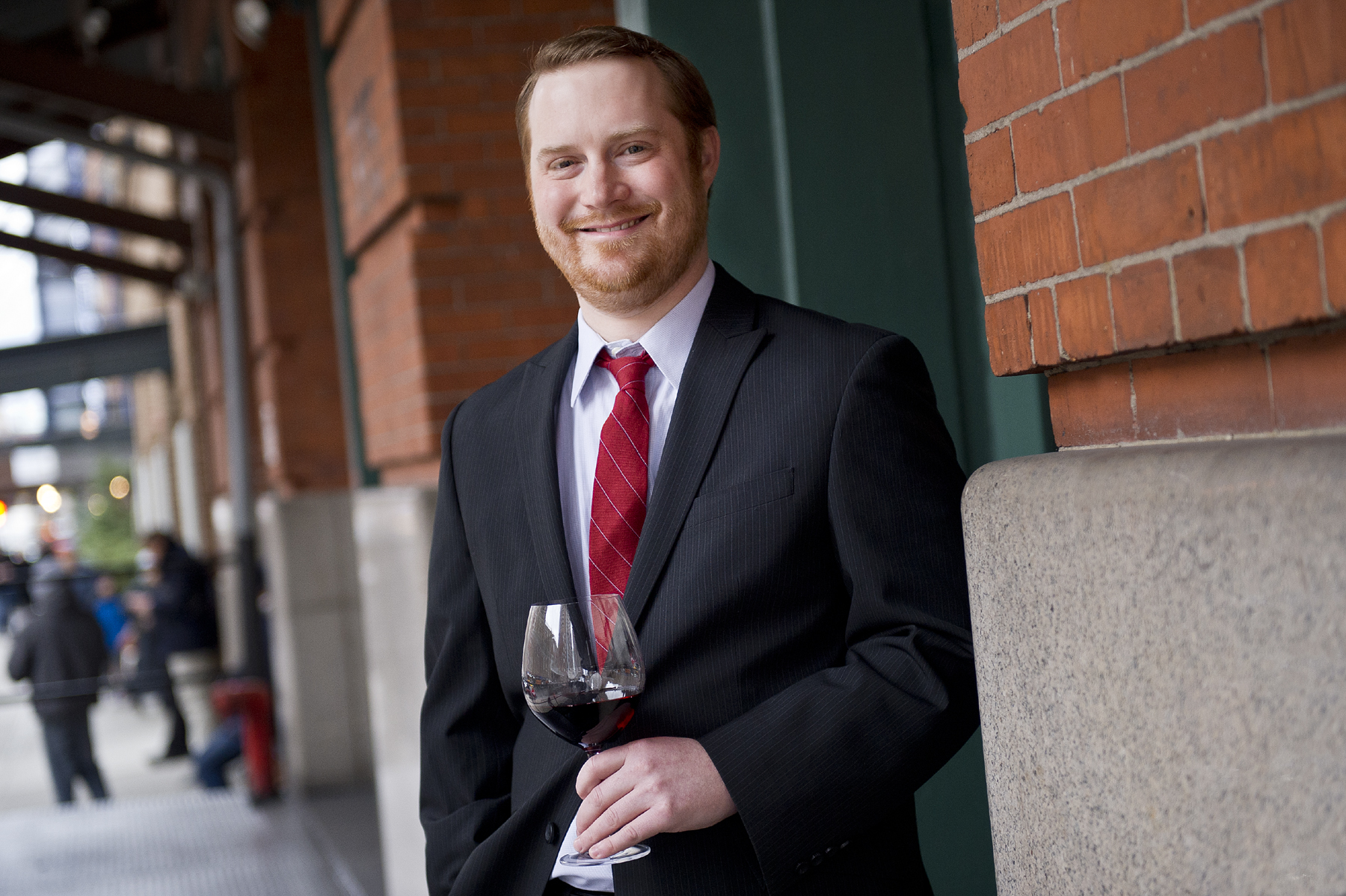 Steven Morgan has worked with wine at a diverse set of New York restaurants. His sommelier career began at Del Posto in the Meatpacking District, where he worked with its extensive selection of Italian wines before moving to take up a wine director role at the more neighborhood focused Dressler in Brooklyn, and settling in after that as the sommelier at Tribeca Grill. Now Steven, at the age of 30, has been offered a position on the team at Alinea, the mecca of experimental dining located in Chicago. He'll soon be leaving New York City behind to return to the area where he grew up. Eater caught up with him to hear what he had to say on the eve of the big change.

Can you tell us how the position at Alinea came your way?
I had been planning to move back to Chicago this year. One of my best friends is a Beverage Director out there. He heard that Alinea was looking for another sommelier and that they had had very little luck finding someone in Chicago. So I, with very little connection to that group, started talking to them, and did a couple of phone interviews. I went in and staged one night, and I got offered the gig.

And what was that stage like?
It's very much an experience. Right now the menu is 20 courses. You get three or four tables sat at once, and most every guest does wine pairings, so you're really hitting the ground running. You're talking and putting down glasses and I watched in amazement at the speed these guys were going at. It was really beautiful to watch. I did a couple of pairings and just managed to keep myself busy and involved. I'm not the kind of person who can just sit and watch during service.

What do you expect your role to be at Alinea?
Everyone until me has been hired to start as a runner in the kitchen and work their way up. They are moving into a situation where their goal is to make it really a team atmosphere where everyone is tasting the food and deciding on the pairings. What I said I could do was spend a lot of time bringing in new producers who aren't in Chicago. I'll also be working with the auction side of things so I can bring in wines with age that are ready to drink. The staples of a high end wine pairing. They want to notch up the pairings while also making the pairings more comforting inside of what is a very challenging dining experience.

You've lived in Chicago before. What is the Chicago wine scene like in comparison with New York City?
Chicago is oddly more openly experimental while having less to choose from. There is a lot of Italian wine that I see in New York that just isn't in Chicago. Generally the price point in Chicago is lower. People are really looking for value. And it is still a steakhouse town, so I think the steakhouse palate is still there. It is kind of this weird dichotomy where you have steakhouses and then you have Moto and Alinea that are really pushing the boundaries.

What is your perception of Alinea and what do you find especially exciting about what's next for you?
I think in most restaurants wine pairings were something that were worked through the by the glass program and not a focus. Not many people were going whole hog for pairings being something in combination with the food and an equally powerful experience. With what Alinea has, there is an amazing opportunity to bring in new producers and play with different wines that maybe aren't going to be what people are used to.

Before you worked at Tribeca Grill you were employed at Del Posto, and at Dressler, in Brooklyn. How would you compare the different experiences?
The education in fine dining and the education in wine that I got at Del Posto through what I got to taste was how I really got introduced to being a sommelier. It was an epic transformation in how I looked at restaurants. I moved to New York because I wanted to intern at Marvel Comics, not because I wanted to be in restaurants. For so many people who came to Del Posto it was their once in a lifetime celebration. It was fantastic. It is fun to celebrate with people and have it be a special experience.

With Dressler I got to build a wine focus at the restaurant. I did many wine dinners, but we kept a neighborhood mentality. It was a challenging experience with budgetary restraints, but it offered a lot of creative freedom.

Tribeca Grill is truly an iconic wine program, and I got a ton of freedom. I curated amazing old wines. Tribeca Grill, even with a list that big, was a place where I got to make sure people felt really, really comfortable. The focus was on them and having them enjoy their time there.

What wines did you add to the list at Tribeca Grill that weren't represented when you arrived?
My first love is Italian wine, so I made sure we would bring in more esoteric grapes and more values so that there were things to play with. I also went to California in March. In the midst of that trip I got to really start tasting around and there are a lot of people who are doing a really great job out there. So I tried to find the space on the list to give them support. I still focused on sourcing wines with age and it became a real passion to find things that were ready to drink and great values. Because that is why I think you go to Tribeca Grill. It's not to buy a 2010 Chateauneuf-du-Pape, it is to buy a 2001. So I was looking to find wines that had that age.

What wines did you find interesting that maybe you didn't know well before you took the Tribeca Grill job?
My focus had been Italian. In going in to Tribeca Grill, part of my excitement was diving into the deep end of the Southern Rhone. Going to a restaurant with more Chateauneuf-du-Pape than anywhere else in the world and more aged Cabernet than pretty much anywhere in New York was a chance to challenge my palate. So I said okay, "Now I have 100 different Chateauneuf-du-Pape producers, how do I make that accessible to people?" And California Cabernet was not my favorite wine in the world, but I worked within that to find the specificity. What does Calistoga mean? What does Oakville mean? There are such different styles and tastes. There was a chance to find the wines that I liked and with the vintage depth to see how they changed with age.

Sizeable wine lists with a lot of selections seem less common today than they once were. What was it like working with that kind of big list at Tribeca Grill and at Del Posto?
It means every day you get to go home and look up something new and go in the next day and try to sell it. And maybe if you are lucky you can sell multiple vintages in the same day. One of my favorite days at Del Posto was when I had just read about Giuseppe Rinaldi and I was like "Okay, we have '94, '96, '97, '01 all on the list. Let's talk to people and try to sell them all." And I got to try every vintage of Giuseppe Rinaldi that we had on the list. I could then know for certain what Giuseppe Rinaldi tasted like. That kind of opportunity was huge. The next time you talk about those wines you aren't talking about them from a book smarts position but from having experienced them. A lot of times people don't get to experience those wines.

What should I be drinking if I go to Tribeca Grill tomorrow? What are your insider pro-tips?
I think that there are some really great deals on that list, especially if you are willing to spend a little money. Chateauneuf-du-Pape and older California Cab are always going to be great deals. There are amazing old Burgundies for not that much. Some good values from Tuscany are on there. And there is stuff that no one else in New York has, like the Eyrie Pinot Meunier that isn't even generally sold in restaurants.

What was it like working with Tribeca Grill Wine Director David Gordon?
David is pretty amazing. He has been able to taste an amazing amount of wine and he has a really good memory for it. So you can ask him about wine and his taste memory is really impressive, but at the same time there is zero pretension. He stills loves big wines when it is not popular to love big wines. He will never be bored by Chateauneuf-du-Pape. That was his first love.

As a sommelier working under him David allowed me a lot of freedom. The only time he got upset with me was when I found a great Grenache and he saw it on the list and he was like "Why didn't you tell me about this? Why haven't we sat down and tasted it?" I can't say enough good things about working with him. He was supportive and cared about people.

When is your last official day at Tribeca Grill?
January 19th.

And do you have special plans to mark the occasion?
Amazingly enough, my mom is going to be in town. So my mom and my brother and his wife will come in. And they'll be some friends in. There are a few bottles I've set aside to try that night. It's a big change in my life, so I'd really just like to sit down and have a couple nice glasses of wine and take it all in.
· All Wine Coverage on Eater [~ENY~]
[Photo by Evan Sung, courtesy of Steven Morgan]