Share All sharing options for: Pascaline Lepeltier on Whales That Drink Dom Perignon

Whales like wine. Whales like to dine. Herein, some prominent New York sommeliers share their biggest bottle moments. What happened at the table, and more importantly, what did they drink? Right now: Pascaline Lepeltier. 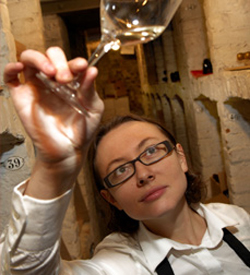 Pascaline Lepeltier, Head Sommelier of Rouge Tomate: If I have to remember one dear to my heart, it was when I was still working in France, at L'Auberge Bretonne — this was at the very end of my time there. It was a time where I was lucky to enjoy a lot of great bottles...including a Dom Perignon 1959.

One night, a table of three Japanese guests came to the restaurant. It is always for me impressive to serve Japanese clients because of their rules and codes of politeness. On that night, the guests were also wine connoisseurs. I went to the table as they were looking at the list, and right away they ordered La Tache 1979 — at that time around 1,800 Euros. But they also wanted some Champagne to start. So, still pretty euphoric and speechless because of the Burgundy they had ordered, I showed them the Champagne section.

They asked which ones I had (the section was a good eight pages long, with verticals of Clos des Goisses, Clos St. Hilaire, Selosse, etc. etc. ... and Dom Perignon) and amongst those, which one I loved. Dom Perignon 1959 came to mind right away. When I had tasted one of the bottles six months before, I was totally amazed and moved by the spectrum of aromas, the creaminess, the saltiness, the complexity and the length of that wine, which had lost almost all its effervescence. The bottle was 3,500 Euros.

When I said Dom Perignon 1959, it was really a bold preference. I did not at that moment even think they would go for it. I did not really try to sell it. I was just talking about my experience — and they picked it, just like that. I was really, really speechless. I think if I had tried to "sell" it, they would not have picked it.
· All Coverage of Wine Whales [~ENY~]
· All Coverage of Whale Week [~ENY~]
[Photo]