Share All sharing options for: Celso Moreira on Making Reservations for Waldorf Guests

New York City has plenty of Whales, sure, but it's also a destination for big-money people traveling from all over the world. To get a sense of where these folks are going, Eater talked to a couple of concierges from luxury hotels. Up first: the Waldorf Towers. 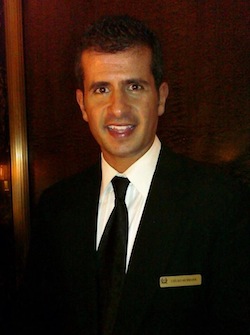 Celso Moreira is one of the concierges at the Waldorf Towers, the boutique hotel located at the top of the Waldorf-Astoria on Park Avenue. With over 1,400 rooms between the Astoria and the Towers, Moreira and the other concierges are asked to make a whole lot of reservations, to many of the city's biggest restaurants.

The motto for the hotel is "The difficult immediately, the impossible takes a few minutes longer," which in terms of restaurant reservations Moreira is able to achieve because of the Waldorf's reputation, its big money and famous guests, and the sheer scale of the place. Eater recently chatted with Moreira to get a better sense of the reservations that these high-rolling visitors are requesting and what factors go into his ability to get those tables.

Tell me about the Waldorf Towers.

I've been here for four years. Before that I worked at some other luxury hotels in New York. The Towers part is the home of the President of the United States [when he stays in New York], we have some residents, and this is where most of the dignitaries and the celebrities will stay. A lot of our guests, I'd say 70 to 80 percent, are repeat guests. We have generations of parents, grandparents, their engagement happened here, their wedding happened here, now their grown children are coming and they want to pass that tradition over to their friends. So we have three to four generations together at the same dining table at our incredible brunch that we have here.

With these repeats, are you able to know ahead of time what reservations to make?

We have guests that call me and say, "Celso just go ahead and make the reservations for the usual." So then it comes to me, from my notes or our database in the computer system, what time they dine. Some countries it's different: Brazilians dine at 9:30, 10 o'clock, our Greek [guests] dine at 9 o'clock or 10 o'clock, Americans usually prefer pre-theater, a lot of countries go after theater, and some want something ethnic, others want something traditional. Sometimes they just want walking distance, where they don't want to travel anywhere. We are lucky because our location, we are very close to a lot of the best restaurants in the city.

What are the most-requested reservations?

A lot of the French restaurants that are very well known, like La Grenouille, Le Bernardin, Per Se, Daniel, Jean Georges. But a lot of guests want to know what's new. A lot of them want to be updated with their food, but some of them want to go to the same restaurant, sit at the same table, and eat the same dish. So there's different groups of people.

That's why it depends on us to remember to the best of our ability and be able to provide that uniqueness by being authentic and being updated. This is a city that evolves. It's very hard to keep up with all the restaurants, the clubs, the plays, the lounges, museums, art exhibits, historical sites.

What are the most difficult reservations to make?

It depends on the restaurant. When it comes to fine dining, there's a very select group of restaurants. The difference, when we call, usually we know the person who's going to answer the phone. In other hotels I've worked for, I used to get a plain "No" [with tough reservations]. With the Waldorf, though, it's, "Let me see what I can do for you. Can the guest do a little earlier, can they do a little later? Can they go another day?" I usually make it easier for the restaurant so that maybe we can negotiate. If the guests want to go at 7, but I can get them 8:15, that's not that far away. But that's more like friendships that we've built over the years, based on our no-show rates?the restaurants can track that. And there's a lot of respect there, we've eaten there, they know us by name. So it's a relationship that's accrued over the years. Besides numbers, there's a friendship in the industry that's evolved over the years, and a respect.

Are there any restaurants with which you've cultivated an even closer relationship, where you can do special packages or last minutes reservations or things of that nature?

A lot of the guests that come from here, usually the restaurants try to add an additional touch, whether it's a dessert or a glass of champagne. The more information we get from the guest, the easier our job is. There are three basic questions that I ask: Are we celebrating anything special? Do you have any dietary restrictions? And is there anything you'd like to request of the chef, that you liked last time you went there. Those are the things that I ask to make sure they get what they want.

Do you ever guests who ask you to get a reservation, but say, "Celso, surprise me"?

It's just your ability to read the guest. The other request we get a lot is "something New York."

Where do you send them when they ask for that?

What is New York? Is it unique, is it fun, is it loud, is it busy, is it old-fashioned, is it something downtown, or in Central Park? So then you need to do a little research, basically. If I don't know the guest well enough, I'll usually ask them, "Well what was the last restaurant that you liked?" And based on that, you have a reference point, you can just get them.

So I do get a lot of "surprise me," but that's basically how we update ourselves. Like, "Oh last week I was at a new restaurant and I thought it was incredible, I think you should try that." And then the trust comes back. We try to give the guest the chance to have the same experience that we had. Try to repeat that experience. So we expect the restaurant?not because I'm a concierge and I went there and I know they're going to have a little flag on my table to make sure everything went well?but I also make sure when my guest goes, they'll have the same thing I had.

Do you ever get guests who want food from a high-end restaurant delivered to their room?

We do have a lot of that. We actually have very famous chefs coming into the hotel and cooking for guests.

Tell me about that.

Because a lot of our rooms are set up as residences, there's a full kitchen. We have engagements [that happen here]. We had one where a chef, a very famous chef, came here to prepare a 12-course dinner?it was a five-hour meal?for them in their suite.

It was a Michelin chef, very well-known. And we do see a lot of takeout requests, but a lot of chefs, in order to maintain the quality, they want to come here.

How does it change in September when the UN is here? Do the requested reservations change?

We devote ourselves to that event. The hotel becomes an airport, we have metal detectors all over the place. This is a very "orange code" area, because aside from our own President, we had 53 countries last year. So a lot of our guests avoid it. We try not to encourage the guests to come during that period, because if they come and get scared they won't come back for that time.

So you personally, when you're not at work, where are you eating?

What I like about New York is just being surprised. For example, a trip to the East Village, it's going to be completely different. I was there last week?I went to the Russian & Turkish Baths, it's been there since 1892, then I went to what's for me one of the best vegetarian restaurants, it's called Angelica Kitchen. My sister became a vegetarian, and we have a lot of vegetarian guests, so I wanted to try that. And it was incredible.

I live in the Upper West Side, so when you go to other parts of New York, it's almost like being in a different city. People walk different, dress different, behave different, food is different. You absorb a lot of things in your day-by-day in New York, and then you bring that to work.

So you're always scoping out new restaurants to recommend to guests?

We are very attentive because of the way we are trained in luxury hotels. We want to make sure the guests are well-treated. So I'm always watching how people react [when I'm out].

What is most incredible about working at this hotel is that we have the whole backstage that allows us to do our jobs. We have an incredible, incredible pastry department, so if you want to set up something last minute, we can make it happen. We have an incredible florist in house. We can always organize anything. It's just a place where you always have to remind yourself how incredible this building is.
· All Coverage of Whale Week [~ENY~]
[Photo courtesy of Celso Moreira]