Restaurateur/hotelier Andrew Tarlow always has a few tricks up his sleeve. A name change, a stealth Greenpoint bar project, a mixed use creative arts space — these are Tarlow things. And now, his latest surprise is a new dinner series in the private event space of the Wythe Hotel.

Tarlow and Reynard chef Sean Rembold are inviting chefs and winemakers to stay at the hotel for a few days and collaborate with them on a series they're calling "Dinner With Friends at the Wythe Hotel." 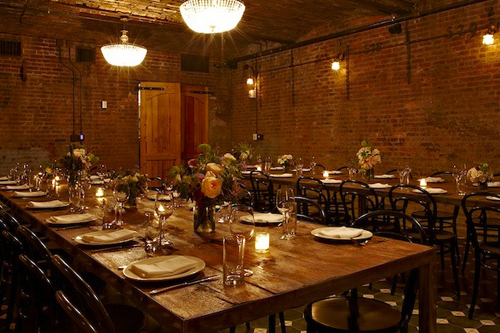 [The private event space at the Wythe Hotel via the Wythe Hotel]
The first installment of the series kicks off on January 30 with Chris Fischer, the chef and manager of Bettelebung Farm in Chilmark, Massachusetts. He will be joined by Andrew Mariani, the owner of Scribe Winery in Sonoma, California. The team will prepare a four-course meal with wine pairings, for $125 per person. Tarlow explains:

Some of the thought behind this was obviously that having a hotel, we can attract our friends and have them stay with us for a week. It's the idea of cooking with friends and inviting them to our home. We're trying to offer up an experience that you can't get in New York.

Here are the menus for the first three nights of this series (January 30 - February 1):

Dinner With Friends at the Wythe Hotel by Eater NY