Is Buddakan Mulling Over a Move to Midtown? [UPDATE]

Share All sharing options for: Is Buddakan Mulling Over a Move to Midtown? [UPDATE]

Is Buddakan preparing to move to Midtown? A tipster reports that owner Stephen Starr and his team recently checked out the former Haru space at 280 Park Avenue with plans to come back for a second look. The office building was sold in 2011 and the owners have been undergoing a massive renovation of the building, which encompasses the entire block between 48th and 49th streets. Haru closed last summer to make way for the renovations, which when finished could offer a tenant up to almost 18,000 square feet of total space. That is slightly bigger than the current Buddakan space next to the Chelsea Market that has been the restaurant's New York home since 2006.

A rep for Starr Restaurants says that nothing is imminent, telling Eater, "There's always speculation and we are always looking at properties. Until there is a signed lease and a press release it's pretty much all fiction."
UPDATE: Please see the note at the bottom of this post.

Let's investigate. This what their current building looks like today: 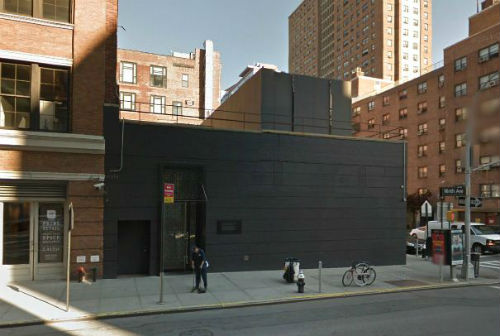 But the building's owner, Jamestown Properties, recently won approval to add two towers to the existing building. The more controversial of the two is a boxy glass addition along The High Line side of the building, but there is also approval to add another 80,000 square foot building directly on top of the existing Buddakan building. It will look something like this when finished: 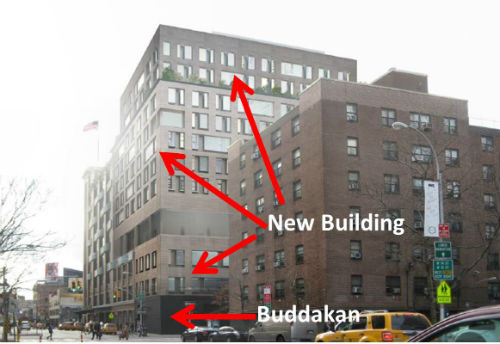 Jamestown expects to start construction on the expansion project sometime in 2015. It should last 18 months. It may be possible to run a restaurant while there is a major construction project happening above you, but it may be sub-optimal, especially since most of the building's mechanical systems appear to be on the roof. And let's not forget that Tao, New York's original Asian fusion mega restaurant, is in the midst of building out its new mega project in the basement of the Maritime Hotel that will be ready by the end of summer 2013.

There had been rumors that the tower would be a Buddakan branded hotel, but Jamestown appears to have dropped the hotel plans due to to political pressure. So maybe the search for a space in Midtown is not an expansion but more of a relocation. If you have any details, drop it in the comments or let us know.
UPDATE: A rep for Buddakan sends word that Stephen Starr and his team have no plans to move to Midtown, and they did not scope out the Haru Space at 280 Park Avenue. The rumor was false.
· Buddakan Coverage [~ENY~]
· Stephen Starr Coverage [~ENY~]
· Chelsea Market Expansion News [Curbed NY]