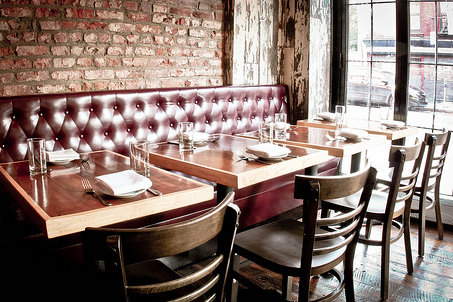 Monday night, we had an incredible New Year's dinner at Battersby – a perfectly executed five-course meal that was undeniably better than other restaurants' New Year's prix fixe meals. Unfortunately, our experience was tarnished by unacceptable treatment by the restaurant staff.

Upon arriving for our 10 p.m. reservation, we were told that our table was almost ready for us – the previous diners were in the process of paying their check and their dessert plates had already been cleared. The hostess suggested we go to a nearby bar and promised she'd text us when our table was ready. It seemed odd that there was no apology for our table not being ready on time, or acknowledgement of the fact that going to a bar and waiting for a text was the typical protocol for walk-ins and not reservations, but we understood that things can get backed up on New Year's, and saw no point in arguing. We did, however, confirm, "They definitely have their check, right?" The hostess responded, "Yes."

We waited outside for 15 minutes (we had no intention of going to a bar to spend money on drinks we didn't want and weren't going to finish), after which we peeked in the window to see that the diners at our table were making no signs of moving. We went back inside and were told that our table wasn't ready. The hostess had apparently forgotten what she'd told us the first time, and when pressed, acknowledged that she'd flat-out lied about the check having been delivered to the table. We returned to the vestibule (or whatever the name is for the small space between the restaurant door and the exterior canvas structure that's added in winter to keep out the cold), and the hostess came out and — finally — apologized. We explained that it was one thing to be asked to wait more than 20 minutes for a reserved table — which is unfortunate, but excusable if correctly handled — and another to be told we couldn't wait at the bar (where all the seats were occupied by diners) or inside the restaurant (which is admittedly tiny, but there would have been room for us to stand). We suggested that they might offer us a drink while we waited; she told us they weren't allowed to serve drinks outside, but offered to go get the manager. She also informed us, when we asked, that the party at our table had arrived at 7:45 p.m. and had not been made aware that there was a 10 p.m. seating.

The manager came out after a few minutes. Without looking us in the eye and without presenting even the vaguest apology, she sputtered something about the people at our table finishing their dessert, and went back inside. Shortly thereafter, two of the diners at the bar got up to leave, so we went inside to take their seats, only to be told by the hostess, incredibly, "You can't be here, I have other diners coming." Exasperated, we walked off, and the manager came after us, suddenly seeing fit to give us the bar seats, though we still had to suggest – for a second time – that they might offer us a drink while we waited. We sat down to eat at 10:50 p.m., almost an hour after our reservation.

From that point on, service was respectable. A few more people apologized for our wait (one waiter, who was particularly lovely, informed us that he'd been apologizing to customers all night), and the food was truly exceptional. Huge credit goes to the guys in that tiny kitchen who turned out some spectacularly intricate and beautiful dishes. But that's no excuse for the treatment we got. There was no grown-up in charge – no one in the front of the house whose job was to assure that the diners had a satisfactory experience.

There seems to be a prevailing notion among the better restaurants in Brooklyn (and certainly many places in Manhattan) that because tables are so high in demand, the rules of service no longer apply. Somehow it seems that the long-lived contract between restaurant and diner has ceased to exist. The restaurants have become exempt of accountability for anything but their exalted cuisine, and meanwhile the diners' end of the bargain has become increasingly difficult to uphold: we wait on line for hours to get a table, we're not allowed to be seated until our entire party is present, and now even when reservations are accepted, they have practically no significance.

Battersby is a fantastic restaurant. It deserves the praise it's been getting in the local and national press, and we're lucky to have it in our neighborhood. But if it wants to live up to that praise and if it wants to maintain the reputation it's established, it needs to ensure that its service is at the same level as its food.

· All Editions of Eater Complaints Dept. [~ENY~]
· All Coverage of Battersby [~ENY~]
[Photo]