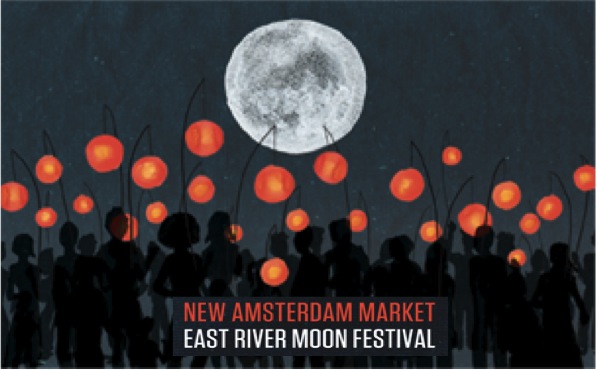 1) East River Moon Festival:
When: Sunday, 11 a.m. to 4 p.m.
Where: New Amsterdam Market
What: The New Amsterdam Market's first annual East River Moon Festival takes place tomorrow at the Old Fulton Fish Market. The harvest festival, which is celebrated by many in East Asia, kicks off with a traditional Chinese Lion Dance. Vendors will be selling Asian-inspired fare, including chef Simpson Wong from Wong, Banh Mi from Brooklyn Cured, Tom Kha Gai from Home by the Range, and Bulgogi from Black Tree Sandwich. There will also be a dumpling making demo and, starting at 6 p.m., free refreshments, moon cake, and a red paper lantern lighting. 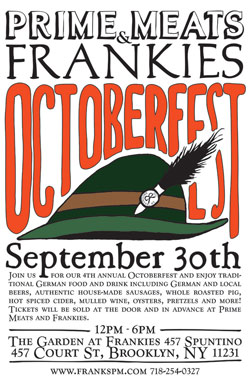 2) Octoberfest at Frankies 457
When: Sunday, 12 p.m. to 6 p.m.
Where: The garden at Frankies 457 Spuntino
What: Frankies Spuntino is teaming up with Prime Meats for the fourth annual Octoberfest celebration. Stop by Frankies 457 garden tomorrow for a feast of traditional German food, including a whole roasted pig, homemade sausages, apfelstrudel, pretzels, beer, and mulled wine Tickets redeemable for food and drink will be available for purchase at the door. 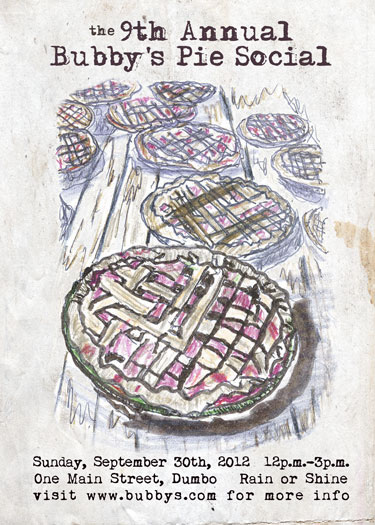 3) The Pie Social at Bubby's
When: Sunday, 12 p.m. to 3 p.m.
Where: Bubby's, 1 Main St
What: The ninth annual Pie Social at Bubby's takes place tomorrow afternoon at the restaurant's Brooklyn outpost. Amateur bakers are invited to submit their pies by 11:30 a.m. to be included in the pie social. The baker of the pie that gets the most "likes" will win a big blue ribbon. Even if you don't submit a pie, stop by for some sampling around noon. Tickets for non-bakers are $25, with the money going to benefit some New York City Public Schools, including P.S. 150 in Tribeca.

4) New York City WingFest
When: Today, 12 p.m. to 3 p.m. & 4 p.m. to 7 p.m.
Where: Center 548
What: The 2012 installment of the New York City WingFest is here. Over a dozen restaurants, including Hill Country Chicken, Dinosaur Bar-B-Que, Rathbones, Mason Jar, and Bon Chon, will be putting their unique twist on wings for the event. Guests will vote on their favorite wings to determine which restaurant will be crowned the King of Wings. Tickets are $55 and include a three hour open bar and all you can eat wings. 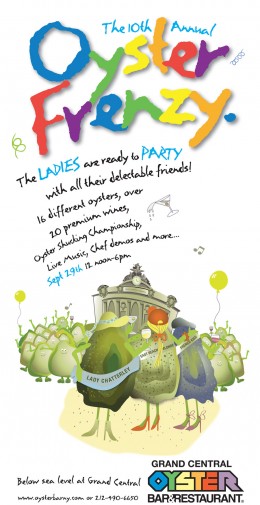 Also of Note: Both locations of Smorgasburg are on for this weekend. The Hester Street Fair and The New Amsterdam Market are both open for business as well. Madison Square Eats is ramping up with food vendors like Roberta's, Red Hook Lobster Pound, and Momofuku Milk Bar, while DeKalb Market closes up shop for the year. Looking to try a new restaurant this weekend? Try the new Leah Cohen and Fatty Crew collaboration project Pig and Khao, Brinkley's Station, a Gastropub from the Martignetti Bros, or The Flatiron Room, a New Whiskey Bar and Music Venue. If it's a piece of New York dining history you're after, consult Eater's guide to New York's 15 Most Iconic Dining Rooms.