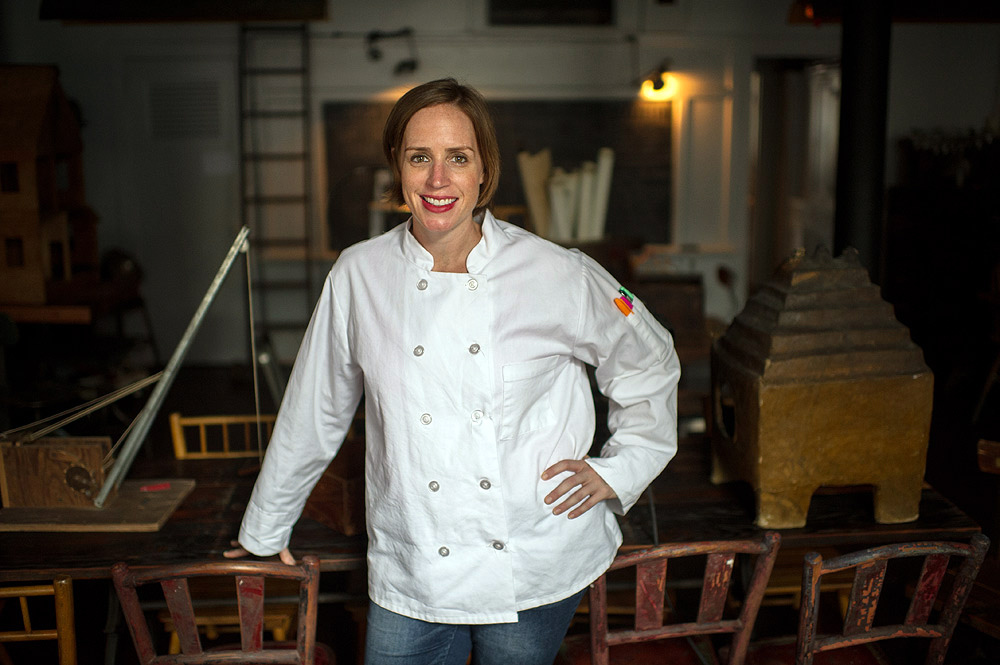 City Grit started out as a supper club hosted by amateur chef Sarah Simmons, in her apartment. Over the last year, it has evolved into an intimate restaurant inside an old schoolhouse in Soho, where anyone can try food from Sarah and some of the country's top up-and-coming talent. Sarah cooks during every service along with the visiting chefs, and she is responsible for providing them with everything they need. These days, Sarah and her crew play to a packed house, but it didn't start out that way. Here's a look back at year one:

How did you make the shift from doing dinner parties, to opening a restaurant? Sarah Simmons, chef and proprietor: I wanted a restaurant where I didn't have to cook the same food every day, and I didn't have to cook every day. It took me about six months to evolve the idea into what City Grit has become. I was traveling a lot, and every time I would meet a chef, the first thing they would say nine times out of 10 was, "Oh my god, I would love to come cook in New York." I started to realize that there was a demand to have a place where they could cook. The wheels started turning, and it started out really as something selfish, because I wanted a way to not cook every single day. Then it turned into something where I was thinking about filling the schedule three to four times a month with other chefs. Then it turned into something bigger than me, where I was only going to cook three to four times a month and then have this venue for hosting chefs. You know, being exposed to discerning diners and the food media can change the game for you. And if I can give that opportunity to a young chef who is just starting out, then we both win.

How did you find the space? I was using the kitchen for large catering jobs, and just as I was starting to look for my own space, the church was turning the thrift store into something else — they weren't sure what. They asked me if I wanted to use that as a dining space, and then it was just serendipitous that a couple of weeks later, we met the guys who design all of the furniture for the show room, and they were looking for a show room for all their stuff. I knew I wasn't going to serve breakfast and lunch, so we came together and decided that they would use the space as a show room during the day, and we would use it as a dining space at night.

When you started in this space, did you feel like you had a clientele that would show up every night? No. It really did take a good eight weeks to start to get the word out. And, you know, as close as your friends are, everyone has to be scheduled, and we didn't announce our first schedule until we opened. Literally everything came together in the dining room in 72 hours. It went from being a thrift store to what it is now almost overnight.

What was your first dinner? We did a Southern small plates dinner. I think it was eight or nine courses.

Who was in the dining room that night? It was a handful of friends. I feel like it was 900 years ago. There were some folks that had signed up for the list from word-of-mouth. There were some people from the neighborhood that had heard about it from the monsignor. It was only about 25 people at the first dinner, but it was a blessing that we didn't have as many people as we anticipated, because it gave us the chance to really work on the service. I've never run a restaurant before. The kitchen was hard enough to manage, but having to manage the front of the house while managing the kitchen was a huge undertaking. I had some servers who had worked for me when I did catering. They were great people and very hospitable, and that was more important to me than if they knew how to carry a plate to the table. We are on a mission to create a very casual fine-dining establishment. So, we want you to have the kind of service you would have at a four star restaurant, but without the pretention, and all the comfort you would have of dining in someone's home dining room.

When did people start coming in? The first month, we had Lee Anne Wong and Leah Cohen, and we did a cookbook launch for food52, so I think that those things got some press. People didn't understand what City Grit was in the beginning — they really thought of it as a pop-up. And even though chefs can have pop-ups at City Grit, we pay rent there. We're there all the time. Once we got that story told, more people started coming, and then it started to gain momentum in the late fall.

What were the challenges of working with so many different guest chefs? Oh my gosh, I don't know where to begin. As a group, chefs are not the most organized human beings. Especially because you are good at your job because you are cooking the same stuff all the time. We try to make it as easy as possible for the chefs. We do menu planning with them. We ask them in advance for the ingredients that we want them to have in house. One chef didn't get me his ingredient list until 24 hours before prep for the dinner started, so I spent 23 hours running around town buying all the ingredients retail when I could have gotten them wholesale.

How do you think that you have grown as a chef over the last year? It's hard for me to call myself a chef, because I feel like I haven't paid my dues. I've only been cooking professionally for two years. So even being able to say I'm a chef is humongous. I think I'm just so much more organized than I ever thought I would be. Especially when you're cooking for so many people with so many courses, it requires you to really think about the execution of the dishes. I made the mistake once of coming up with this amazing menu that required all six burners for six courses straight, and I certainly would have put a cold dish out in between if I had thought it through. But it makes you think about every single detail of how you are executing all of these dishes. And I think that I've become better at plating, and I've become more creative in thinking about how to execute these dishes. The food I'm putting out now compared to the food I put out a year ago is totally different, and I'm really proud of it and excited to keep growing. I have a lot more to learn.

Do you ever think about just opening a restaurant that serves the same menu night after night? I've thought about it. There are definitely some concepts in the next couple of years that I want to look into. I think that there is just so much excitement with...You can talk about yourself and your food all day, and what you're doing. But there is so much excitement in telling the other chef's story. I'm really in love with our concept. And for the next evolution of something that's not City Grit, I don't know if I'll feel the same passion if it's about me and my food.

What are some of your favorite moments from working with all these chefs? I loved Ty-Lor Boring's dinners. He did two of them. I went to Portland in April and ate at 20 restaurants in three days, and oh my God, the food there — everything about Portland is amazing. I came back with this idea that I wanted to do a Portland thing in NYC. I thought it was going to take forever to find four or five chefs to come all the way to City Grit for a multi-night series, and in less than four months, it all came together. Mike Gulotta from John Besh's restaurant, August, came recently and did "August in August." So, he did this great menu with Kelly Fields, who I think is one of the best pastry chefs in the country. There are so many.

Do you ever wish that a big critic would review this restaurant? I mean, I want Pete Wells to come, for sure. I don't want him to come to write about it, but I want him to come because I want to know his opinion on the experience, because I value it. It's not the media that I'm concerned with, it's getting the feedback from these people that eat at so many different restaurants. You compete with everybody else serving people food and taking their money, so it would be nice to hear the opinion of someone who eats out for a living. But I'm fine with not having any stars.