The Un-Guide to Drinkin' in FLAVOR TOWN

Share All sharing options for: The Un-Guide to Drinkin' in FLAVOR TOWN 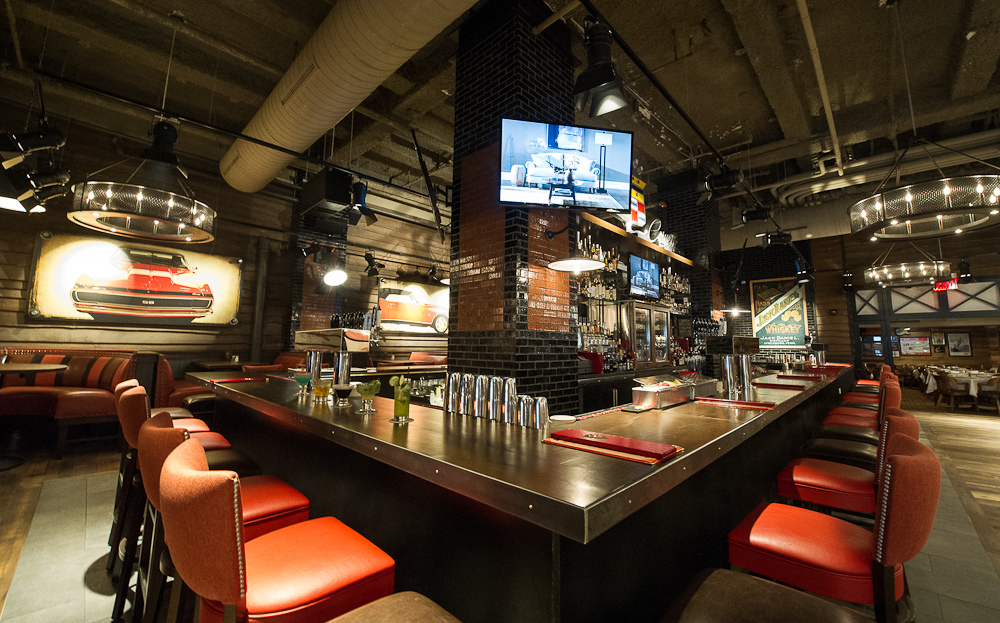 "Welcome to FLAVOR TOWN," screams the guy in the Dickies work shirt with "GUY!" in flames (or whatever) written on the back. He follows it up with "Have an awesome dinner," and swings open the doors to Guy's American Kitchen and Bar, which can only be described as mashup of Hard Rock Cafe, Pep Boys, and Hot Topic.

We grab a seat in the bar between two female tourists splitting a Miller High Life and a guy taking his girl out for an espresso martini—which, here in hell, is rimmed with white chocolate. I have an unobstructed view of Guy's merchandise wall, which is covered in everything from "Kulinary Krew" T-shirts to tattooed non-stick pans and a variety of other colorful garbage emblazoned with Guy doing his best ROCK ONNNNN face. My dining companion—err, victim—has a lovely view of the bar, which seems to have sold ad space to Rolling Rock, Pabst, and Jim Beam—or at least I hope they have. Why not? There is no shame here in FLAVOR TOWN, just Love, Peace, and Taco Grease!

First up, the cocktail list, which is a glorious piece of white trash ephemera—a love letter to food coloring and sugar. I go for the El Azul Watermelon, a mix of Tequila Blanco, watermelon, pineapple, and blue curacao rimmed with shocking-pink sugar. It's not so much a drink, as it is a cup of diabetes that tastes like a crackhead with a sweet tooth melted down blue raspberry Dum Dums, gum balls, and Sour Patch Kids and put it on ice. 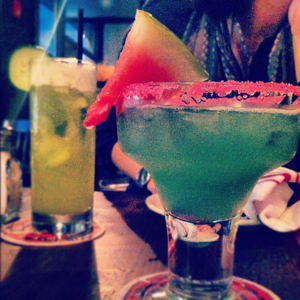 My dining friend thinks FLAVOR TOWN is really more of a midori kind of place and goes for the Ginger O.C., a mix of sauvignon blanc, Hendricks gin, midori, ginger liquor, pineapple juice, cucumber, and basil. This one is bright green and tastes a lot like gummy worms, which helps build on the theme of the cocktail list: drinks that taste/look like candy. Candy drinks!

On to the wine, which is a short list of gems from the bottom shelf of your local bodega, all long on residual sugar. For our calamari course it's a tough choice between the half bottle of Korbel (which retails around $8) for $44, or Sutter Home White Zinfandel (which retails for $4) for $36. The Sutter Home, based on nothing but sheer hilarity, seems like the better deal. Plus, the last time I drank Sutter Home it was in a four pack of half bottles and I barfed. It deserves a second chance. Turns out that the best thing about drinking it again is the irony of it arriving in a wine glass and the fact that I do not throw up. (Question of the night: "Which do you think has more residual sugar, the Sutter Home or the El Azul rimmed with pink sugar?")

The beverage program here isn't even trying to be good, which is why it's tolerable. Sommelier Levi Dalton summed it up best when he said, "It's like someone put a double-stock gun rack in a freaking station wagon." That is, it's so red neck that it's actually impressive. In the context of New York, it's almost as if it can't be real, except that it is. And the guy on the street doing his best Guy Fieri impression makes sure you know it.

As we walk out the door he's following a single male tourist halfway down the block. "Hey dude, what did you think of those ribs? Awesome, right?" He gives him a salutatory fist pump and turns around to jog back to his post under the Jumbotron looping videos of Guy Fieri pretending to cook.
· All Editions of Decanted [~ENY~]