Is Brooklyn Fare Home to the Priciest Wine List in NYC? 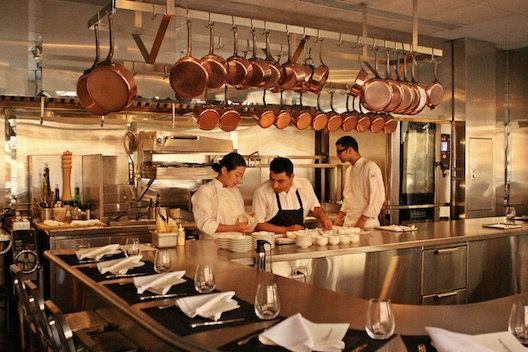 The heady BYO days at Cesar Ramirez's Chef's Table at Brooklyn Fare spanned 18 months that were like Woodstock for rich wine nerds. Brooklyn Fare was best BYO restaurant in NYC or, quite possibly, on earth. But while collectors were shooting corks off of magnums of Champagne, the restaurant struggled quietly.

"When Jean-Luc [Naret] from Michelin first came in, we couldn't fill the seats," says Michele Smith, Brooklyn Fare's General Manager and Beverage Director. "But I remember still serving insane amounts of caviar to guests, because Cesar would never compromise on quality. We did it because there wasn't another option in our minds."

Three Michelin stars and three New York Times stars later, Brooklyn Fare is a different restaurant. Even now, with the tasting menu priced at $225 (up from $135 in January 2011) and a proper, and pricey wine list in place, it's doubtful, given the cost of ingredients and the limitation of a single 16-person seating per night, that Brooklyn Fare is a very profitable restaurant. But it is certainly a far more expensive restaurant. And for wine lovers, the free love days are certainly over.

But before going headfirst into a thicket of Ryan Sutton-style price comparisons, it's important to note, first and foremost, that Smith (formerly a captain and floor sommelier at Per Se) has assembled a good wine list. It's a well-edited pledge of allegiance to the classic, traditional wines of Europe, void of scrubs and corporate concessions. It feels, just like the restaurant itself, uncompromising in its viewpoint.

"We wanted to put together a list of producers that are doing the same thing we are, in a sense," says Smith. "We see ourselves sort of like a small domaine in Burgundy — there are only seven of us working six-days-a-week with no PR, nothing promotional."

The core of the list centers on top names from Burgundy, Champagne, the Rhone, Germany, and Austria at prices that range from $60 (Francois Chidaine Montlouis Demi Sec "Clos Habert") to $18,000 (2000 Domaine de la Romanée-Conti "Romanée-Conti"). The list's vintage depth is impressive for how concise it is, but that depth comes at a price that often dips well into the four digits.

On the low-end, prices escalate quickly and mark-ups are the sort you'd expect from Jean Georges or Le Bernardin. But Brooklyn Fare out-prices both with its by-the-glass program. The average price for a glass of still wine is just over $25 and the cheapest will run you $18 (Clusserath "Trittenheimer Apotheke" Riesling Kabinett 2011). At Le Bernardin, for example, glasses start at $12 and at Jean Georges, they begin at $9. Corkage, if you're starting to wonder, is $90 per bottle with a maximum of two bottles, provided they do not appear on the wine list.

Depending on how you look at it, the list's unwillingness to compromise is either its greatest strength or, when it comes to pricing, its greatest weakness. Which side you fall on depends on the size of your wallet, perhaps, and whether you believe that a restaurant should feel obligated to provide more affordable wine selections regardless of how expensive the food menu is. Daniel, Le Bernardin, Jean Georges, and Eleven Madison Park offer wines under $60 and glasses under $18. Is Brooklyn Fare's decision to set their floor pricing so high too bold? Or is it understandable given their unique business structure? The comments section awaits.
· All Coverage of Brooklyn Fare [~ENY~]
[Photo: Facebook]