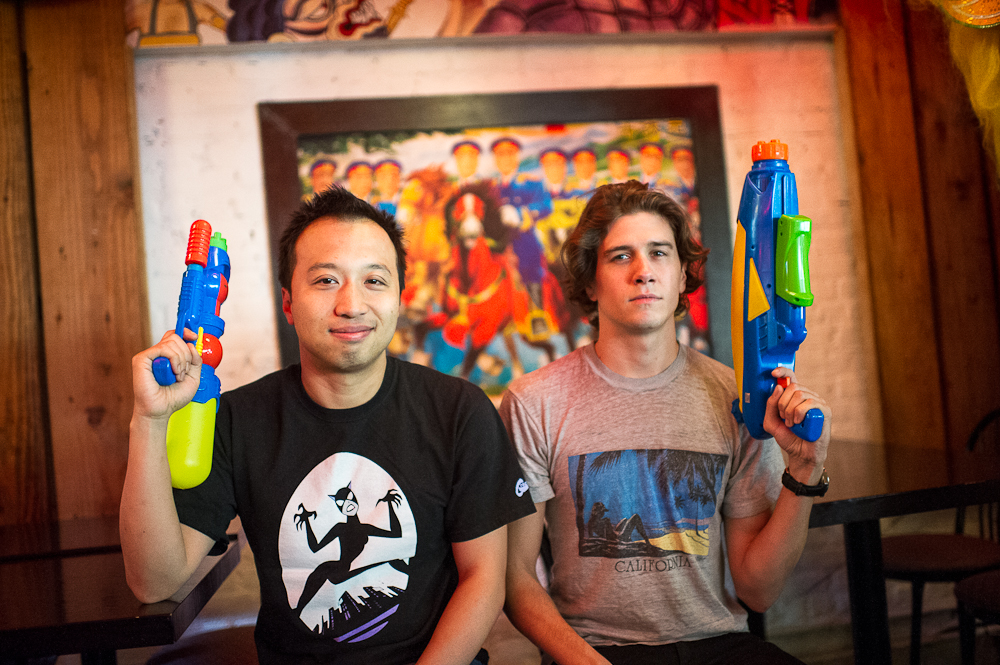 Danny Bowien's San Francisco import Mission Chinese Food opened on Orchard Street this May. In the four months since, the white-hot Lower East Side Chinese restaurant has been met with a wave of good press and long lines. Though it has a reputation as a hip destination, General Manager Allen Yuen and Assistant GM Aubrey Hustead are pleased that the restaurant has attracted a good range of customers, ranging from the "No Reservations Generation" that annoyed New York's Adam Platt so much (even though they do take reservations) to old Chinese families from the neighborhood. And about those long waits: As Hustead says, just "relax and enjoy the free beer."

When did you come on board with Mission Chinese? Allen Yuen, General Manager: Basically, I was looking for a job in January and I saw this ad on Craigslist that said, "High profile San Francisco restaurant looking to open in New York. Opening GM. Must be able to speak Cantonese." And I replied to that. A couple of days later I got a call from Anthony [Myint]?I didn't know it was him at the time?and he said, "Oh, do you know anything about the San Francisco food scene?" I told him that I had heard a lot about Mission Street Food, and he said, "Oh, that's great, we're going to open a restaurant in New York."

Aubrey Hustead, Assistant General Manager: I was in LA at the time, but I actually knew Danny and Anthony from San Francisco. I worked with them for a long time at Bar Tartine and then at the beginning of Mission Street Food. And through that, until they transitioned into Mission Chinese Food. At the same time, we opened our sister restaurant Commonwealth next door. So I moved next door and helped open that place and sort of skirted around working at Mission Chinese Food in San Francisco. Then I left, went down to LA for like a year-and-a-half. I came here for a friend's wedding and ran into Danny and we went out to dinner. He was like, "Oh, we're opening a place in New York, you should come help us out." So I went back to LA, talked to my girlfriend about it and a month later we were here.

It's 8 p.m. on a Saturday. What's the wait for two? Allen: You're looking at two hours.

Is there anything I can do to make that shorter? Allen: If you're nice it always helps. Being rude doesn't. Aubrey: I think the best thing you can do to make it shorter is relax and enjoy the free beer. It's funny because people always come back and check in on their wait. I guess in a roundabout way that makes their wait longer because it distracts me from doing other things. But it's totally natural. Allen: The thing is, we're so small we notice everyone that's waiting. So the people that are patient and they're just hanging out, we'll seat them quickly. We get through everybody though.

How hard is it to get a reservation at the bar or one of the high-tops? Allen: If you email a week in advance we'll definitely get you. Aubrey: It requires some planning I guess, but it's still not too bad.

That was funny with the Adam Platt review, where Danny had to tweet out that you actually take reservations. Aubrey: It's just a really small section [of the restaurant]. And I don't if it's more in New York than in San Francisco, but a lot of people call the day of seeing if we have any reservations. We don't, but we do save those seats for walk-ins, too.

Do you get any celebrities dropping in? Allen: Not too many. Mostly chefs and people who work in the industry. Aubrey: David Byrne came in one time, everybody was really excited about that. He was very low key, too. I don't think he even made a reservation. He just came in. And one time David Cross came in. That was awesome. Allen: Oh yeah, Aubrey was so psyched about that. I only know him because he was in Men in Black.

What do you do when a VIP comes in and doesn't have a reservation? Aubrey: They're always really cool about it. Especially with chefs and people who work in the restaurant industry, those are the people who are the most okay with having to wait. Nobody really gets special treatment.

Tell me about your favorite customers. Aubrey: Everybody's pretty awesome. The one thing I really like about this restaurant is that it doesn't really have a specific customer type to it. We get a wide range, like young hipsters, businessmen in suits, old ladies. I'm surprised at how many older Chinese families coming in. We were worried that people wouldn't really like us because we're not very "authentic" but they seem to be into it. Allen: Also the people who come in and they're not sure if they're going to like it, and then they wait two hours and they're real crabby, but then once they get their food they're so happy and think, "This is an awesome dinner."

What's your favorite thing about working here? Allen: I think we've created an environment where everyone's real friendly to everyone else. We're like a really tight family, both the front and back of the house, so there's not a lot of like?we don't blame the kitchen for things, the kitchen doesn't blame us for things. We all work really well together. Nobody yells at each other, which is awesome. You can actually tell people what to do and speak to them in a normal voice. Hopefully it shows, when the staff is walking around the dining room, that everybody's like really happy to be here. Aubrey: My favorite thing about working here might be the charitable aspect. That was something that was really important to me when I decided to come back here to New York to help open this place. One of the main things that I'd been feeling that I'd wanted to get back to?and one of the reasons I wanted to come back to working with Danny?was donating to charity, which I think is a very important part of what we do. It kind of ties into that sense of community within the restaurant and also the neighborhood. Allen: I also like that our food is affordable, so you can have a normal job and still eat here. Whereas if you were at a three- or four-star restaurant, you would see none of your friends ever.

Have you received any particularly outrageous requests? Aubrey: Sometimes we won't be able to accommodate a request with the food, just because so much of the stuff gets prepped out very meticulously so that the food can come out fast. So if people are like, "Oh, I don't like onions," we have to steer them to another dish. Allen: I don't know. Except for large parties calling, "I have 20 people showing up in 15 minutes," no, never.

What's the best thing to eat at Mission Chinese? Aubrey: The chicken wings, definitely. That's my number one. Allen: I thought you liked the pastrami the most. Aubrey: Well, for take out. We don't do the chicken wings to go, so whenever people ask me for takeout recommendations I tell them the pastrami. That is my number two, but the chicken wings are the best. Allen: I Like the thrice-cooked bacon. And the lamb, too. You can't get that at takeout. Aubrey: I'm in the minority. The staff favorite is definitely the thrice-cooked bacon. The savory egg custard is also one of my favorites. I feel like that's one a lot of people miss, because it's glossed over at dinner for bigger, more exciting dishes.

And where are you eating when you're not here? Aubrey I love Cheeky Sandwiches, which is right down the street on Orchard. They have an amazing fried chicken sandwich. Or Xi'an Famous Foods is also really good. I also like Vanessa's. I like a lot of cheaper, more low-key places. But I do like to go out and eat nice, too. A couple of weeks ago, Allen and I and my parents went up to Blue Hill [at Stone Barn], that was amazing. Allen: That was amazing, man. It's like the French Laundry of the East Coast, in some ways. I like Totto Ramen a lot, another place with a long wait. For date night or something I'll go to Prime Meats.

And what about drinks? Allen: Booker & Dax, we go there all the time. Aubrey: My other go-to spot would be Painkiller, it's a tiki bar down the street. Booker and Dax definitely for a more sophisticated cocktail, and Painkiller's become like the staff hangout.
· All Coverage of Mission Chinese [~ENY~]