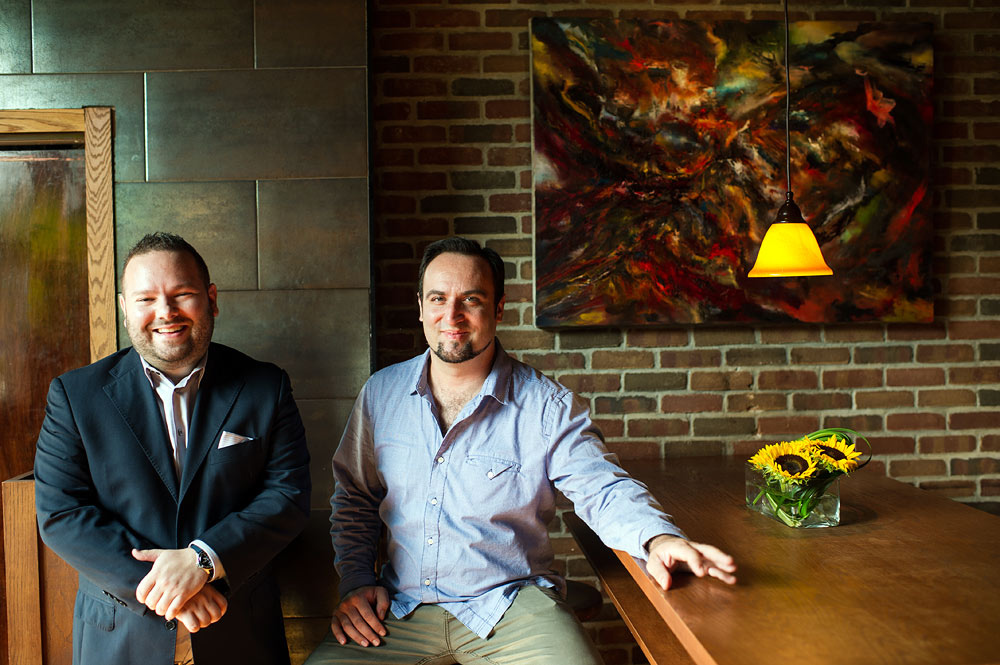 [Phil Johnson and Carl McCoy by Daniel Krieger]
In its short lifespan, Gwynnett St. in Williamsburg has developed a devoted group of regulars, many of which travel from Manhattan and outside of the city to sample Justin Hilbert's inventive New American cuisine. Unlike some of the neighborhood's critical darlings, Gwynnett St. is not ultra-hip, and you don't have to stand around for hours to get a table. And the food isn't the only attraction — owner Carl McCoy and maitre d' Phil Johnson run a comfortable dining room where you can celebrate a special occasion, or just pop in for drinks and dinner on a weekday night. Eater recently chatted with McCoy and Johnson about what the crowd is like on an average night, and how life at the restaurant changed after Pete Wells's glowing two star review.

It's 8 p.m. on Saturday night. What's the wait for two? Phil Johnson, Maitre d': I'm creative with the seating here. We're lucky to have these 10 bar seats, and we have 12 seats at these two communal tables up front. So you could have no wait, or sometimes it's an hour or an hour and a half. We take a wait list, but I'm very good about calling people, and people are great about coming back on time. But for the dining room, usually it's booked until about 10 p.m. or 10:30 p.m. But you never know — we have a lot of no-shows and cancellations.

Is there anything I can do to make my wait shorter? Any cash or bribes? Phil: No. You know what you should do? Doug makes outstanding cocktails, so really just order one of our cocktails. They're very thoughtful and really delicious, and I think that makes the time go by quicker. I also think politeness and niceness go a long way. You never know — I feel like I always make it work in the end.

Gwynnett St. was something of a surprise choice for Pete Wells. Did you expect him to review the restaurant? Did you spot him? Carl McCoy, owner and proprietor: We did. He came in with his parents and we were very busy at the time. We didn't realize who he was until I brought the bottle of wine to the table and he had already ordered everything. And then he looked me in the eyes and I looked him in the eyes. I said to myself, "That's Pete Wells," and then I ran straight back. This was the first day off that chef Justin had for literally two months. So I called him very quickly and was like, "Hey, I'm not telling you to come in, I just wanted to let you know that Pete Wells is in your dining room." He was eating at Isa at the time. I put down the phone, and 10 minutes later, he just walked straight through to the kitchen. The review itself just really showed us, and gave us a lot of credit. It was also on my birthday.

Did the phone start ringing? Were people obviously making reservations because of the review? Phil: It was immediate. Carl: May and June we were really, really busy. July through August in New York are slower, but it definitely gave us a boost and kept us consistent. Phil: When you printed the OpenTable reports after the review, they read "First time guest. First time guest." And now we have so many regular guests that are just trying to come back all the time — you see the names and the faces over and over again. Carl: We are continuing to change the menu, change the drinks, and change the wine. We are trying to make an effort to round out the experience and really focus on being casual with service, but serious enough that you get good service and it's professional. We really make an effort here. We have a great staff to give everyone a pleasant experience. Phil: We listened to Pete Wells. We fixed the lighting. He had a problem with it, so now things are a little more focused. Now every table has its own spotlight.

Tell me a little bit about your favorite customers. Carl: We have quite a range of regulars — some from Manhattan, some from down the street, some from Bedford Avenue, and some from the Philadelphia area. And it's great, and they're all completely different. We have a pretty famous artist, some Time magazine folks when they're doing interviews, and financial guys who come in because they liked the review and they love the food. And the neighborhood people and the locals are great — they're really supportive. I'm really happy with all of our clientele right now.

What's the strangest request that you've accommodated here? Carl: We had a couple come in one evening, and they were very dressed up for a special occasion — it was his birthday. We had just taken the steak off that night because we were out of it, and this guy had to have steak. This is one of the reasons I love working with Phil: he called around to other restaurants in the area that were really close by. We know some guys at Brooklyn Star, and we talked with Bill. We told him these people were coming and they wanted steak, and they would be the next two people there. And there they were. That was one of those situations that could have been a disaster, but we still tried to a find a way to improve it.

So you sent them to another restaurant? Phil: Yeah. I just want to make people happy. If we can't do it here, I just want them...sometimes you just want a steak. Usually we have one. I just wanted them to get what they wanted. Hopefully they'll come back soon.

What's your most important tool for working in this dining room? Phil: I'm going to say this and nobody ever says this on Gatekeepers, but OpenTable. There's a new version of OpenTable called Flex. I think at first a lot of people hated it, but if you really learn how to make it work for you by programming it, it's completely dynamic and powerful. We have a mix of reservations that people plan a month in advance, to walk-ins, to a long wait list at the bar, and OpenTable Flex let's me do all of them at once. I think it's amazingly powerful software, and they didn't pay me to say this. Also: comfortable sneakers. This is the first time I can wear sneakers at work. Comfortable Phil is a happy Phil.

Where do you guys like to eat when you're not at this restaurant? Phil: I eat a lot. I like 15 East and Soto for sushi — I think they're incredible. I really like Joe Campanale's Dell'anima and Jason Denton's Corsino. Those two guys are like the sweetest, warmest, nicest people. And Marea. I've seen Francesco at Marea, and I think he's a super cool dude. That's a start. Carl: I don't get out to eat as much, but when I do...I went to Momo last night and I had their tasting menu. I like to go to wd-50, and I really like the new Il Buco. It's amazing. I really like Osteria Morini, as well.

When somebody asks, 'Okay, what kind of food do you server here?" What do you tell them? Phil: Somebody actually called and said, "Do you guys serve food?" and I said "What do you mean." and she said, "Do you guys serve real food?" I think people read about wd-50, but I think the food is just totally accessible. When the dishes come in front of you, you know what's on the plate. Carl: If you see the chicken on the plate, you know that it's chicken. You can see the lamb on the plate and know it's lamb. All of the other components are done in varying techniques that these guys have developed. Over the years, they've worked with guys like Wylie Dufresne and Dan Barber, and they've really honed their skills and they make it approachable for anyone. Phil: I definitely think that we don't want to be clever, we just want the food to be delicious. Carl: "New modern American," I suppose.
· All Coverage of Gwynnett St. [~ENY~]